In Which There is a Coffee Percolator going Wheeeee!! 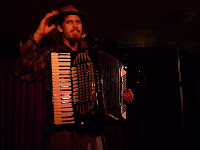 his upcoming shows. At first, I thought I wouldn't be able to go, as the weekend ones (one in Brighton, just down the road from where K&C live) clashed with my Aunt's party which I was already comitted to attending, but then I had to cancel a day off work whcih I had planned, one or two things in my work diary moved, and I was able to book a day off and book a ticket for the London gig, on Monday night! 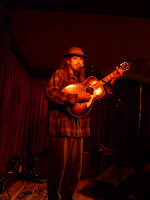 So, Monday found me rushing out of work, dashing home to feed the cat and legging it to the station to get to London...a couple of hours later, after having booked in to my (very cheap) hotel near Kings Cross, and reassured myself that it did not, so far as I could tell, also rent rooms by the hour, I headed off to Camden. A few wrong turns and a vietnamese meal later I was wandering along Camden High Street , round a corner and to the Green Note which is a very small, but perfectly formed venue - it's also a restaurant, but sadly the kitchen wasn't open, which was a shame, as the specials board on the wall had lots of tasty sounding dishes! So in the absence of food, what I found was a small bar, with lots of little tables, and the worlds teeniest stage tucked into one corner.
Finding an empty table near the stage (although it would be impossible, given the size of the room, to find a table very far from the stage) I asked the couple sitting at the next table whether it was free, as one does. After saying that it was, I noticed that she was giving me odd looks, and I started to worry that perhaps I'd upset them. Then she started asking me about where I was from . . . a few moments later, (as In panicked that she was a former, and potentially unhappy, client of mine) we established that she was a former colleague, having been an office junior wit 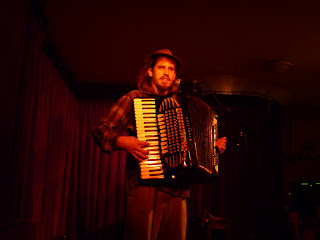 h us 5 or 6 years ago. I'm notsure whether to be more impressed by the fact she recognised me after so long, or amazed at the coincidence - given that the venue was so small, and neither of us knew the other was a fan of Jason's... It certainly improved the evening, having good company!
So, after that interesting start, came the music.
Which, for the record, was fantastic. It was a most interactive gig. Not only was Jason taking requests for songs (whether or not he actually knew them - turns out he can play 'Oasis' but gets stuck in the lyrics round about the word 'barbarian'....) but was also enrolling us to sing the violin and trombone parts as required, and to join in with the music, with much encouragement. There was considerable Stomping, too.
Mid evening, during the break, I was able to get my 'counterpoint' CD signed (on reflection, I think Jason still has my Sharpie..) and say Hi to Jason. Told him I heard about his music via the Fabulous Lorraine and several of her fiends, (to whom he sent his best wishes)
For me, particular highlights were 'Eleven Saints' (Why yes, we did join in with the 'Wheeee's ), 'Dance While the Sky Crashes Down' and, much, much later in the evening, 'The Drinking Song' Mr webley's instructions "Look, I don't care if you don't know the words, just sing them loudly" (gap with raucous singing) "OK, my bad, I forgot to teach you the other part. It's 'Yo da dee, Yo Daah Dah'. It's russian"....
We were then critisised for not being drunken enough (that's what happens when it's a Monday night, y'know)
It turns out, that if you stand up, raise your right finger (proud and erect) and then focus on your own finger and spin round in circles, you do achieve a very close approximation to being drunk. (but without the hangover) Who knew? I am not 100% sure that this improved the Quality of the singing, but, combined with the hugging of neighbouring strangers and the swaying, it certainly increased the volume and the good humour!
Sadly, 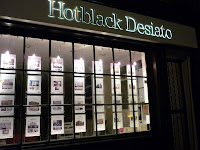 that marked the end of the evening's music, although there was still time for a quick sweaty hug, and then we (Jenny, her bf and I) walked back to the tube, passing, on our way, this estate agency, which I belive to be the one from which the late, great, Douglas Adams borrowed the name for his character!

Now, if Mr Webley can just be persauded to come back in the very near future.
Posted by Marjorie at 6:42 pm

That is exactly it! Did you go back to your hotel room singing in your head (or even humming) Yodadees too?
I could not sleep.
My negotiation meeting the day after was VERY surrealistic (caught myself on the brink of error a couple of times too).
I am impressed that you could take a full figure shot of Jason. Our venue was mostly standing room so all I could see was his face (and some times not even that).

Now I've joined the mailing list....gotta see the guy everyone raves about!

I am so impressed at how much you live life. You, too, are a goddess!