Playing in The Dark - Neil Gaiman and the BBC Symphony Orchestra

I like Neil Gaiman, and I like music, so when I saw that Neil was going to be reading from some of his works, with accompanying music from the BBC Symphony Orchestra, of course I needed to get a ticket, and to add to the enjoyment, I got to hang out with some friends before the show.

We met up for  some delicious Chinese food and lots of conversation, then we had a brisk (and partially unplanned - thanks, London Underground!) walk to the Barbican, where we split up (as we had not booked at the same time, so had separate seats)

I had a mild panic, as just after I sat down another woman with a ticket for the same seat also  showed up, but happily the Barbican staff were able to sort it out (it turned out that the other lady had a different seat allocated to her in their system than the one on her e-mail confirmation, so no-one missed out.

The format of the evening was Neil reading from his works, and  introducing pieces of music, mostly with a brief explanation or comment about what the music meant to him, or why he chose it.

The  readings and  pieces of music were, in order;

April (from 'A Calendar of Tales'
Walking the Dog (Gershwin)

There is a link here to a recording of her reading it to the music, on a different occasion

The Ride of the Valkyries (Wagner)
Norse Mythology (Fenris Wolf)

Then,  just when we thought the show was over, Neil returned to introduce a special guest to give a reading from Good Omens, everyone's favourite less-than-wholly-evil demon, Mr David Tennant.

He read from the scene where Aziraphale and Crowley are drinking in Aziraphale's bookshop, and he was glorious! The narration was in his own (Scottish) voice, but the dialogue he did in his Crowley voice, and in a superb Michael Sheen as Aziraphale .

We didn't get to hear hear the extra verses of Nanny Crowley's lullaby, which I had thought might be a possibility, when I hears that he was appearing, but one can't have everything, and we did get a lot!

And people have been having fun with the photos of Neil and David doing their respective readings, as you can see above!

We also got to hear the Good Omens  theme played by the full orchestra, which was wonderful! And both for that, and for David'd reading, the stage was lit, half red, and half golden white,

All of this took far, far longer than the advertised run time, which  is probably why the broadcast which goes out on Christmas Day will, I think, be edited and won't include David's reading, but I may be wrong (or the BBC may change their mind!)

Because I am very fortunate in my friends, I got to go to a party afterwards, and while that and the over-running show meant I missed the last train home, and had to find a hotel at very short notice, it was such a fun evening that it was worth it all!

The Lion, The Witch and the Wardrobe - Bridge Theatre 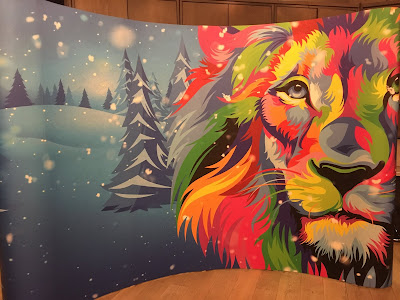 After seeing Lungs I spent the evening at the Bridge Theatre, to see their new production of The Lion, The Witch, and the Wardrobe. The play was originally staged 2 years ago in Leeds, and the 'Aslan' puppet from that production hangs in the foyer at the Bridge, having been replaced by  a bigger version for the show.

The Narnia books meant a lot to me growing up, and I remain attached to them despite their flaws, so I was a little apprehensive about whether the show would do them justice. 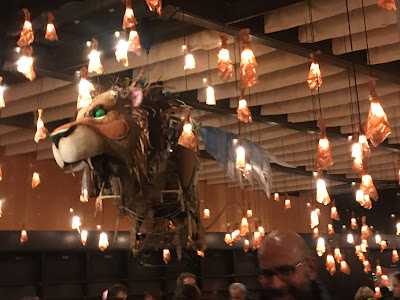 However, I felt, on the whole, that it works pretty well, although not everything is to my personal taste - I could happily have lost most of the musical numbers and felt the initial sequence (of  the Pevensie children being evacuated) while very clever, goes on too long. Given that this is a show aimed at children, and already goes on for almost 3 hours, I did feel that it could be a little shorter and tighter. In fairness, I did go to the first preview so it may move along a little faster once it beds in.


The set is relatively simple, the stage mimics cracking ice, and other effects include parachute silk billowing across the stage as snow, gauze drapes to show those characters who have been turned to stone, and a live, on-stage band.

The White Witch owes more to Tilda Swinton's portrayal than to the illustrations in the book, and  Laura Elphinstone manages to portray her as frightening without being too 'pantomime villain. (production image here Wil Johnson as Aslan is as very impressive, although I can't help but feel that having the Lion puppet absent during some of his time on stage doesn't quite work for me, it doesn't seem quite in keeping with the spirit of the books!

However, despite these minor niggles, it is good fun, and very clever,with lots of humour, and some very clever staging. Definitely a fun christmas show, which children will enjoy.
Posted by Marjorie at 8:32 pm No comments: 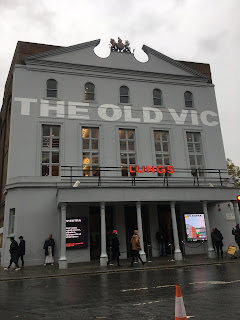 I haven't previously  seen either Matt Smith or Claire Foy live on stage, although I am of course familiar with both of their works on screen, so I was interested to see Lungs, which is  short, two-person play, about a couple dealing with the practical and ethical issues of whether to have a child, in particular the ecological impact of doing so.

It's often funny, but ultimately pretty bleak.It shows the couple making compromises - with their principals, with their ambitions and even their relationship, and trying, if not always succeeding, to  do the right thing while also trying to keep the things they want from life.

Both actors give excellent performances, although neither character is entirely likeable - and while they remain a couple I was left with the nagging feeling that they might both have been happier apart. I also felt that the play started to falter a little towards the end, when we jumped forwards decades.

However, despite having somewhat mixed feelings about the play itself,  it was an opportunity to see two excellent actors, and to see them in a production where the lack of other performers, or props, or anything but the most minimal set, meant that  the focus was very much on the actors, and they rose to the challenge

The performance I saw was the last matinee, but had the run not already ended I would be suggesting that you see it, if you could!
Posted by Marjorie at 8:11 pm No comments: