A Couple of Quiet Weeks

I had a very important responsibility recently, as my neighbours went away for half term, and entrusted me with the care and feeding of their nearly new guinea pigs. I had guinea pigs of my own, many years ago, so I felt quite nostalgic. I'm sure mine used to shout much louder, though, and as these ones are smooth coated they seem smaller than I remember (although that may also be because I'm bigger now!)

Anyway, they survived being in my care for a week, and let me stroke them, although Loki sniffed my hands and coat very suspiciously each time I came back, and is probably wondering why I never want to hold the rodents he brings me!

Last weekend should have involved me travelling North to spend the weekend with friends, but unfortunately they were unwell, and I was unwell, so we agreed that me driving 200 miles so we could all exchange germs was not a good idea.

It was undoubtedly the right choice - I ended up spending most of the weekend curled up on the sofa doing nothing more energetic than making cups of tea, and finding even that amount of activity rather exhausting!

This weekend has been equally quiet in its own way, but I'm feeling much better, so have been able to do lots of dull but necessary stuff, like washing floors, general cleaning and housework, and so on. I also did some baking, which I enjoy, so my co-workers will get double chocolate chip cookies and walnut and dark chocolate biscuits tomorrow.

This weekend has bee one of extreme (for this country) cold, but also, today at least, bright sunshine, so lots of beautiful blue skies, and  very bracing walks down to the shop for the weekend papers. We are told that there may be snow later in the week, although I think only fairly light showers, here. All of which meant that I was able to put all my washing outside to dry, which made a nice change, and that Loki has been forced to drink from his own water dish, as the various planters etc. outside,  which collect rainwater, and which he likes to drink from, all all frozen over.

I am very thankful that my central heating works so well!
Posted by Marjorie at 7:09 pm No comments:

Imperium at the RSC

It is fair to say that back in March, when I booked to see the RSC's 'Imperium :The Cicero Plays' (based on novels by Robert Harris), and decided that since it is 2 plays, it would make sense to see both on the same day, they had not yet announced the run times. If they had, I am not 100% sure that I would have chosen to see them both on the same day..

The plays cover the period of Roman history around Julius Caesar's (Peter de Jersey) rise to power, his assassination, and Octavian's subsequent rise, as seen through the eyes of Cicero (Richard McCabe) and his secretary, Tiro (Joseph Kloska). 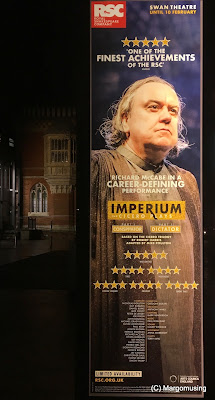 We start out with Cicero's election as Consul, defeating patrician Cataline (Joe Dixon), who is Not Pleased (after all, it was his turn!) Cataline steals every scene he is in, with his gloriously over the top villainy!

As the play continues, we learn about the Cataline conspiracies, as Cataline, having failed to win election to a Consulship, attempts to get there by foul means rather than fair. (of course, an historian might point out that one of the main sources of evidence is the writings of Cicero, who was not exactly impartial, and who made his name by suppressing the Cataline conspiracies. But lets not be picky!)


Cicero's secretary, Tiro, acts as narrator for the plays, bringing the audience up to speed with backstories and explanations, not to mention seeing things more clear-sightedly than his master at times!

Particularly having seen Julius Caesar so recently, I enjoyed seeing the same events and characters from  a different perspective - Brutus, in this version, is not the passionate but flawed leader we know from Shakespeare, but rather a rule-bound man, anxiously reviewing points of parliamentary procedure as Rome collapses into civil war.
Julius Caesar is an amoral, manipulative, power-hungry politician, and Mark Antony (Joe Dixon again, Cataline having wound up with his head in a bucket at the end of Part 1) originally appears as a belligerent and none-to-bright drunk, before showing himself as a military force to be reckoned with, and young Octavian (later Caesar Augustus) (Oliver Johnstone) is a much more subtle chip of the old block, who is disastrously underestimated by Cicero (and pretty much everyone else)

The script was fun - lots of direct addresses to the audience, mainly by Tiro, but also by other characters who addressed the audience as if they were the Roman Senate, or people, and of course there were also a few topical allusions, and a sneaky nod to Oscar Wilde "To lose one Consul may be regarded as a misfortune, to lose two..."

I felt, too, that he cast was very strong  - although regrettably (if perhaps inevitably, for a play about Politics in ancient Rome) rather short on women.

The performances I saw were the last ones, so you can't go to see it, but if you are like me you might decide to give the books a chance...
Posted by Marjorie at 4:54 pm No comments:

We don't go in for such things as a general rule, in this country, so when I heard a sort of rumbling thump and felt the house shake, 'Earthquake' wasn't my first thought - I had a confused thought that there might have been a road accident, or that something (like the chimney) had fallen through the roof.

(actually that's not quite true. my absolutely first thought was that the Cat had done something unspecified, but as soon as I realised he was  in his hammock, giving me a dirty look or having woken him up, my thoughts went to accidents not earthquakes. But I have learned that earthquakes are another of things which, according to the cat, are entirely my fault)

But it seems that there was a 4.4 Magnitude earthquake, centred on Cwmllynfell in South Wales, which is around 70 miles from here, as the crow flies (or the tremor travels)

It's my first earthquake. Or at least the first I've noticed. A quick perusal of the BGS's website shows me that it is the 16th earthquake in the UK this year, although larger than most - apparently we get one this size about once every 2 to 3 years. Just never one which I've personally felt, before.

It doesn't seem to have caused any damage here. The pictures on the walls rattled, my toothbrush fell over, and the sparrows outside went quiet for a moment or two, but that's about it.

Very odd sensation, though, and I am glad we do not make  habit of having them.

(all my Californian friends, and others in earthquake zones may now laugh!)

After my theatre binge in January, things have been a little more low key  - I've been at home and at work, the weather  has been cold, and wet, and windy and unappealing, and I've had issues with my car.

I was driving home and my car started to lose power and basically no go at all - complete with flashing dashboard light. Quick stop to check whether this is a 'do not drive another inch' light or a 'limp to a garage' light. It turned out to be the latter., so I crept home, (probably annoying anyone behind me, but fortunately it was a Sunday morning so not too much traffic) .

When I got home I was able to speak to my mechanic (who is usefully also my neighbour), who said "that sounds like a coil", and that this meant that it would not be firing one one of its cylinders. I'm familiar with the idea of not firing on all cylinders as a metaphor, and now I understand it!

So on Monday, Neighbour took my car with with him to work (happily I'd booked the day off so didn't need to work out alternative transport) and brought it home that evening, restored and ready to go, and with a new coil and some spark-plugs ( I think)

Then a week later it was off again to have its MoT test, which it passed with flying colours, so that's done with for the year.

Last weekend I made a small batch of marmalade, which is something I enjoy doing, (plus you end up with delicious marmalade) 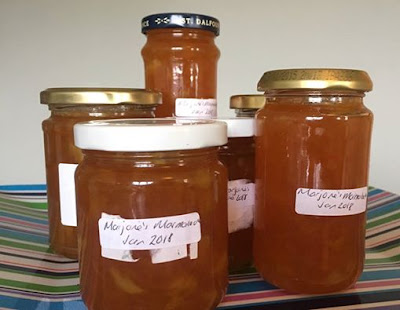 I've still got another 2 or 3lbs of oranages so will make another batch soon.

I have planted out some mini-daffodils, although so far no buds or flowers. Hopefully they will come out soon. So far, all I have is a few primroses.There are lots of snowdrops in the headge-bottoms, but none in my garden.

And still it rains.

This weekend, so far I have mostly been baking, and batch-cooking stuff for the freezer.  Still to do: deep cleaning the kitchen! (who says I don't know how to party?!)
Posted by Marjorie at 10:00 am No comments:

Julius Caesar at the Bridge Theatre

I enjoyed my first visit to the new Bridge Theatre, to see their opening production, Young Marx, in November, so was looking forward to going back for their first Shakespearean production, Julius Caesar, which features David Calder as Caesar, Ben Whishaw as Brutus, David Morrissey as Mark Antony, Adjoa Andoh as Casca and Michelle Fairley as Cassius.

Which is quite an impressive cast, I think you'll agree! 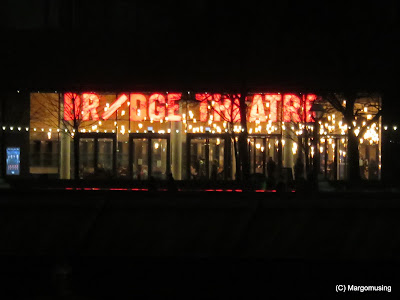 For this production, the seating in the stalls has been removed, and the galleries extended to the 4th side of the theatre, creating an arena-style central area, where the audience members who had bought 'promenade' tickets were allowed to stand.

As we waited for the play to start, the promenaders were given the chance to buy nuts, and drinks, and badges and red baseball hats supporting caesar... 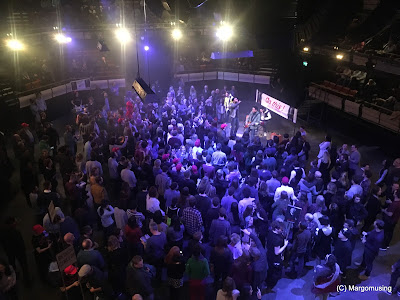 And in keeping with that, the production is in modern dress, and there's something worrying familiar about Mark Antony, particularly once he starts to make speeches...

I was curious about how the 'promenade' style would work, and how easy it would be to see the action, but it turned out that there were various 'blocks' which came up and down as and when needed, with the audience moving around them, which worked well both to keep the actors visible and also to take the place of scene changes. 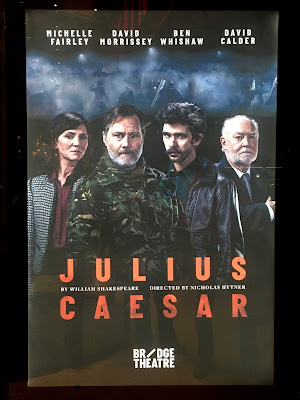 Ben Whishaw's Brutus is presented as a liberal, intellectual man  - when we first see him at home he is seated at  desk with lots of books - I admit I was a little distracted trying to read the titles of his books (they included books about Franco and Hitler, that I could see),vehemently opposed to tyrants and nepotism, but unfortunately a bit short-sighted in dealing with others.

Michelle Fairley makes an excellent Cassius, passionate and much more astute than Brutus -  shes' not an actor I am particularly familiar with but hers here is a stand out performance.

The promenade audience are showered with political flyers, with balloons, and follow the actors around the stage. It's very dramatic, and it must be amazing to be part of that (I'm considering going back to see it from that angle!) 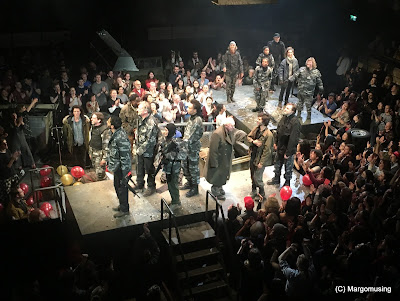 It's a superb and very timely production - well worth seeing. It's on at the Bridge until 15th April, and is being shown in cinemas via NTLive on 22nd March. (and presumably other dates internationally) I'm sure the filmed version won't be as stunning as being there in person, but it will be a lot better than not seeing it at all. Go if you can!
Posted by Marjorie at 10:42 am No comments: