I haven't blogged because I've been doing little other than getting grouchy at work, and sleeping badly at home, which is a bit of a vicious circle.

Most of the time I enjoy my job or at the very least feel that it is useful, but there are times when it is like banging my head against a brick wall. There is nothing so frustrsting as watching someone dig themselves deeper into a hole, while all the time refusing all the help  you are offering to get them out of the hole. Except maybe the part where they then turn around and blame you for throwing them into the hole. *le sigh*. (and yes, I see the mixed metaphor. This is a special brick-lined hole, 'Kay?). Sooner or later, it'll swing back the other way, I'll get a client who is appreciative, or an outcome I can be happy about.

On the plus side, I do have lots of good, supportive friends, for whom I am very grateful.

I also have quite a few things to look forward to -my sisters both have their birthdays in March, and we are planning to meet up (K has a landmark birthday this year, although she isn't planning a massive party) and I shall also get to see K&C's new flat, which should be fun. Then I'm going to see Lenny Henry at the start of April, and a week later my friend J will be coming down for the weekend, when we have tickets to see Derek Jacobi in King Lear. (And later in the summer, I shall be seeing David Tennant & Catherine Tate in Much Ado About Nothing ) And today I went into Bath in order to collect tickets to hear China Mieville speak, at Mr B's Emporium, one of our local Independent bookshops. I gather that they have aready sold out the event, and have a waiting list, so I'm glad I booked as soon as I heard about it!

So I'm planning to focus on the good things which are coming, not the bits of now which make me grumble.

well, that and chocolate!
Posted by Marjorie at 8:44 pm 3 comments:

Email ThisBlogThis!Share to TwitterShare to FacebookShare to Pinterest
Labels: and not so much fun, fun stuff, Work

In Which There Is a Castle, A Floor, and Family 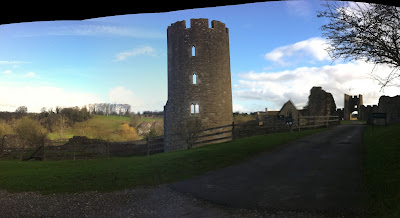 My younger sister came to visit this weekend, partlly in order to see me, and partly in order to collect some wood flooring from my other sister's nearly-in-laws, which  they no longer want but which my sister does. As I live about 40 minutes from their home, it's easier for E to visit me & make a trip to pick up the flooring, than to come all the way from her home. 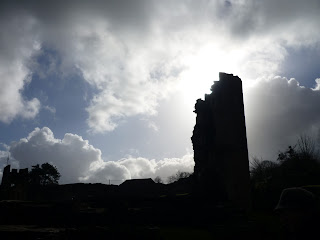 She arrived on Friday evening, and we did some catching up. On Saturday it came a nice bright sunny morning, so we went out to visit Farleigh Hungerford Castle, which is a ruined castle a few miles from here - I pass it on my journey to work every morning.


The castle was originallly built in the 14th century, althugh there were considerabe changes and additions in the 15th century, and the place fell into ruins after the civil war. 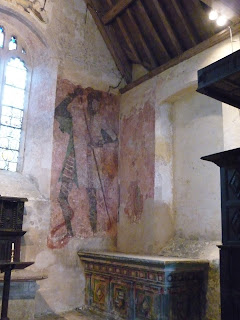 The Hungerford family had their share of dodgy ancestors - including a charming lady in the 16th Century, who murdered her 1st husband in order to marry the lord, and was eventually tried and executed after her 2nd husband died, and her step-son inherited the title.
The son apparently later went mad,, and kepy his own wofe imprisoned in one of the towers, where she was fed by baskets of food sent up by local villagers!
Within the castle is a small chapel where there is a surviving medieval wall painting of St George, which was preserved by having been plastered over  (also another painting of the Hungerford's coat of arms, which was apparently painted about 100 years after they lost the title and the right to the coat of arms. Obviously they weren't finding it easy to accept!) 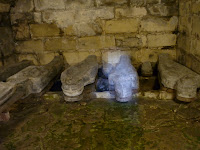 There is also a crypt, which has some rather grim lead coffins, dating to the 1600's, with death-masks over the heads. however, you cannot go right up to them because there is an iron gate in the way. Tnis was apparently put in in the early 1800's becuae visitors were poking sticks through a ghole in one of the lead coffins in order to (And I am not making this up) TASTE the gloop inside.
I mean, what kind of person stirs the contents of an old sarcophagus with a stick and then thinks, "y'know, I really wonder what this tastes like"?!?
After leaving the castle, we were going to visit a Barrow which is supposed to be near by, but we were not able to find it, aand decided not to risk taking the car up the very narrow, very steep & very muddy lane which seemed the only one ging in the right direction. Instead, we headed over to Bradford on Avon for lunch and cakes, then down to Dorset to pick up the flooring.
Today, we had had thoughts of going to Bath, but as it turne out to be a miserable grey, rainy day we ended up having a lazy morning & brunch, then E headed home, and I turned by attention to fun stuff such as laundry, housework, and blogging.
Posted by Marjorie at 4:17 pm No comments:

That's my excuse for the lack of blogging recently, anyway.

I did get up very early on Tuesday to talk (extremely briefly) on local radio about the cuts to Legal Aid, and why they are a bad idea. (Not least because of the fact that, in the long term, they almost certainly mean higher costs)

I got pretty nervous beforehand, but I think it went alright, although probably not terribly interesting unless either you're me, or you're about to get divorced and expect to need legal aid.

This weekend I think I am going to be having a visitor, and helping to move a floor.
Posted by Marjorie at 7:32 pm No comments: