In Which There is A Monster

I had hoped that I might be able to get a ticket to see Frankenstein at the National Theatre, but sadly it sold out so fast  I missed my chance.

However, all was not lost, as there were to be two performances filmed and broadcast live to cinemas, and I did manage to get a ticket for one of them, for Thursday evening.

As you may know,one of the features of this particular production is that the actors playing Victor Frankenstein and the Creature are alternating the roles. I saw Benedict Cumberbatch as Frankenstein and Jonny Lee Miller as the Creature, and I would love to see it with the roles reversed, to see how much changes.

The evening didn't start well, as it seems that the cinema had made a mistake and listed the show as starting at 7.30, when in fact it was 7! Luckily, this just meant that I had no time to grab anything to eat bfore the performance started, rather than meaning that I missed the start!

It is  a great play. It is in many ways more faithful to Mary Shelley's original novel than most of the film versions, in particular, the creature has, as in the novel, an articulate voice.. although not to start with!

The play starts with the Creature's "birth" and we then see him in a long, dialogue-free section of the play as he explores his body's capabilities, gradually learning to move, sit, and eventually to walk, and to explore the world around him.

We then see Frankenstein's rejection of his creation, and then the reception which the Creature gets as he goes out into the world. There was a lovely, if slightly inexplicable SteamPunk train, some fancy stage engineering and some unexpected humour to lighten the mood.

Unlike many versions of Frankenstein, this one presents a sympathetic Creature, despite his own murderous behaviour., and challenges Frankenstein's behaviour in creating, and then abandoning the creature. The Creature is the undoubted star of the show., and the issue as to who the monster is remains in question.

I thouroughly enjoyed the play, and I still want to see the live version, and the alternate version with Benedict Cumberbatch as the Creature, and Jonny Lee Miller as Fankenstein.
Posted by Marjorie at 7:07 pm No comments:

I woke up on Saturday morning to learn that Diana Wynne Jones had died. 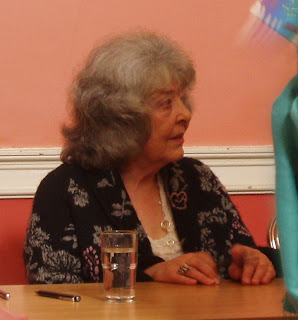 I only ever met Diana once, when she appeared at the Bath Festival of Children's Literature in 2008, but she has been one of my favourite writers for over 20 years, and knowing ahe has gone leaves a little hole in my heart.

I remember when I first found her work. It was in 1988, and I came across 'The Lives of Christopher Chant' in my local library, and fell in love.

In the years that followed, I searched out everything she wrote. It wasn't always easy, as many of the books were out of print - it gave me a sense of triumph when I managed to track one down, but always mingled with baffled anger at the fact that these wonderful stories had been allowed to go out of print.

A few years ago I wrote to Diana, via her publisher, to tell her how much joy her work had given me, how much I loved the variety, and how much certain books had meant me. I was surprised and delighted to get a lovely, warm, personal letter back.

I was encouraged to attend my first Con by reading 'Deep Secret', which left me feeling that a con might be the kind of place I'd fit in (Although I have never, yet, met a centaur at one)

I know we have all known for some time that Diana was very ill, but hearing of her death still came as a shock.

I am so glad that she did get to see her books come back into print, and to see the 'Howl's Moving Castle'. I mourn the fact that she had to endure a horrible illness, that she had to go when she still had new, fresh stories unwritten.
My deepest sympathies are for her family and her friends, and I do hope that they will, now or soon, take some comfort from seeing how much she was loved and valued by so many of us who knew her only through her books.

I shall be re-reading my favorites this week.

Thank you again, Diana. Rest in Peace.
Posted by Marjorie at 1:15 pm 3 comments:

I've not blogged for a bit, being too tired and stressed. But now I have things to say, about Family, and Friends, and Frankenstein and Monsters. But I'm too busy doing stuff to blog. Soon, I promise....

New post up on livejournal, friends-locked for indiscrete grumpiness.

Posted by Marjorie at 8:07 pm No comments:

In Which I Relax

I hadn't made any firm plans for this weekend - for  a time I had been considering whether or not I could make it to Dublin for P-Con, but cost and time and various other upcoming commitments all meant it was not practical, but as the other family-related think I'd been thinking about didn't  pan out, I ended out calling my parents on Wednesday to see whether I would be able to visit them for the weekend.

They confirmed that that would work out, so I drove down to Devon striaght from work on Friday.

I'm lucky in that I've always got on very well with my parents, so I always enjoy seeing them.
Visiting them also has other advantages. 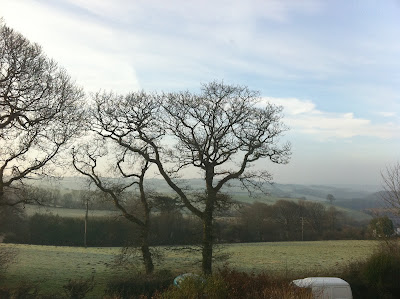 It's nice to arrive to a meal someone else has cooked, for instance, and then there is the part where, provided I stay in bed long enough in the morning, someone will eventually arrive bearing tea...

When I first woke up, and looked out at the view, I saw that there had been a light frost overnight, but by the time we were up and had had breakfasted (my dad makes what is possibly the world's best scrambled eggs...) the sun had burnt off the frost and left a beautiful bright, clear day.
﻿ 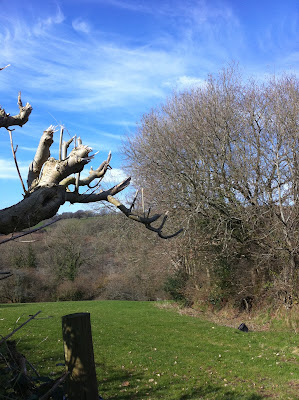 We decided that we would have a 'sunday Lunch' today (as I shall be driving home striaght after lunch tomorrow) and decided to go out for a walk first.
The sun was out, and the sky blue. there was almost complete silence, broken only by birdsong, the sound of running water, and the bleating of new lambs and their mothers﻿. 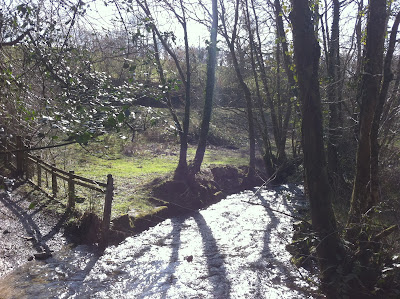 Our walk took us through some woods, down to the stream, and back home through the lanes, where the primroses are starting to flower in the hedgebottoms, alongside the occasional celandine in the more sheltered spots.
It was lovely, very tranquil.
And as we arrived back at the house, it was clear that my father's careful reading of the instructions had bourne fruit, the oven had, as planned, turned itself on, and so we were very shortly able to enjoy our roast chicken dinner...
All in all, a very peaceful, companionable day.﻿
Posted by Marjorie at 6:55 pm 1 comment:

My parents were married on 1st March 1969, which makes today their 42nd Anniversary.

I'm told that it snowed, briefly, that day, and in the photos, they both look amazingly  young. But happy.