A friend of mine, C, is visiting the UK, from the USA, with her daughter, and was staying not far from here, so we arranged to meet up so I could show her around a little.

It didn't start quite as well as I'd hoped, as it turned out that not only was there a road closure on the route to their holiday home, but it seemed that the specific point where it was closed had changed, so none of the diversion signs were correct, which meant that it took me over an hour and a half to do a  40 minute journey...However, when I arrived, and met with C and T, things started to get much better!

Initially, we went to Wells,  where we wandered around the market, and then visited Vicars' Close, and the Cathedral, and briefly visited the Bishop's Palace.

It was a lovely sunny day, so wandering around the city and the cathedral green was enjoyable, and I think C and T enjoyed, it, too.


After lunch, we then drove to Glastonbury (with a brief stop en route to visit the Hot Fuzz swan, which lives at the police station), where we  visited the Abbey. 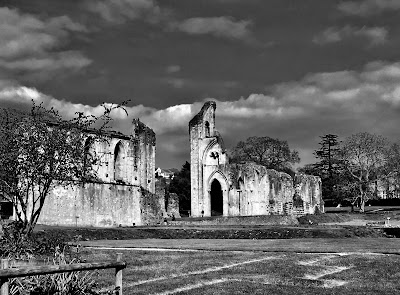 I do enjoy visiting the Abbey - all the ruined grandeur, and the tranquility of the site. 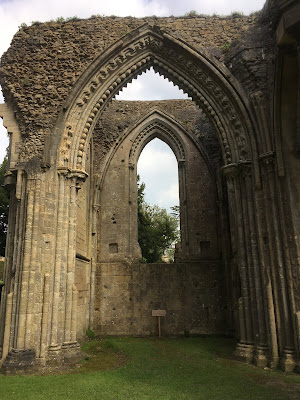 It was a good day, and fun to meet up with friends who I previously only knew online.
Posted by Marjorie at 9:17 pm No comments:

Wonderful food, and A Visit to the National Gallery

I recently had a day in London, and took the opportunity to revisit Mere, Monica Galetti's restaurant, for lunch.

I'd been once before, with my friend A, a little over a year ago, and had been looking for an opportunity to go back!

It was well worth it! They've just changed to their Spring menu, which meant lots of lovely fresh flavours.  I was only there for lunch, and didn't feel I had time for the full tasting menu, but as it turned out, since I was given 2 amuse-bouches as well as the courses I actually ordered. All of which were delicious!


It was all glorious, and, as you can see, beautiful to look at as well! I also got to try sweetbreads for the first time (my verdict is that I like them, or at least I like them if they have been cooked by Monica Galetti.)

Well worth a visit if you are in London, (and while it isn't cheap, they do do a fixed price lunch menu during the week, as well as the tasting menu and a la carte).

After lunch, I went to the theatre (to see Betrayal again), then, as I had time to kill before my train home, I went the National Gallery,  as I am always happy to spend time there.

This time, however, I decided to give those a miss, and to spend some time with some of the other artworks.
I rather enjoyed Rubens' sketch, ' The Lion Hunt', particularly the worried horse batting its eyelashes at us. 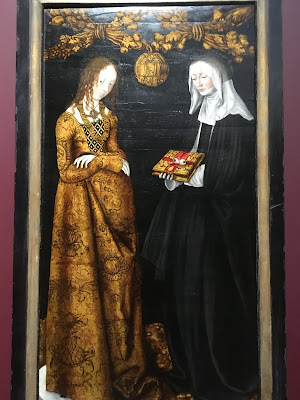 And this study of Saints Christina and Ottilia.

Particularly St. Ottilia, who is carrying a tasteful , if slightly startled, pair of eyeballs. 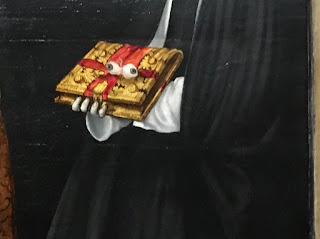 It turns out that St Ottilia wasn't, as you might think, martyred by having her eyes removed but rather was miraculously cured of blindness.(The label by the painting is silent on whether this was before or after she formed the habit of wandering around with her eyeballs balanced on a book..!) 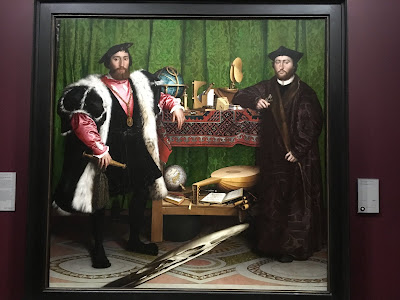 I did also make time to go and visit The Ambassadors , and Whistlejacket.

Then I took a walk back to the station, through Hyde Park, where I spotted some of the resident parakeets ( They apparently descend from a small number of pets which escaped or were released, 3 years ago or so, and now there are literally thousands of them living wild) 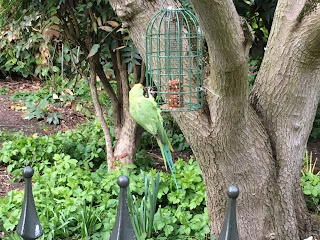 I also saw a pair of jays, which made me happy. I haven't seen one for years, so it was a lovely surprise, even if they were not very cooperative about posing for photos! 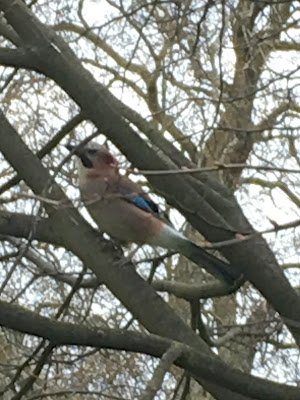