I've been looking forward to seeing Neil Gaiman reading ever since I first saw on his blog http://journal.neilgaiman.com/ that he would be coming to Manchester. I booked a couple of tickets before they even went on sale, booked a couple of days off work and prepared to enjoy myself.
I spent a couple of hours in the morning making hundreds of tiny (gluten-free) cup cakes, and decorating a small proportion of them, which led me to he conclusion that I was not cut out to be an artist, or at least not in the medium of icing… 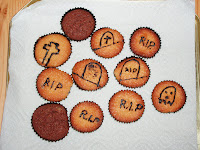 Then drove the 200 miles to Manchester and had a quick meal with the friend I was staying with, before heading over the Whitworth Hall where Neil’s event was being held. Whitworth Hall is the University’s main hall – Victorian Gothic, with a huge pipe-organ behind the stage. Having been an undergraduate at Manchester, the last time I was in the hall was when I was awarded my degree. I would have to say that that was possibly more important, but this was way more fun!

When Neil was introduced, he didn’t go straight in to the reading, instead, he explained that he had been getting e-mails from people about Jonathan Coulton’s gig, I liked his intro so much I have to share it;

“ I have been getting e-mails from people about Paul and Storm and Jonathan Coulton, who are also over from America and also playing in Manchester University this evening saying that they were going to having to make a decision – and obviously, if you’re here tonight you made the right decision. But I’ve found it worrying that in years to come, those of you who like Jonathan Coulton’s work, those of you who would have liked Paul & Storm’s work if you’d known about it at the time, would get bitter and twisted and look back on this event not as the evening of perfect and unalloyed pleasure that we trying to put together for you but as something dark and somehow distressing. So I spoke to Paul and Storm and Jonathan Coulton and they agreed to do the single shortest possible Paul and Storm and Jonathan Coulton gig, here, before we start. So technically, what you are going to get is the only writer who has ever spoken here and had a support band.” 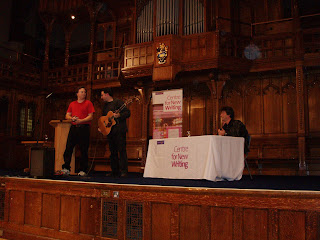 We then got Paul & Storm singing “Live”, and Jonathan Coulton singing “Skullcrusher Mountain” (And JoCo promptly christened the event ‘Gaimanbury’!) 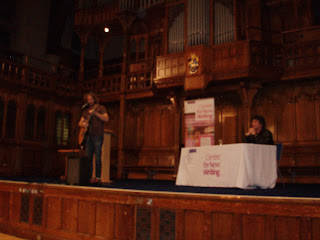 Neil then did a reading of the first part of Chapter 3 of ‘The Graveyard Book” before doing a Q&A – some about the Graveyard Book and how it came to be written, and others about meeting Steve Ditko (complete with Neil’s excellent Jonathan Ross impression), Sandman (and how proud he is to have written the world’s first sexually transmitted comic) and about what section of the bookshop Neil Gaiman books ought to be stocked – Neil’s suggestion was that there should simply be a ‘Neil Gaiman’ section…. Neil also gave a few hints about his trip to China and what that might turn into.

Neil then did a signing – this was in the lobby to the hall, and getting there was a little chaotic as the lines for signing, for buying books and for getting out got a little tangled! Having been sitting at the front of the hall for the reading I ended up near the back of the signing line, which was OK in that I had some fun conversations with nice people in the line (you can get to know people pretty well in 2 ½ hours of queuing), but was a bit cold and wearing on the knees.

This was the point at which my mini-cupcakes came into their own – I think most of those in the last 1/3 or so of the queue got one, and they seemed to be appreciated. I had previously separated 4 or 5 in a box to hand to Neil, hence the gluten-free-ness, but don’t know whether he actually ate them – by the time we got to the front of the queue it was about 10.20 p.m. and I think he was desperately trying to finish signin 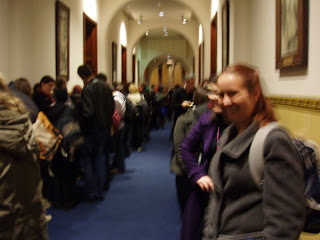 g! Despite having been going for so long, he was (as he always seems to be) very friendly and was personalising and adding gravestones to the books. Having a 3-way conversation with Neil and with girl-who-I-met in the queue, about which of Neil’s books would be suitable for someone who didn’t like the sex in American Gods, and about the difference between the ‘adult’ American ‘Graveyard Book’ and the ‘children’s’ UK version, I completely forgot to say I was a Fiend. I blame fan-girl excitement plus queuing fatigue!
I had been planning to try to catch the end of Jonathan Coulton after the signing but it seemed too late (Plus I had agreed to give a lift home to the girl in the queue, so she didn’t have to wait for an hour on a freezing cold station) I 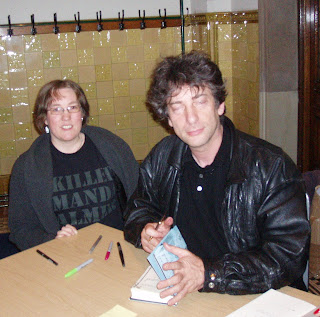 now know that this means I missed the opportunity to see Neil with a tambourine . . No good deed goes unpunished.

Got a few hours sleep at a friend's house then drove the 200 miles home again, so am now completely knackered, but it was well worth it!

I obviously have some way to go on the whole successful pictures front, however . . .
Posted by Marjorie at 5:53 pm 5 comments: