The first National Lockdown here in England  was announced on 23rd March, 2020 and became mandatory on 26th, so we're now a year on, and we're still locked down, although there have been periods when it's been eased.

In the Before Times, this blog was mostly about the exhibitions and plays I was seeing, so material has been rather thin on the ground in the past twelve months.

I have seen some productions - via the wonders of the internet and TV: I've enjoyed the 'Culture in Quarantine' on the BBC, which included releases of several RSC productions such as the Christopher Eccleston / Niamh Cusack Macbeth, and the various NTLive shows which were streamed free (I particularly enjoyed being able to re-watch the Tom Hiddleston Coriolanus and the Mark Gatiss Madness of George III)  and have also seen a number of new, online productions - Michael Sheen in the Old Vic In Camera Faith Healer, and What A Carve Up  and, more recently Romeo & Juliet  (Which uses green screen filming to make it appear that actors are on stage together when they aren't) and the RSC's Dream  which uses motion capture and CGI, coupled with extracts 'A Midsummer Night's Dream' to present a vison of how the fairies might appear.

There have, too, been lots of other events - online lectures and interviews with writers, actors and academics which to some extent replace the events I might otherwise have attended in person. And some of which I wouldn't have been able to see in person, as they were too far away.

But I do miss live events.

There are, of course , some advantages.  I was able to watch 'Faith Healer' in my pyjamas, with a large glass of wine in one hand and a kitten on my lap, which isn't normally practical in the theatre, and there's none of the irritation caused by people who won't stop talking, or who let their pones ring during performances, but on the whole,I'd rather live with those things, and be able to see performances live. I do hope, however, that as things return to normal we we keep some of these positives - so productions can be seen time and again, and are available to people who can't, for whatever reason, get to the theatre. 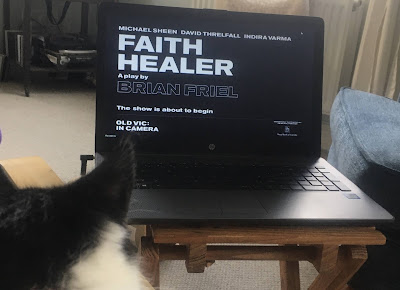 I've missed eating out,too. Particularly the social element. I've tried various options - one of the pubs in the village, which normally offers fine dining, has reinvented itself to offer a fruit & veg shop (expanding to include fresh meat and fish, fresh bread, essentials such a loo roll and, in the early days of empty supermarket shelves, flour (decanted into brown paper bags from their huge 25kg sacks and to offer take away food such as fish and chips, pizzas and excellent burgers and fried chicken. I've also tried food from national delivery options - Lebanese street food from Borough Market, and a glorious (if expensive) meal from Mere to heat and plate at home 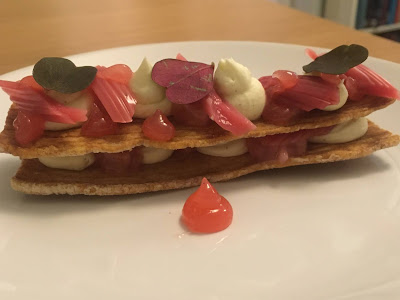 I have also been, on the whole, enjoying taking my #Permitted Exercise. I had, about a year before all this started, made a decision to try to get fitter and perhaps to lose some weight, so I had already been working (mainly successfully) on getting in at least 10,000 steps a day, but this was mostly through taking (repetitive) walks around the town during my lunch hour in the week, and aiming to do more on foot and make less use of public transport when out and about at weekends, while I had done some walks from home, most had been a bit further afield. 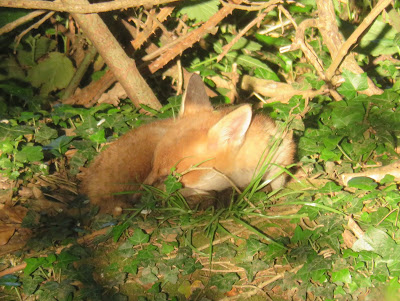 One positive of being locked down has been getting to know that area immediately around my house much  better,  from watching the gradual seasonal changes, to learning where and when to see wildlife, from foxes, to deer, to badgers. 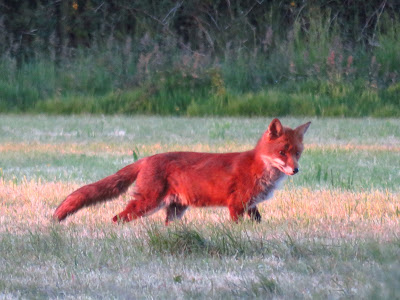 I see myself as being very lucky to live here, in the country, where I have this, literally on my doorstep, rather than being in a town 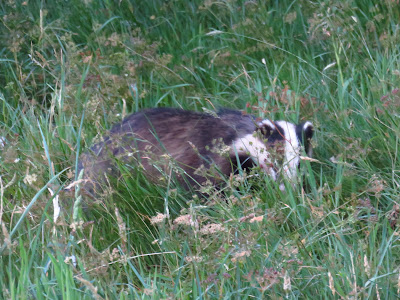 I have been very fortunate that my close family have all stayed well. although I have friends who have not been so lucky, and of course there is the constant anxiety, for myself and others.

Posted by Marjorie at 5:02 pm No comments: