Leonardo 500 in Bristol (and some other art) 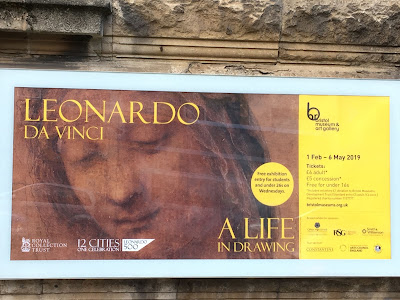 It's 500 years since Leonard da Vinci died, and as part of recognising that and celebrating his life and genius, the Queen's collection is lending some of her collection of his drawings to 12 museums or galleries around the UK, one of which is the Bristol Museum and Art Gallery,which has been loaned 12 of the pictures, and on Sunday, on a whim, I went to see it .

It is a small exhibit (12 pictures! ) but well worth seeing. You were not allowed to take pictures in the exhibition, but there are photos on the Royal Collection's website (here)

After seeing the Leonardos, I looked around the rest of the museum, which has a small section of ancient Egyptian artefacts, including a child's tunic, which is around 1,500 years old! 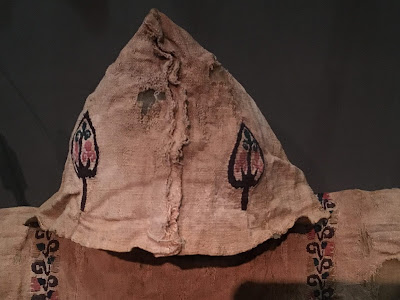 
There is an aeroplane hanging in the main hall - it's a replica of a Bristol Boxkite, which were built in in Biostol between 1910 and 1914 . The replica was one of several built for the making of the film ' Those Magnificent Men in Their Flying Machines'  , in 1965. 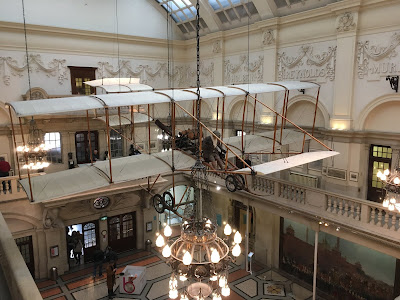 The museum also includes a small but well stocked art gallery, with a Gainsborough, Stubbs,a BurneJones, Alma-Tadema and a Damien Hurst.

I enjoyed my visit.
Posted by Marjorie at 7:43 pm No comments:

'Betrayal' at the Pinter

The Harold Pinter Theatre in London has been doing a season of all of Pinter's short plays. I went, in October, to the first production, 'Pinter 1', and last weekend I went, with friends, to the final production, a performance of 'Betrayal', Pinter's semi-autobiographical play, based on his affair with Joan Bakewell. 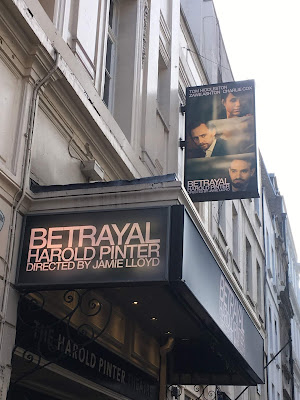 This production has a small, but very impressive cast  Tom Hiddleston as 'Robert' , Zawe Ashton as 'Emma', Robert's wife, and Charlie Cox as 'Jerry', Robert's best friend, and Emma's lover.

There is a beautifully minimalist set  -a slightly marbled effect backdrop which changes  with lighting between subtle pinks, greys  and blues in different scenes , and then just a couple of chairs, and at times a folding table. The stage has a revolve, which is used sparingly, and effectively!

It's very good. The minimalism of the set means that the focus is really on the characters, and their relationships, and the actors portray these extremely well. The betrayals are, of course, not  just the obvious ones of Emma's adultery, but also Robert's betrayal of her, through his own adultery (which we learn of at the start of the play, and Emma, due to the reverse chronology, learns of  after the end of her affair with Jerry) , Emma's betrayal of Jerry, in lying to her about what, and when, Robert knows of their relationship, and the ways in which Robert and Jerry betray their friendships with one another.

There are moments of comedy - Jerry's panic as he tries, in speaking with Robert, to remember what he is supposed to know, and what he only knows from Emma's clandestine letters, about Robert and Emma's trip to Venice, and Robert stabs viciously at his melon, and knowingly, and maliciously comments to watch Jerry squirm, however, in the same scene, Hiddleston manages to portray Roberts grief and loss, as he appears close to tears.

All of the characters are on stage all of the time, so their presence is felt in every interaction between the other two  - every time Jerry and Emma are together, Robert is in the background, not present in body, but there in their, and our, consciousness.

In short, i was impressed. It's well worth seeing, and I'd have to admit that while it does nothing to change my view that Pinter probably wasn't a very nice person, I have to admit he was a pretty good playwright!

And Tom Hiddleston is undoubtedly an excellent actor . Both Zawe Ashton and Charlie Cox are also excellent in this, but I  think of the three characters, Robert is central, and so Hiddleston's role is central.

The play is on until 1st June, and tickets are still available (although mostly, not cheap). If you have a chance, it is well worth seeing.
Posted by Marjorie at 8:30 pm 3 comments:

When we arranged to see Mother Courage , my friend suggested that we also push the boat out and go to Mana a new, fine-dining restaurant in Ancoats, where the food is a work of art for the eye as well as the taste buds!


There's no menu. There is a 14 course menu, and that is what you get, although when you book they ask about any allergies or dislikes, so you don' get served anything you hate.

And then you sit back and enjoy.
Each dish is brought to you not by the waiting staff, but by the chef or chefs who made it, who explain what it is.
Some courses were merely tasty, others were sublime. One or two were mildly disappointing  - there was  a carrot dish with gooseberry and chili, where the chili  overwhelmed everything else, for instance.
But most of it was amazing. There was a Yakitori style smoked eel dish, which was cooked over hot coals in the kitchen, and came with a roasted yeast marinade, and was the stuff of dreams.

I particularly liked the barbecued brassicas with dehydrated scallops and beeswax. I don't know what dark magic they used, but they somehow took cabbage (and other brassica) leaves, and made them taste as though they were cooked with beef, or some other proper barbecued meat!
As the meal drew to a close, we were given Sheep's Milk (a little yogurty quenelle, plus some meringue-like discs of milk, still delightfully sharp and fresh tasting) with apple and sorrell ice  - it was delicious and very refreshing.


The second dessert was reindeer moss, from the isle of Skye, sprayed with dark chocolate and served with a whisky egg-nog dipping sauce. It makes for what may be the worlds most high-class cornflake cake, and did make me suspect that reindeer moss may not taste of much by itself, but offer it to me sprayed with chocolate and served with egg nog and I'll take it any time!

It's not cheap, but it is a very pleasant way to spend an evening, and as the menu changes with the seasons, it's very tempting to go back again.

The head chef, Simon Martin, was formerly a chef at Noma.

If you are in  or near Manchester, I'd heartily recommend it. I think they do a shorter set menu at lunch time, too. I want to go back

Posted by Marjorie at 8:40 pm No comments:

This is the second Richard II I've seen this year, the first being at the Almeida in January.This one was at the Sam Wanamaker Playhouse,  (the Globe's Jacobean theatre),  and the cast, led by Adjoa Andoh (who also co-directed) was made up entirely of women of colour.

We were sitting in the front row, right round to one side, so at the side of the stage, which was interesting, although it did mean that a lot of the time the  actors were  facing away from us.

The production sets the play in a non-specific, other England - the back of the stage has been covered with bamboo, and the cast were all dressed in styles from a range of different countries and traditions, and  photos of female ancestors of the various cast members were displayed around the theatre.  Richard's crown was made of black and gold feathers, and she carried a  horsetail fly-whisk by way of a sceptre. 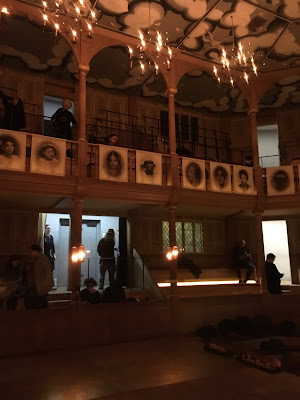 There were some really powerful performances - Andoh's Richard was perfectly petulant, too sure of her own god-given right to rule, and Shobna Gulati's Duke of York was a joy to watch, and listen to, as her loyalties gradually shifted.

Over all, an excellent and thought-provoking production, one to catch if you can. It's on until 21st April   I have to admit, I enjoyed it much more than the Almeida version (despite Simon Russell Beale,)
Posted by Marjorie at 9:32 pm No comments:

My friend suggested that we go to see Mother Courage and her children' at the Royal Exchange Theatre in Manchester, starring Julie Hesmondhalgh.

It's not a play which I had previously seen, or was familiar with, but I'd enjoyed the previous Brecht productions I've seen, so why not?

It turns out that this is more unremittingly grim than either of the others I've seen, lots of death, betrayal,  (off-stage) rape, and murder.

The play was originally set in the 30 Years War, this version is set in a dystopian future, in which Europe has become a war-torn range of 'grids', rather then countries, across which the Red and Blue factions fight for resources, and Mother Courage crosses between them, selling drink, drugs, weapons, luxuries and sex (her own or that of others) 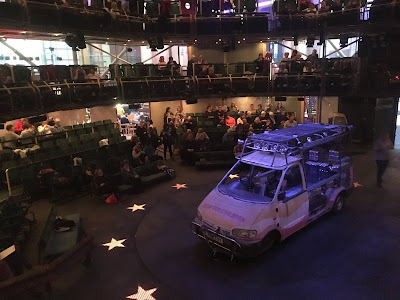 She is a deeply flawed, and deeply unlikable character, whose hunger for profit contributes to the deaths of her children, and who is, in turn, betrayed or let down by most of her companions

It was an interesting production, with excellent actors, but not a barrel of laughs!
Posted by Marjorie at 2:58 pm 1 comment: 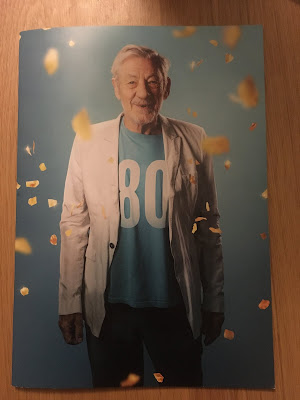 Sir Ian McKellen turns 80 this year, and to celebrate,he is doing a  one-man show, touring to 80 theatres. up and down the country. The first outside London was Bristol Old Vic.  So naturally I booked tickets, and on Tuesday night my friend A and I went to see him.  And, er, then on Wednesday night I went again....

The show opens with music from LoTR,  with McKellen reading  from The Fellowship of the Ring,  the scene with Gandalf and the Blarog, after which he pulls out Glamdring and invites a young member of the audience to inspect and wiled it..

The rest of the first half of the evening involves a roughly chronological whistle-stop tour of Sir Ian's life, talking about his early experience the  theatre, at school and university, his decision to become an actor and early experience, and about coming out ( motivated, in part, at his anger about Section 28), being knighted, (and  having his name mispronounced)


Then the second half was all Shakespeare... audience participation to name all of the plays, with anecdotes and excerpts from a chosen selection, meaning we got to hear The Seven Ages of Man, Fear no more the heat of the sun, from Cymbeline, Justice Shallow's reminiscences from Henry VI, the Rogue and Peasant Slave speech from Hamlet, the balcony seat from Romeo & Juliet, several bits from McBeth,  Aufidius's welcome to Coriolanus, - one evening we had Once More Unto the Breach! from Henry V, and the other, the Hollow Crown speech from Richard II, and both evenings finishing with the Our revels now are ended from The Tempest.

And afterwards, he came out to the foyer to collect money for charity (Each theatre gets to chose which charities get the profits from the evening, and from McKellen's bucket-shaking - at Bristol, it was to be for a theatre group for people with disabilities , and for a fund which supports  students from the Old Vic theatre school in gaining professional experience.


I would up tired, after two mid-week nights out, but I regret nothing (well, maybe the fact that we were up in the gods for the first performance, where the seating, while way less uncomfortable than the narrow bench seats I remember from when I saw my first Hamlet there, back in 1991, was still rather cramped!)

I think the rest of the tour is mostly sold out, but he has been adding some extra dates, so if you get a chance to go, take it!  https://www.ianonstage.co.uk/
Posted by Marjorie at 8:52 pm No comments: