In which I am, once more, outwitted by my car...

As those who know me will know, I am not mechanically gifted. I can drive my car. I can put petrol and oil and water and air into the correct parts of it, I can (and, perhaps more importantly, I do) check the tyre pressure, and since the whole issue with blowing up the engine that one time, I check the oil, too. I have even, on one occasion and on principal, changed a wheel.

However, that’s the limit. And (confession time) I don’t actually understand it. I believe that at some point the petrol explodes, which when you stop to think about it does not seem a terribly safe or sensible way to get around, but most of the time, it works, and I don’t question it. (It’s like plane travel – it’s important not to start wondering how it works while you’re in flight, in case it notices you doing and stops working)

So, when I was driving to work and an exciting orange light came on on the dashboard, I didn’t hesitate. No. I panicked. Then I pulled over to investigate. The light said ‘ABS’, which, to my powerful intellect suggested that (a) My car has ABS and (b) something was wrong with ABS. The manual helpfully suggested calling my garage (which I would, of course, NEVER have thought of on my own) Slightly more helpfully, it referred to ‘limp home mode’, which implies that one can drive it as far as the garage at least, without blowing up the engine, which, as I learned the hard way, is not true every time you try to drive to the garage with a light on on the dashboard. . . .

So, I drove, cautiously, the rest of the way to work, waited until the garage opened and gave them a ring. They know me, and my car. They service it regularly, repair it when it gets broken, and forbore from laughing at me and rebuilt the engine after the regrettable incident with the last light…

So, the plan was that I would take my car over to the garage, they would give me another one in exchange for the day, fix mine, and everything would be OK.

That was the plan.

When I got to the garage, my little car was hooked up to a diagnostic thingy.
It turns out that the ABS includes sensors. These, I am led to believe, allow the car to know if it is falling over, and to slow it down if it is. (Good to know, as if I’m going to fall over in my car, I want to be sure I do it slowly.)

Replacing the sensors apparently takes about an hour , and there was a queue, which of course is not a problem if you’re having a courtesy car.

Which was the plan.

The plan, sadly, did not take account of the fact that the previous driver of the courtesy car, due to return it ½ an hour before I arrived, had driven it into a ditch.

So I had to go away, still driving cautiously. On the way home, we had fun, with the car deciding at perilous moments (Such as while driving slowly along a flat, straight bit of road, for instance!) that we were falling over and therefore it should put the brakes on.. This makes for interesting driving.

Happily, I was able to take the car back the following day, I got to borrow a shiny pink Smart car for the day and now I have new sensors, and a car which no longer thinks that it is falling over.

Of course, there are also at least 6 other lights on the dashboard which have not had their day in the limelight yet . . .
Posted by Marjorie at 9:56 pm 8 comments:

I only heard, quite recently, that PTerry was going to be in Bath – He was there for a recording of the Radio 4 programme With Great Pleasure to be broadcast on Christmas Day.

The tickets were free, but as the BBC want a full audience they send out more tickets than the number for seats, so, knowing how popular Terry is, I decided to get there early. Unusually, I managed to leave work promptly at 5, and so arrived outside the venue The Forum (Which started life as a 1930’s Art Deco cinema, is now an evangelical church) at about ¼ to 6, by which time there were already around 150 people queuing, so, pausing only to pick up some coffee and fries from the Evil Empire Junk Food Emporium across the road, I joined them.

45 minutes and some interesting conversation later (by which time the queue stretched back around 3 sides of the building, although as the auditorium seats around 1500 I don’t think there was anyone who didn’t get in. I ended up sitting about 4 rows back from the stage, which was good.

The format of the programme is that the subject picks poems or passages from books which they enjoy, or which have been important to them – a bit like ‘Desert Island Discs’, but with literature instead of music. The chosen passages are introduced by the subject – Terry, in this case, and read/performed by actors. (Unfortunately, as I have a poor memory for names, I can only remember that one of them was Helen Atkinson-Wood –I can’t remember the other two)

As this was a recording for a radio programme, it started with the producer (A very pleasant lady who reminded me of the nicer kind of school teacher) came out to explain what would happen, to remind us to turn of all mobile phones, (both because of the recording, and also, as she pointed out, because if your phone goes off everyone will look at you and you’ll feel like a pillock!) and also that we were asked not to leave immediately at the end in case any re-takes were needed. After a moment to practice “Rapturous Applause”, Terry and the actors came on.

After a brief pause caused by Terry having left his script backstage, in all the excitement, and some genuinely rapturous applause caused by, y’know, rapturous PTerry fans, we were off.

Terry introduced each piece – we started off with a reading from “The Specialist” by Charles Sale (the titular character being a specialist in building privies..) and ended up with Charles Darwin, going via the Bible, The Hitchhikers Guide to the Galaxy, Sir George Caley and Roy Lewis and many others. Terry had lots of lovely little stories – for instance, in introducing the reading from Michael Ayrton’s The Maze Maker (A book I had never previously heard of, which is a novel written as an autobiography of Daedalus) Terry talked about being a ‘one-time bee-keeper’, and having been inspired by the book to take silver-smithing classes and make a honeycomb and bees..

There was a wonderful reading about the Victorian Post Office, which Terry came across in researching for Going Postal - sadly I didn’t catch the title, so have not been able to track this one down.


We also learned that Leonardo da Vinci, while being (Terry granted) “a dab hand with a paintbrush” was (and I quote) “Pants” when it comes to Aircraft…

Terry had picked one reading from the Bible (Job), but made it clear he is not a believer (or as he put it, “I think the only thing likely to strike me on the Damascene road would be friendly fire..)

Terry also talked about his love of poisons, and the unfortunate Victorian ladies dying of arsenical poisoning as a result of the dye in their ballgowns.

After the main part of the programme ended there were a very small number of re-takes (from which it became clear that Terry was speaking from notes, not a formal script, as it was slightly different each time. 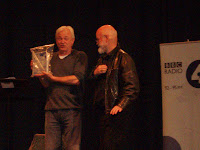 After this, as it was BBC Children in Need night, Terry had donated a signed, limited edition copy of
Nation which was auctioned for the charity, raising £750.

Terry then waited to sign anything anyone wanted signing, which was an unexpected bonus, so far as I was concerned. I hadn’t brought any of his books with me as I had not expected him to be signing, but I did wait to get my ticket signed, mainly for the opportunity to say hello, and tell him how much I had enjoyed the evening. 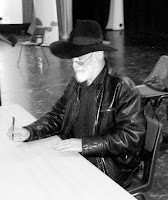 The entire recording lasted for just under two hours. Given that the programme usually lasts for 30 minutes, and I would imagine that even if this one, being the Christmas special, is longer, it will be edited fairly severely, so I guess some of the readings won’t make it to the final cut.

My evening ended with another couple of queues, this time for the payment machines, and then the exit, to the carpark. Chatting to some of my fellow queue-ers we agreed that this was a less exciting queue that the earlier one!

The readings (as far as I can remember them) were extracts from: