Sorry for the delay

Oops. There's been another gap, hasn't there? Sorry.

I just haven't been doing anything terribly exciting for the past 10 days.

Having watched 'Richard II', I also watched, and thoroughly enjoyed, Henry IV parts 1 and 2, and Henry V. I haven't been particularly aware of Tom Hiddleston before. I have to say, that as well as looking good in a codpiece and on a white charger, he is also a damn good actor.

In Which There Are Hens

I may have mentioned one or twice that my sister is getting married soon - and this weekend just got was her hen party. Since getting while wearing L-Plates and a veil isn't really K's style, we went for the more sedate and civilised option, of going to a hotel with it's own spa for the weekend. Which was nice.

As well as several of K's friends, both my Mum and K's future mother-in-law came, as did one of C's sisters and her daughter,so it was an opportunity to get to know them better, too.

After doing the spa day, we did tease K a little over dinner - my sister E had set C a quiz, and K had to guess what answers he'd given (we judged that she got enough right to be able to go ahead and marry him!).We also brought various little bits and pieces to talk about how we knew her.. which was also fun - one friend, who went travelling with K, brought a world map with stories about some of the more interesting events of their travels, the friends who work with her had prepared a story, with visual aids, in the style of the ones they make for the (special needs) children they work with, about her wedding, and so on. 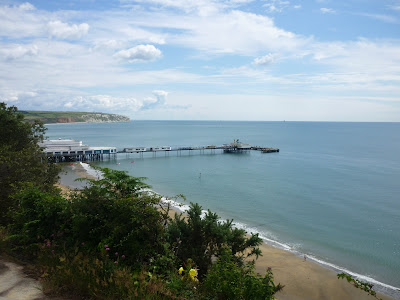 On Sunday morning, those of us who didn't need to rush off too quickly went for a short walk in Shanklin, making the most of the weekend's brief sunshine, then K, E and I, with my mum, had a very good pub lunch before heading home.

It was a nice weekend, and I think K enjoyed herself, which is the main thing. And now it's only a month to the wedding!
Posted by Marjorie at 6:39 pm No comments:

The School for Scandal

'The School for Scandal' was first performed in 1777, and I have to say that some parts of it have worn rather better than others. Last night's prodution was well done, but not entirely to my personal taste.
The play is not subtle. We open with Lady Sneerwell and her accomplice, Mr Snake, who carefully explain to each other their nefarious plot. All of the characters have names which clearly telegraph their defining  (when you have a character named 'Sir Benjamin Backbite' or 'Lady Sneerwell'  None of the actors could be accused of under-acting, or allowing any undue subtlty to creep into the performance. Of course, this is very much down to the text itself, and once you adjust to an almost pantomimic level of ham the play is quite entertaining.

I enjoyed the performances of Edward Bennett and Nigel Harman, as Joseph and Charles Surface, respectively - and of Susannah Fielding as the spendthrift and pleasure-seeking Lady Teazle - in fact, the majority of the actors were excellent - but I got a little bored with the text. Which is, I suppose, Sheridan's fault, and not that of the company!
Posted by Marjorie at 5:32 pm No comments:

As part of the cultural olympiad, The BBC has a whole tranche of Shakespeare related programmes (their 'Shakespeare Unlocked season) as part of which it is showing new productions of 4 of Shakespeare's history plays - Richard II, Henry IV Parts 1 and 2, and Henry V.
The first, Richard II, was shown on Saturday night, and was breathtaking! Richard was played by Ben Wishaw, as a young, indecisive, mercurial and often petulant king, making the estrangement of so many of his court believable.
By contrast, Rory Kinnear's Bolingbroke was a taciturn, pragmatic soldier, who also managed to convey a level of slightly affectionate exasperation at Richard, which reminded me that they were related; there was a trace of 'older sibling' in there..

I am very much looking forward to seeing the other plays in the cycle, and while I do want to Jeremy Irons as Henry IV, I am a little disappointed that Rory Kinnear won't be playing the role (although I suppose he'd be a little young for it) And seeing Henry V will be interested, especially so soon after seeing it on stage - I always enjoy comparing different productions.

If you get the opportunity, do watch.
Posted by Marjorie at 8:50 pm No comments: