When I saw that Andrew Scott (Moriarty from 'Sherlock') was going to be playing 'Hamlet' at the Almeida Theatre, this Spring, with Juliet Stevenson as Gertrude, I couldn't not try to get tickets. I didn't manage it directly, but my friend A did, which meant that last night he and I fortified ourselves with an excellent Turkish meal before heading to the Almeida. 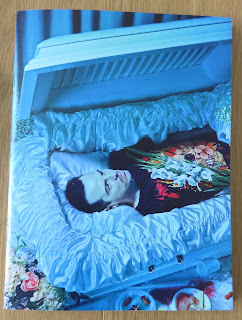 This production of the play is almost uncut, and is directed by Robert Icke, who was also responsible for the horribly effective and chilling 1984.

It was very interesting, and very different from the last couple of versions I have seen. This iteration of the court of Denmark is modern, the stage divided by sliding glass doors allowing to see behind the arras at times, the opening scene sees Horatio and Marcellus spot the ghost on the bank of screens showing feeds from security cameras, and updates such as Fortinbras's invasion are shown as news reports (complete with Danish headlines running across the bottom of the screen).

Andrew Scott's Hamlet is not, for the most part, as maniacal as you might expect, from seeing his Moriarty - from the outset, he came across as anxious and uncertain, constantly fidgeting with his watch, and lacking in self-confidence. His soliloquies are often conversational, and this is definitely a Hamlet in which the madness seems genuine rather than feigned.
Gertrude (Juliet Stevenson) and Claudius (Angus Wright) are passionate with one another, unable to keep their hands off each other, but I wasn't entirely convinced by Claudius-as-villain , except in the final poisoning scene.

I was left feeling a bit ambivalent about the production. I would quite like to see it a second time. But I found it interesting, and worth seeing.

Hamlet is at the Almeida until 15th April.

Posted by Marjorie at 7:23 pm No comments:

A Different Kind of Marmalade

The season for Seville Oranges is over now (it is very short), although I have enough in the freezer for one more batch of marmalade, but it occurred to me a couple of weeks ago that it might be interesting to give it a go with blood oranges, as they're so pretty! 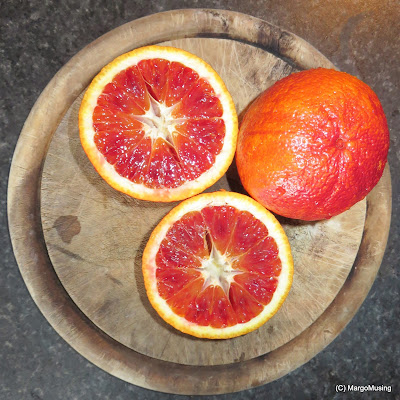 It's not as easy as you might think to track down blood oranges, but I managed, it, and spent an afternoon juicing and chopping and boiling. 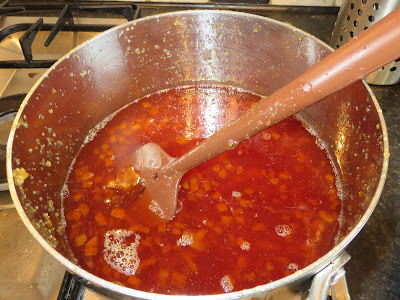 I ended up with 6 and a half jars.

It's pretty, although not quite as pink as I had hoped, based on the juice.It's also much sweeter than the ordinary Seville kind, so I shall probably use it for baking, or to offer to guests, as I like my marmalade  pretty tart.

I also bought some pin grapefruit and am planning to make a small batch using those, too, to see how that turns out.
Posted by Marjorie at 4:51 pm 3 comments:

On Friday evening I saw 'Abigail's Party' at Bath Theatre Royal. It's one f those plays which I am aware of, but have never seen before, and I wanted to see it partly for that reason, and partly as I was interested to see Amanda Abbington (Mary Morstan from Sherlock) on stage. 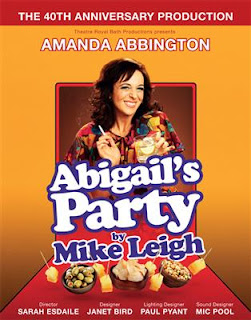 It was very good, although it is the kind of play which you watch with a degree of horrified fascination, as Beverley (Abbington) and her Estate Agent husband, Laurence (Ben Caplan) throw a cocktail party at their suburban home for their new neighbours Angela (Charlotte Mills) and Tony (Ciarán Owens), and older, divorced, neighbour, Susan (Rose Keegan) who is there to allow her 15 year old daughter to hold the titular party, free from parental interference.

Beverley is the awful, pushy, hostess, constantly overriding her guests' preferences and wishes, to score points off them and her husband, flirting increasingly desperately with Tony, all the while exposing her own insecurities and lack of taste. Her husband, Laurence, clearly prides himself on his more cultured tastes (he has a matching set of Dickens, and another of Shakespeare, but has read neither, and has prints of Van Gogh and Lowry on the walls,  but is put off when Susan appears to be more familiar with them than he is.

The whole thing is full of attempts to 'keep up with the Jones's', and is horribly true.  It's fun to watch as Angela starts subtly to assert herself, and of course for someone my age, brought up in the 70s, there is also the slightly worrying game of seeing how many pieces of furniture on set / props you can recognise from the homes you visited as a child...

The play is in Bath until next weekend, then on tour until the end of April. The performance I saw was only the 3rd one, and this showed a little, Abbington stumbled on a couple of her lines, but over all, it was fun - funny and very watchable.
Posted by Marjorie at 4:22 pm No comments:

Hair Cut and shopping - it's not all theatre reviews, after all.

I have been intending to get my hair cut for a while, and finally got around to it last weekend.

In fact, I'd left it so long that the hairdressers sent me a "We missed you. Come and get your hair cut and we'll give you money off" text message, so that was handy! Procrastination for the win!

Although since it meant I had to go into Bath, I also (naturally) ended up going into the lovely Mr B's Emporium, and, (equally naturally) having gone in for one book, came out with 5!

Also did a bit of clothes shopping - my favourite jeans have died, and happily I found a pair which fit (although they were only available in dark blue, which is a pity. I'd have preferred grey or pale blue, not least because pulled threads from cat-claws don't show as badly on light coloured jeans as dark ones!

And also found a shirt I like, and bought gifts for my sisters, both of whom have their birthdays this month. So I felt that the morning was well-spent. And given that I don't like shopping* and don't enjoy getting my hair cut, it was also fairly stress free. 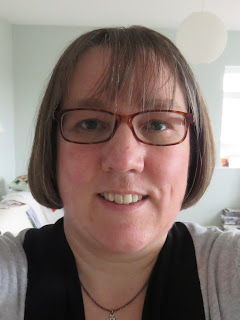 And then obviously I spent most of the afternoon reading, because you need to relax after that of day.
Posted by Marjorie at 11:18 am 2 comments:

Cheek by Jowl's 'The Winter's Tale'

Last January, I saw Kenneth Branagh's production of 'A Winter's Tale', featuring Dame Judi Dench and Hadley Fraser, as well as Branagh himself. This week, I saw a very different production of the same play, by the 'Cheek by Jowl company'.

It was interesting - a very different production, with an understated set, and a lot of cuts. particularly in the second half of the play. 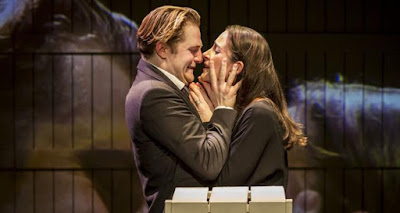 In this production, Leontes (Orlando James) is clearly, from the beginning, unhinged - as his jealousy of his wife, Hermione (Natalie Redmall-Quirke) and friend, Polixenes (Sam Woolf) spill over, he poses them like mannequins, in the image of his fevered imaginings,  and swings between affection and violence in his treatment of his son, too.

In the later parts of the play, once Perdita (Eleanor McLoughlin)  is grown up, the production seems to start to have a little more fun, and to approach the text more irreverently. The shearing celebration becomes a mini-festival, and when Mopsa and Dorcas fall out over which of them the Shepherd's son has promised gifts to, the scene was presented like a Jeremy Kyle show, with Autolycus (Ryan Donaldson) .

I found myself a little disappointed by the way that Paulina's (Joy Richardson)  character was portrayed - rather than her being a courageous,and tragic figure, she came over as more as a scold, which was a shame. (I am pretty sure this was a directorial decision, not down to the actor - she doubled as Mopsa and was excellent in that role).

Over all, I enjoyed the production, but I think it was uneven, and that the first scenes of Leontes' obsessive delusions, and the comedy in the second half, were the strongest parts.

The production is currently touring (dates and locations on Cheek by Jowl's site)
Posted by Marjorie at 7:12 pm No comments: