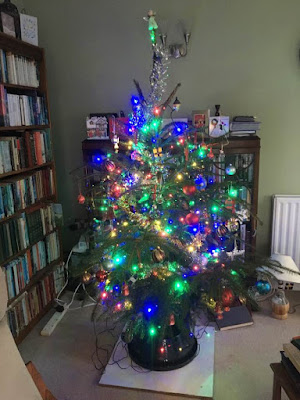 May your day be whatever you would like it to be.
Posted by Marjorie at 3:09 pm No comments:

So, a little while back I applied, on the BBC's website, for tickets to go to the recording of With Great Pleasure at Christmas, for Radio 4, recorded on Saturday,  to be broadcast on Christmas Day. Tickets are allocated by random draw, and just over 2 weeks before the recording, I got an email to say I'd been successful and got tickets.

The recording was in the evening after I was due to see Antony and Cleopatra, so I arranged  to meet up for a meal with my friend A, and then to go to the recording. Which we did. (although we had an anxious wait as they send out more tickets than spaces, and we were among the last to arrive, so were holders of yellow 'wait' stickers instead of white 'definite seats' ones..) But all was well, we got in, and the evening was a lot of fun.

The format of the programme is to invite a guest presenter to share some of their favourite pieces of writing. 10 years ago I got to go to a recording of the Christmas episode, where the guest was Terry Pratchett. This time, the guest was Neil Gaiman..

Neil had picked various poems and extracts from books, which were read by (and in one case acted by) his friends - Mitch Benn, John Finnemore, Nina Sosanya, and the Angel Islington himself, Peter Capaldi .Oh, and 4 members of the ukulele orchestra of Great Britain!

The evening opened with some festive music from the ukulele orchestra, then we heard lots of readings. (skip this part if you want the programme to be a surprise...)
-
-
-
-
-
-
-
-

The readings included some horrifying children's stories (Lucy Clifford's 'The New Mother', and Charles Dickens' 'Captain Murderer)', extracts from Mary Poppins and 'Wind in the Willows', a Saki short story, several poems, including  Henry Treece's 'The Magic Wood' and Nicholas Moore's 'The Island and the Cattle', and Wendy Cope's 'Differences of Opinion (amid some chat and jokes, and Neil's demonstration of the 'I was wrong' dance he and Amanda have for diffusing any disagreements).

We heard an extract of the original BBC  radio HHGTTG recording, and a poem by Terry Pratchett, and Neil read and extract from his own Norse Gods. There was a bit of Brahms and Simons' 'No Bed for Bacon' (about paying writers)

It's difficult to pick, but I think my favourite part was perhaps the performance of A.A. Milne's 'The Fair Lady Dorothy', in which the stage directions / footnotes were read by John Finnemore, and Peter Capaldi played the dastardly (and somewhat obtuse) lover.

Neil introduced each of the pieces,   mostly with a brief explanation of why he chose it, or a joke or comment. And of course we got to see and hear the other performers, including Peter Capaldi's amazing, evil, grin!

At the end of the recording, there were a few brief re-takes, and then it was all over. I think one of the things which made it special was that everyone seemed to be enjoying themselves, performers as well as the audience!

Walking back to the tube station, there were slightly fewer people around on Oxford Street, so I was able to stop and enjoy the Christmas lights, which made a nice end to the evening! .

The programme is to be broadcast on Radio 4 Christmas Day, at 7 a.m. and repeated (or just possibly, a slightly different variation of content) at 10 p.m.  Full details here, and for those overseas or unable to listen live, it will be available on BBC Sounds afterwards. Listen and enjoy!
Posted by Marjorie at 7:28 pm No comments: 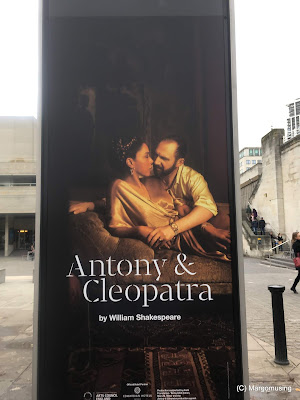 I was originally due to see this production, which stars Sophie Okonedo as Cleopatra, and Ralph Fiennes as Antony, early in its run, but I was unwell, so would up switching the ticket, and went at the weekend.  It's a long time since I have seen a production of the play, in fact I think I've only seen it once before, with my school as it was one of my A-Level English texts.

This production was at the National, and had a modern setting, which meant that Egypt was all sunken pool, soft velvet-upholstered seating and the occasional sun lounger, and Rome features lots of sleek modern furniture, sculpture and fashion, with, once battle is joined, hi-tech military surveillance kit.


The production was very good,  Sophie Okonedo and Ralph Fiennes as the titular couple are excellent. At the outset, Antony appears to be in full mid-life crisis mode, barefoot, dressed in Hawaiian shirt with beads. He appears totally besotted with Cleopatra, understandably enough. If there is a weakness in the production, it is perhaps that Fiennes never really shakes off that image, to become the powerful and successful general his reputation suggests.

Agrippa is played by Katy Stephens and having the role played by a woman adds an interesting slant to the character's relationships with Enobarbus (Tim McMullen) and with Caesar.  And Caesar (Tunji Kasim) is presented as young, and inexperienced - very well done.

I did, I admit, feel a little sorry for Enobarbus,remaining loyal to Antony when good sense would suggest otherwise, before dying of a broken heart when his eventual betrayal  is forgiven!

Oh, and a rel live snake. (although not, I think, and actual Asp. Method acting apparently has its limits!

The production is on until 19th Jan, and it was filmed and broadcast for NT Live so there may be encore showings if you fancy seeing it.

Posted by Marjorie at 8:38 pm No comments:

Tamburlaine at the RSC

On Saturday, I met up with a couple of friends to see the RSC's production of Christopher Marlowe's Tamburlaine.

It's not a play I am familiar with,  I knew that it was reputed to be bloody, but that was it.

It is the story of Tamburlaine the Great (Jude Owusu) (loosely based on real life Turco-Mongolian conqueror Amir Timur). In the play, he starts out as a small time Scythian Shepherd / bandit, who continues upon a path of conquest and destruction, which ends badly for most of those whom he encounters.

He captures the beautiful Zenocrates (Rosy McEwen), daughter of the Soldan of Egypt, who is en route to marry the King of Arabia, and falls in love with her. His wooing takes the form of killing one of her travelling companions and conquering large parts of Persia, Africa and Turkey, as a selection of other, better established kings and emperors try, and fail, to withstand him.

He shows himself to be an immensely successful soldier and conqueror, bloody and merciless towards his defeated enemies. Which means  a lot of blood...      He keeps the (former) Emperor of Turkey, Bajazeth, prisoner in an iron cage, (resulting in said emperor eventually killing himself)


Later, we see Tamurlaine as emperor, continuing to conquer kingdoms, punish those who stand against him(at one point he orders the killing to a group of Vestal Virgins sent to plead on behalf of their besieged city,although in an uncharacteristic moment of compassion, he does spare the life of Zenocrates' father.!

There's a fascinating scene where Sigismond the (Christian) King of Hungary, signs a treaty with Orcanes, the (Muslim) King of Natolia, to agree to make peace in order that Orcanes can concentrate on defence against Tamburlaine.

Sigsimond bows to the advice of his generals, who convince him that vows made in the name of god but to a non-Christian should not be considered binding,  breaks the treaty and attacks Orcanes' forces, whereupon he is promptly, and justly, defeated, despite his superior forces. (Orcanes, like everyone else who tries to fight Tamburlaine, is of course defeated in due course.)


During the interval, there was some intensive mopping of blood from the stage, and when we returned, many years have past, and Tambulaine is  emperor of Persia, and he and Zencrates have 3 adult sons, the younger two being bloodthirsty fighters ,after their father's heart and the eldest,  Calyphas, being more interested in poetry and girls, which results in his being killed by his father for not taking part in a battle..

In the second half , we see Tamburlaine conquer Babylon, and create a chariot drawn by a selection of the Kings he has defeated. (there's also a charming scene as he has the tongue of one of them cut out for talking back at  him)

He is, however, unable to control  life, and is cast into grief when Zenocrates falls ill and dies (in a demonstration of his total sanity and level-headedness, he reacts by razing to the ground the city where she died, and having her body embalmed  to carry around with him. As one does.) He also becomes, if possible,even more convinced of his own power, burning his copy of the Qu'ran and deciding, when he is not truck down for this sacrilege, that he is greater than god.

Tamurlaine is defeated, not by his many enemies, but by his failing body. He names his son as his successor, and demands that he be buried with Zenocrates.

Over all, the play was interesting, if extremely bloody. I found the treatment of religion very interesting. Although Marlowe is a little confused (his Muslim characters reference 'Mahomet', as the 'friend of god, just as the Christian ones speak of christ the son of god, but also speak of various Roman gods,  but for a 16th C writer seems less prejudiced than I expected!  And no moral!

We saw the matinee on the last day of the run, so I can't recommend you go, but it was good!
Posted by Marjorie at 8:51 pm No comments:

The NT production of Macbeth which I saw back in May was touring and came to Bath, and  I's booked a ticket for it before I saw it the first time. I was in 2 minds as to whether or not to go, as I wasn't overly impressed with the production, but in the end, I did, and I was glad I had.

The production seems to have been tightened up considerably, and worked much better on the smaller stage in Bath than it had in the National Theatre, the smaller stage created a slightly claustrophobic feel, which worked well with the post-apocalyptic setting.

The cast also differed from the London production - Michael Nardone as Macbeth, and Kirsty Besterman as Lady Macbeth., and at the performance I saw, Banquo was played by Reuben Johnson, the understudy.

I enjoyed it more than I expected to.
Posted by Marjorie at 9:38 pm No comments: