In Which There Are Skulls, and a Lion Hunt

As I was in London anyway, for the purpose of seeing the talented Mr Webley, I decided to take the oppo 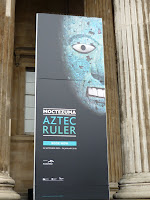 rtunity before heading home, of visiting the Moctezuma exhibition at the British Museum. After all, it is all about Mexica, with skulls, human sacrifice and and bloodshed - what's not to like?
Of course, in an ideal world, I would have thought to check before I left the hotel, what time the museum opened, but as it turned out I was able to find a convenient coffee-shop to sit in, watching the rain fall and reading about Shakepeare's London for 45 minutes until the museum opened.
They have a temporary garden in the courtyard outside the museum just know - it is part of a collaboration with Kew Gardens, to accompany the 'Gardens of Jodhpur' exhibition, so I did wander past the Baobab and Mango trees briefly, before heading indoors into the dry.
The exhibition was fascinating. I knew, of course that the Aztec* civilisation remained until the conquistadors arrived with their guns and small pox, but I hadn't quite put the dates together in my mind to realise that in the 16th Century there were people carrying out human sacrifices, hunting using obsidian axes and so on. 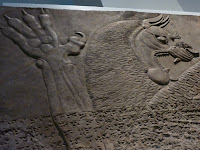 There were a number of skulls, including a genuine human skull which 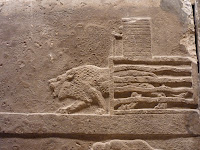 had been beautifully covered with turquoise and jet mosaic, and fitted with straps to allow it to be used as a mask. Delightful. There were also a number of manuscripts, written by the conquistadors but illustrated by Aztecs. Beautiful but sad - a record of the end of a civilization.
After seeing the exhibition I spent some time in other parts of the museum - the Assyrian rooms, featuring many beautifully carved reliefs, including a whole set featuring a lion hunt. (I felt sorry for the lions. 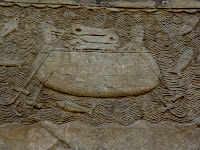 They started out in cages, and n 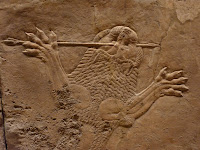 ever seemed to be allowed to win, or escape.) There were also many chariots, and some not-altogether-seaworthy boats, although I am not convinced that they were an integral part of the lion hunt! I find it incredible that they are so clear and relatively undamaged after almost 3000 years.
I also took the opportunity to visit the Elgin Marbles (after all, who knows how much longer they will be in London) Whtever the rights or wrongs of their ownership, they are beautiful. 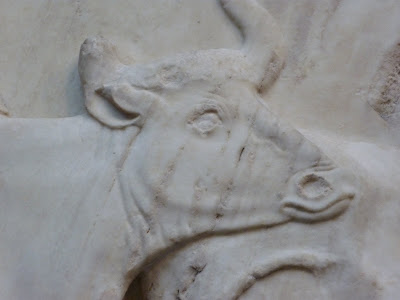 (*Apparently 'Aztec' is an inaccurate, if well known description)
Posted by Marjorie at 10:23 am

re Aztec (or not) is it now "pre-Columbian" or somesuch?

I think it's becuase 'Aztec' is a specific, rather than generic term - equivalent to referring to the whole of the Bristish Isles as 'Welsh'...

" but I hadn't quite put the dates together in my mind to realise that in the 16th Century there were people carrying out human sacrifices, hunting using obsidian axes and so on." me either, until I read that.

Mmmm, pre-columbian art!
I love it, it looks both so archaic and modern.