I first became aware of Tanya Moodie when she played 'Hunter' in the BBC TV series Neverwhere, and more recently saw her stunning performances in Intimate Apparel, and Fences, both in Bath, and as Constance in King John, and Gertrude in Hamlet, at the Globe and RSC respectively.

She is an excellent actor, so when I saw that she was coming back to Bath, of course I had to book a ticket!

She is appearing as Wiletta Mayer  in a new production of Trouble in Mind, the 1955 play by Alice Childress. 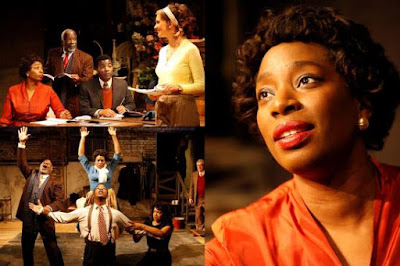 Wiletta is an African-American actress, who has built a successful career in the theatre, catering to the preconceptions and   prejudices of (white) directors and writers.

She is cast in a production of a "progressive" anti-lynching Broadway play, 'Chaos in Belleville', written by a white writer, directed by a white man who is proud of his progressive and egalitarian attitudes, but is far less open-minded than he likes to believe when Wiletta challenges his attitudes.


The play deals with issues of racism (both direct, and subconscious) and is depressingly current, given that it is 60 years old, but there is also a lot of (often dark) comedy, and the pleasure which comes with watching excellent actors.

It's a very good production, and Tanya Moodie's singing voice is a gorgeous addition! I don't think I have heard her sing before!

The play is on until 17th December, and I cannot recommend too strongly that you see it, if you possibly can!  Full booking details here, on the theatre's website.
Posted by Marjorie at 5:11 pm