Being in London to see King Lear, I decided also to see 'Nice Fish' at the Harold Pinter theatre - mostly because it features Mark Rylance, who is a superb actor. 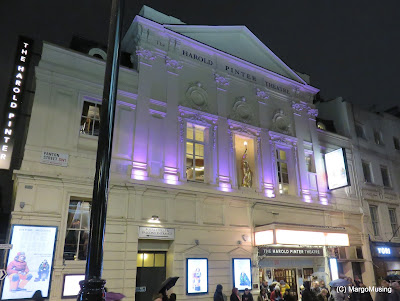 It is set on a frozen lake in Minnesota, so the stage is entirely covered in 'ice', and when Rylance (Ron) and his co-star, Jim Lichtscheidl (Erik)  first appear they are suitably dressed for ice-fishing, in thick, padded parkas, hats and balaclavas, nothing but their eyes visible.

It is a very odd play; in fact it is less of a play and more of series of vignettes. It's written by Louis Jenkins, a prose poet, and Rylance, and is low on plot but high on gentle humour and reflections on life. 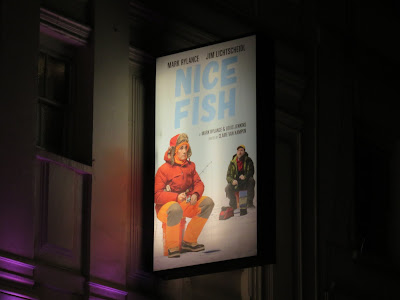 There are also little puppets, used to show the characters in the distance, and the whole thing is entertaining in a strange, understated way. And there's a perfect moment as 'Erik' attempts to put up a pop-up tent, and Ron 'helps', inadvertently collapses it around him!

It gets a little darker as the evening progresses, with poignant reflections on age and loss and death.

Ultimately - strange but good, and I do like Mr Rylance - he's the best thing about the production.

And if you go to the box office dressed as a fisherman (with rod and line) or as a fish, you could win a pair of tickets. How many west end plays can offer that?

It's on at the Harold Pinter Theatre until 11th February.
Posted by Marjorie at 7:39 pm