I love Dave McKean's Art, and have had the pleasure of seeing him speak and perform on a number of occasions, so when I saw that he would be appearing at Tate Britain, on Remembrance Sunday to give a performance related to his new graphic novel, Black Dog: The Dreams of Paul Nash I immediately booked a ticket. 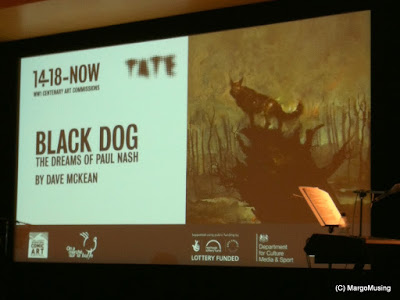 I have to admit that I know very little about Paul Nash, and though I have seen some of his paintings, I would not claim to be familiar with his art. But I read a little about him before going - he was born in 1889 and having originally worked primarily as a landscape artist, he then became a War Artist as a result of his service in WW1.

The performance on Sunday was a film of Dave McKean's new book, with live music from Dave himself (keyboard), Clare Haythornthwaite (violin) and  Matthew Sharp (Cello and voice) plus spoken word narration and dialogue. 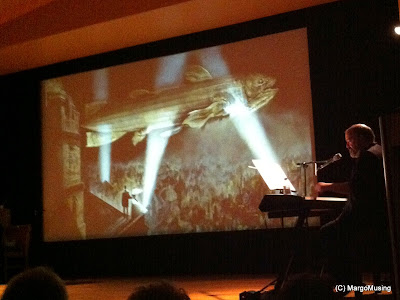 It was beautiful and haunting, exploring Nash's experiences and his response to them, his struggles with depression and with the impact on Nash's art of his experiences.

As far as I know, there are no further performances planned, but the book is available from all good bookshops. It's beautiful.