A few months ago I saw that John Simm was going to be appearing in a play in London, and as I still haven't really got over the fact that I missed seeing his Hamlet when that was on, I decided that this time, I'd make it to see him.

He is appearing in The Hothouse, and as I realised after booking, not only does it feature Simm, but also Simon Russell Beale (who I last saw in the cinema broadcast of the National Theatre's Timon of Athens). The rest of the cast is equally impressive:
Harry Melling (best know as Dudley Dursley, but unrecognisable)
Christopher Timothy (who has got somewhat older since playing James Herriott),
Clive Rowe (among other things, he was in the Voyage of the Damned episode of Doctor Who),
Indira Varma (Suzie Costello of Torchwood) and
John Heffernan (I don't think I've seen him before, but I think he is going to be one to watch) 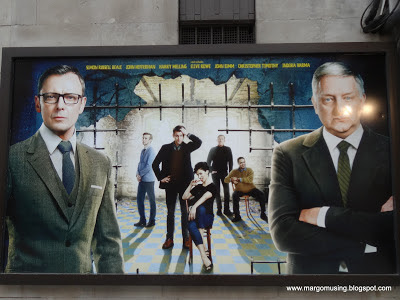 I haven't seen the play before, and decided not to read any reviews before seeing it, so as to see it fresh.

The play is set in an Institution. It's never explained what  kind of institution, whether it is a rest home, a psychiatric hospital, or something more sinister - we never see any of the inmates (patients?), although we hear wails and screams, and learn that they are known by numbers, not names, and that they are locked into their rooms., and everything is run under the distant control of The Ministry

Simon Russell Beale is Roote, the director of the institution, initially merely ineffectual, but as the play proceeds, increasingly, frighteningly unhinged and unpredictable. Simm's Gibbs is coldly efficient, the perfect 'company man', apparently more in control of himself than the other staff members, (and perhaps therefore more culpable) .

As the play unfolds, we learn that one inmate has died, another has given birth, probably as a result of rape by one of the members of staff. We see the hapless Lamb (Harry Melling) subjected to mental and physical abuse in the name of experimentation, and things do not end well.

Despite the nature of the setting and subject matter of the play, it is full of very funny moments - as long as you don't think too closely about what you are laughing at. It's a very strong cast, and well worth seeing.

(oh, and I'm even more disappointed I didn't get to see Simm as Hamlet)