For some reason, we get two bank holiday Mondays in May. (I feel they could usefully move one of the into the bank holiday desert which runs from August to December, but they are nice when they happen)

This weekend has turned out to be warm and sunny, and I decided to make the best of the weather on Monday, by visiting one of our local landmarks, the White Horse at Westbury. 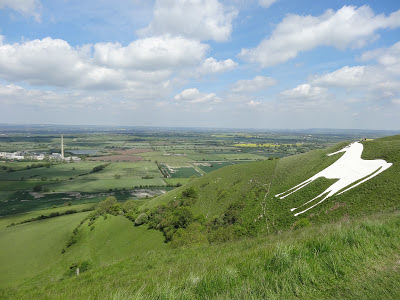 Bratton Hill at Westbury has clearly been an important place for a very long time. There is a Neolithic Long-Barrow there, around that the walls and ditches of an Iron Age fort. 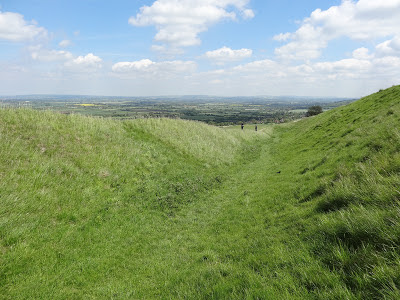 It's difficult to give an idea of the hill fort from pictures - the one above is taken from the ditch between the inner and outer wall - the whole thing is very big, and dramatic (and full of sheep)  You can see it fairly well on Google Maps.

The fort is about 2,000 years old, and it appears that the Iron Age population preserved the Neolithic Barrow inside the fort.

The White Horse itself is believed to have first been carved into the chalk of the hill in the mid 17th Century, although it was re-cut in the 1770's by someone rather better at drawing horses, and since the 1950s it has been covered in concrete, which doesn't require so much maintenace. 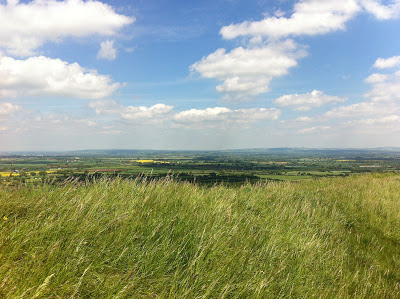 I love the new facts one can learn by reading the information boards at places like this. I knew that there are lots of White Horses around the place, and that most of them are fairly modern (Uffington is the exception, being about 3,000 years old).

What I didn't know is that one of the reasons so many 18th Century West Country land owners chose to add white Horses to their hills was that there was a belief that the original, Uffington Horse had been carved by (Or at least on the orders of) King Alfred the Great, to commemorate his victory over the Danes, and of Christianity over Pagans, and therefore the White Horse was seen as symbolic of that fine, upstanding English Christianity personified by King Alfred.

Another reason may have been as a demonstration of more modern patriotism; a white horse features on the coat of arms of the house of Hanover, and of course George I, the first of the Hanovarian Kings of England, came to the throne in 1714, about 25 years before the Westbury White Horse was first recorded. 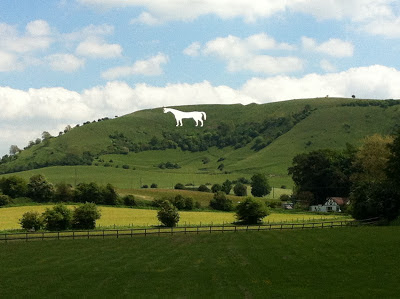 We shall probably never know, but whatever the reasons for its creation, it's an arresting sight, and a lovely site for a walk.
Posted by Marjorie at 10:25 pm