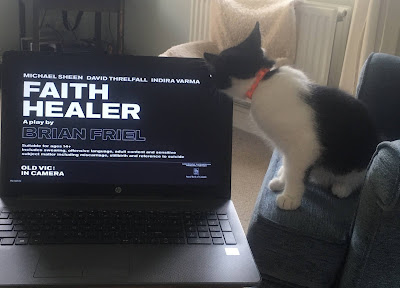 So, the Old Vic has been doing a short run  'Old Vic In Camera'  of plays performed live on stage to an empty theatre and a bunch of cameras.
I booked a ticket, and duly got my 'Zoom' link to watch live.  It was an interesting experience - I mean, a kitten blocking my view is not something which normally happens at the theatre, but on the other hand, the seating was much more comfortable than most theatres, and the refreshments cheaper!
The play itself is interesting - it consists of 4 monologues, by Francis Hardy, the titular Faith Healer (played by Michael Sheen) his wife, Grace (played by Indira Varna) and his manager, Teddy, (played by David Threlfall),and then Hardy again,  as they reminisce about events in their life on the road, and we the audience get to gradually  unpick the contradictory stories they tell, and to get drawn into their love and grief and loss.
The intimacy created by the filming, and the power of the actors, made it a very intense, gripping play, and while there were a few issues with the format - some distracting super close-up, zoomed in so you could not see the whole of the actor's face, for instance, and one or two moments when there was interference with clothing brushing against mikes, but over all it worked well, and I did like the feel of watching live rather than a recorded or edited performance.
I shall keep an eye out for others.
I admit, I would not be willing to pay as much as for a 'real' theatre ticket, but was happy to pay at the lower end of the available range. I would be happy of theatres were to consider similar options even when we are once again able to return to 'normal' live events - there are ,I suspect, a lot of plays productions I wouldn't travel to London and pa £40+ for a ticket for, but would be happy to pay £10-£15 to watch live on the small screen, and no doubt there are a lot of others who can't get to the theatre who would do the same. Perhaps a fixed camera, 'sitting' in the centre of the Royal Circle or equivalent during a live performance,  could become the norm, to widen the range of options for those of us who love live theatre!
I am slow writing up this post - I watched on 19th Sept, and the run was only for  4 days, They will be ding 'A Christmas Carol' at Christmas, however, and while tickets aren't yet on sale, you can register to be updated when they are, and, of course, as the event is online, you can watch from anywhere in the world, although as it's live, your timezone may dictate whether or not it is at a suitable time of the da y or night! (Details on the Old Vic website )
Posted by Marjorie at 2:29 pm