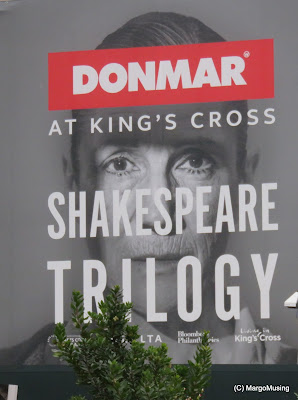 Phyllida Lloyd first directed her all-female version of Julius Caesar 2 or 3 years ago, at the Donmar Warehouse, and followed up with a production of Henry IV, with a final production of The Tempest.

And all three are now being performed as a trilogy. People can see the plays separately or, as I did, can see all three in one day.

All of the plays are performed in the round (or technically, in the square), and are set in a women's prison, which does add an extra layer to the plays. Each actor plays the role of a prisoner, as well as their roles within the plays, and each play is introduced by  different actor, in character, explaining their character's offence, and there are moments in each play when the prison environment breaks through, and the play is interrupted, by the 'guards' or a person falling out of character. (for instance, in one of the tavern scenes in Henry IV, as Falstaff quarrels with the  'Hostess' (Zainab Hassan), they insult her increasingly personally, until she breaks character in distress and and the 'guards' intervene)

This works surprisingly well, and invites us, the audience, to pay attention to the parallels in the plays with the prisoners own lives, and how the plays may speak to them.

Seeing all three plays together was amazing - for one thing, it allows you to see how incredibly versatile and skilled the actors are, but also to see how their characters develop.

Clare Dunne's Portia was as eloquent as Mark Anthony - every un-heard and ignored woman..

Henry IV (which compressed Parts I and II into about 2 hours) featured Harriet Walter as Henry IV, tired, world-weary, less querulous than is sometimes the case, and obviously a prisoner of his own crown, softening the final scenes as Hal tries the crown.

Jade Anouka was an excellent Hotspur, and Clare Dunne as Hal,resplendent in headphones, baseball cap and Chelsea shirt!

The scenes as Hal draws back from his relationship with Falstaff are made particularly poignant by the setting - Dunne introduces the play in character as a prisoner about to be released after a drug-related sentence, and so the farewells, and the idea of giving up excess and debauchery echoes with the 'reality' of the prisoners' respective positions.

The Tempest was, of the three plays, the one which  was most sceptical about, in terms of whether it would work in the pared down 'prison' setting, given the magical and fantastical content, and of course it was bound to draw comparison with the wonderful (and high-tech) RSC production we saw last week.

I need not have worried. Of the three plays this was perhaps the most successful.
Harriet Walter as Prospero gives a searing, heart-breaking performance - she introduces this play in character as 'Hanna', an inmate in her 60s, in her 4th decade of a life sentence - it highlights the way that the Island is a prison, despite Prospero's power there, and her grief and regrets.

The play also draws in the audience - on entrance we were all given tiny torches, which were used to create hundreds of stars, almost the only 'special effect' in the production.

Jade Anouka was again a stand-out performer, as Ariel, and the 'spirits' which guide the shipwrecked mariners were all dressed as prison guards, an insight into the 'inmate's' view of their situation.

As the play ended, rather than bringing the curtain down on Prospero's final words:

And my ending is despair,
Unless I be relieved by prayer,
Which pierces so that it assaults
Mercy itself and frees all faults.
As you from crimes would pardoned be,
Let your indulgence set me free.
the production leaves Hanna alone in her cell (reading Margaret Attwood's 'Hag-seed') while the other inmates, not in civilian clothing, say their farewells, thanking her for her support and help.

It's an infinitely moving way to end the performance, and the trilogy.

I would urge eveyone who can to see the trilogy, although that may be tricky -the run at Donmar Kings Cross finishes on 17th December.

However, they were filming the performances I saw, so (though the cameras were a little intrusive at times) I think this must mean there must be a reasonable chance that it may be available in cinemas or on DVD at some point in the future. Which is a Good Thing.

I would love for anyone who thinks that Shakespeare isn't relevant to modern audiences, or isn't for them, to see these plays.

(Edited to Add: The company have created more background for the prison Characters, which can be found at Donmarshakespearetrilogy.tumblr.com )