In Which there is Jonathan Coulton, Paul & Storm and lots of Rock!

So, last night was the Jonathan Coulton and Paul and Storm gig in Bristol. 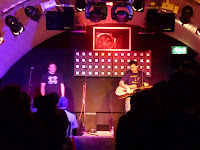 I've been looking forward to it ever since I saw that they were coming to Bristol, and I have to say that the show lived up to and beyond my expectations!

I arrived early having offered to help out with merchandise, and met with Paul and with my fellow Merchandise Minions, and started selling the occasional T-Shirt and CD. 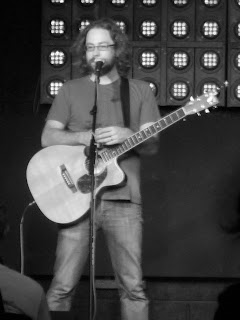 The venue is fairly small - it's called 'The Tunnels', and, as the name suggests, is in, well, a couple of tunnels. They are part of the sub-structure around the railway station, although these particualr ones are arches under the station approach rather than under the railway itself. One tunnel has the bar and a seating area (and the merchandise table) and the other the stage & seating - I think for around 175 - 200 people.

I'd only previously seen Jonathan and Paul & Storm when they appeared as Neil Gaiman's support band when he did a Graveyard Book reading in Manchester last October, and on that occasion we only got one song from each of them. This time, I'm happy to say, there were lots and lots of songs. (although no tambourine-playing authors)

Paul and Storm opened the show with, appropriately enough, 'Opening Band' - they later asked how many of us had *not* seen them live before (answer: all but 3 of us!) and also treated us to lots more music, including 'Frogger! The Frogger Musical' , 'Live' and 'Nun Fight', before giving us 'The mother's Day Song' and 'The Captain's Wife's Lament' (With enthusiastic audience participation on all the Dejected Arrrs.

During the interval I was kept busy selling lots of Dejected Arrr T-shirts (and other stuff. But mostly shirts) and had to dash to get back to me seat when Jonathan Coulton came on stage for the 2nd half...

There was, unsurprisingly, a lot of audience participation. In fact, Mr Coulton described us as the 'singy-est audience since Dublin', and let us sing 'Still Alive' by ourselves,

with hardly any Headline Singer participation at all - this led, inevitabley, to consideration as to whether there was anyone in the audience who could play guitar, which would allow for the possibility of a gig going ahead without any singer or band at all!

Lots of favourites - Code Monkey, Creepy Doll, Skullcrusher Mountain, I Crush Everything, Mandelbrot Set, You Ruined Everything, Mr FancyPants (with An explanation that 'pants' doesn't have quite the same meaning in American as it does in English..), I'm Your Moon -


The Future Soon, Shop Vac, and, then, as the evening was drawing to a close, we all had a quick lesson in how Zombies sing (ragged, none to tuneful) in order to perform our part...


After which there was just time for a couple of quick encores ('Talk with George' and 'the 1st of May' song, which I won't embed here as it's not exactly safe for work...) and lots of happy, clappy people joining in!

We were then very busy selling more T-Shirts and CDs as people left, and once eveyone had gone, were able to lend a hand packing up the unsold stuff, and to have a chance to chat a little to Jonathan and to Storm. 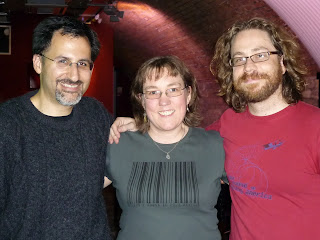 I didn't get home until almost 1.30 in the morning, totally exhausted, but I can't remember last time I had so much fun.
Posted by Marjorie at 10:38 am

Email ThisBlogThis!Share to TwitterShare to FacebookShare to Pinterest
Labels: Being a Minion, Jonathan Coulton, Music, Paul and Storm, Rock

That's been one hell of a busy month for you, Margo - and we're still only halfway through it! I'm impressed.

I am even MORE jealous.