In Which there is an Excellent Night Out (With no Tambourines)

On Saturday evening, I went to Union Chapel, to see the 2nd of Amanda Palmer's gigs there. It turned out that the tube's Victoria Line wasn't running, so I left myself extra time for the added cahnges, and to walk up to the venue from Caledonian Road. 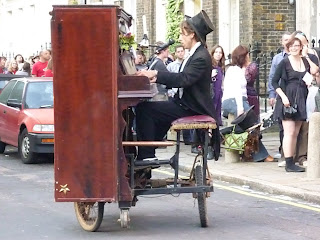 When I arrived, there were around a dozen people outside the chapel, so I decided to go & find some food... in which I was entirely sicessful, finding a sushi restaurant about 200 yards down the road.

When I got back to the Chapel the queue was much longer, and was being kept entertained by several puppets, the amazing cycling piano, and a black-robed, performance artist (?) collecting sins. . . All of this, together with interesting people to talk to, made for a much more interesting queueing experience than I had expected! I did have to change queues, however - there were queses going both ways from the front door, but it turned out that one was for people who were collecting their tickets, and I had joined the wrong one :-( Fortunately found out soon enough that I was able to joint the correct queue while it was still a semi-managable length.

Union Chapel itself is a fascinating venue. It is still a working church, having been built in the 1870s and being one of London's earliest non-conformist (Methodist) churches (As far as I can make out, there was a chapel there from 1806, but the present building was built in the 1870s) The Chapel is Octagonal, with pews arranged in blocks facing the front and sides of the stage area, and with a slightly raked floor - when the chapel was built, they specifically wanted to make sure no-one's view of the preacher was obstructed, which makes it ideal now as a venue. There are also galleries above the main body of the chapel, and the dramatically lit pulpit and carvings, the Rose Window above the Pulpit / Stage and the tea-lights arranged around the base of the balconies, gave it a real atmosphere. We were able to find space about 5 pews from the front, on the left hand side, which gave us a very good view.

The gig started with the support act - Polly Scattergood who is a was very glamourous in silver dress and pink feather accessories, and who sang 4 or 5 songs - she is a 22 year old singer from Essex whose debut album came out earlier this year - I enjoyed her performance although I found the band (esp. drums) a bit too loud both for the size of the venue and for her singing! 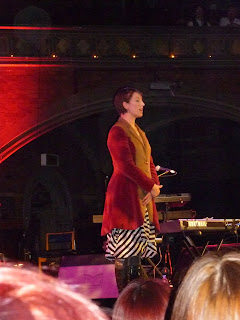 announced Amanda, after which there was a long pause where we applauded first an empty stage, then Beth bringing drinks and a play-list, and then Amnanda herself. She opened the show singing 'The Wind that Shakes the Barley' without accompaniment, which was beautiful, and then took off her (also beautiful) coat, sat down, and started to talk and sing to us.

The set included 'Ampersand', some Dresden Dolls numbers, a new song ('The Bed Song') which I now really want to hear again and several 'ask Amanda' segments, with Amanda answering questions which had been written out and left for her at the door - including one about what she is reading at present (among other books, some short stories by some obscure British author called Neil Gaiman, apprently..... )

There was also an unexpected Organ solo played on the Chapel's pipe organ by a young man whose name I didn't catch, and Amanda herself played us some Bach, taking care to explain to us that it was by Johann Sebastien Bach, not just any old Bach as we might otherwise have thought. I didn't hear her say which particular piece it was and my Bach-recognition skills are not sufficiently well honed to be able to identify it unaided, but it was damn good, is all I can say!

The unexpected classical interludes were not the only unforeseen parts of the evening. In honour of our being in a church, Amanda explained that there was a Hymn which she planned to play, and to accompany a different vocalist, a certain Mr N. Gaiman.Mr Gaiman is of course best known for his mastery of the Tambourine but it turns out he can sing, too. The song 'Jump' was one which Amanda apparently sang at the Friday night gig, and as she didn't want people going to both gigs to get bored had decided that the variety provided by getting Neil to sing it this time.

I think I can say, in all honesty, that this was an inspired decision! 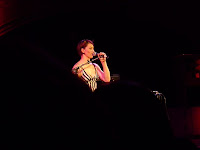 Nor was Neil the only guest artist. Amanda also had, quite literally, a second guest artist who produced a large (approx 5' x 5') painting over the course of the two nights, which was then autioned off for £500 towards the end of the show.

Polly Scattergood also returned to firstly providethe vocals to Amanda's keyboard for a surprisingly poignant rendition of 'Puff the Magic Dragon', and then Polly and her band returend to accompany Amanda performing 'Oasis'.

Which, appropriately enought, was introduced by Amanda explaining that we were all going straight to Hell, for playing it in a church. . . Judgeing by the extremely enthusiastic audience participation, no-one was overly concerned for their immortal soul!

Sadly, all good things must come to an end, and the gig was due to finish at 10.30. After much cheering and stamping of feet and a standing ovation, Amada did return for an encore - her version of Tori Amos's 'Me & a Gun' - which she sang unaccompanied, bringing the evening full circle from her opening number which was also unaccompanied. 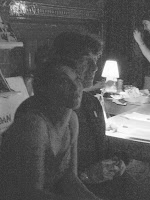 Much to my (and many others') delight, Amanda & Neil then came out to sign stuff by candlelight in the almost total darkness at the back of the chapel, so I was able to get my copy of the WKAP book signed by them both (complete with Neil's confession to thetitle question...) Much to my pleasure & surprise Neil recognised me from our meeting back in July (I'm sure having an unusual name helps!)

After getting the book signed I by Neil and Amanda I was also able to find Beth and get her, as one of the photographers in the book, to sign it also, and to give her some keys for her collection and ask talk about cats for a little.

As I left the venue I was delighted to see Oliver, (Pianist of the Flaming Piano) emerge, mount the piano, light the candelabras and cyle out into the Islington traffic, playing as he went.

My only regret is that I did not get my camera out quickly enough to capture the utterly bemused and disbeliveing expression on the face of the black-cab driver coming the other way.

All in all, it was a practically perfect night. So often, things you have been looking forward to don't live up to expectations but in this case, my expectations (which ere pretty high to start with!) were exceeded. I just hope that Amanda will be tourig the UK again soon, so I can do it all again!
Posted by Marjorie at 11:59 pm

Union Chapel is fantastic - I've seen a couple of gigs there over the years, including Lisa Gerrard (ex of Dead Can Dance) which was utterly suited to the venue, and The Creatures (the band of Siouxsie Sioux post-Banshees) which was awesome.

Sure I've seen someone else there, but memory now fails on who/whom. I must be getting old or something...

Had no idea Mr. Gaiman could sing. How wonderful that he recognized you, too. What a delightful event. Thank you for sharing.
Best,
Billy Bones

Lyle, it was a great gig, and yes, Union Chapel is fantastic - I've never been before, but I approve. I did over hear a few complaints about not being able to bring drinks into the chapel itself but I have to say I didn't miss it at all!

Billy - I was mst impressed by the singing & the recognising - as you can see/hear from the video, perhaps not the most musically challenging song in the world, but very nicely done (and without geting the giggles or stage-fright from singing in front of 1,700 music fans, either!)

Thanks for popping by.

Actually Neil seems to have an EXCELLENT visual memory...

Sounds like a brilliant gig (including the queuing and I am MOST jealous.

I agree, it was a brilliant evening and the Union Chapel is a great venue. My review here.