Happy Potter and The Cursed Child

Two years ago I saw 'Harry Potter and the Cursed Child' when it was still in previews, and I thought I would like to see it again, from a different area of the auditorium to see some of the special effects from a different angle.

On a second viewing, it's still a lot of fun. There is a whole new cast, featuring Franc Ashman as Hermione, Jonathan Case as Scorpius, Joe Idris-Roberts as Albus, Jamie Ballard as Harry, and James Howard as Draco. 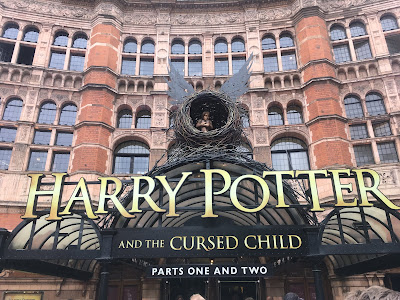 I enjoyed trying to spot how the various bits of magic were worked, and simply enjoying those that I couldn't work out, and it was fun, too, to see how the different cast performed their roles. 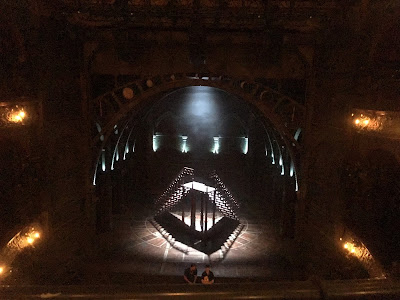 However, it's fair to say that the somewhat clunky and predictable plot drags a little (more) on a second viewing. 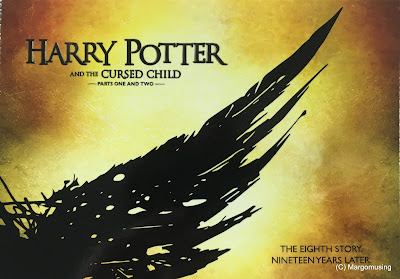 Overall,fun, but with an element of diminishing returns.

Henry V - Shakespeare At The Tobacco Factory, at the Ustinov Studio

I don't think I have seen any previous Tobacco Factory productions, but I like Shakespeare and I've tended to enjoy plays at the Ustinov, so I was optimistic I would enjoy Henry V, and I was not disappointed.

The production, (directed by  Elizabeth Freestone) has a modern setting,with a minimal, stripped-down set.

At the outset, Ben Hall, as Hal, is still the party prince we know from Henry IV, returning home after a night out, and  the opening scenes, as his lords and bishops discuss his rights to the throne of France, takes place while they assist him to dress and wake up.

As the play progresses, he becomes more confident, but also more vulnerable - appearing a little uneasy in his power, and st times overwhelmed.

The threats made to the 'half achieved Harfleur' speech are made via radio, setting up an interesting question as to whether, and to what extent, Henry is bluffing, as his aides appear appalled, almost on the verge of interrupting him.

The production combines the roles of the Dauphin and Katharine,(played by Heledd Gwynn), which makes for a fascinating and deeply moving slant on the final scenes, and Henry's proposal. Her scene learning English vocabulary, as she cradles the body of her lover, one of the prisoners killed on Henry's order, is extraordinary.

It's a very good production, (and it was good to see women playing Exeter, Monyjoy, Bardolph and the Chorus, as well as the Dauphin) 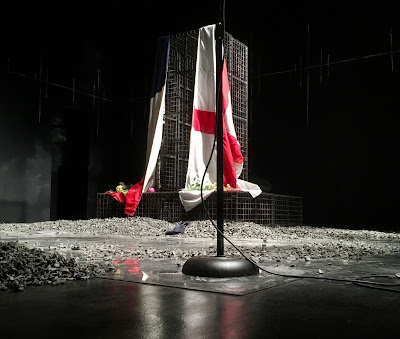 The play is at the Ustinov until 21st July.
Photos of the show, and tour dates here
Posted by Marjorie at 2:28 pm No comments:

While I was in London last weekend I had some spare time, and used it to do a little bit of sight-seeing.

I called in to Westminster Cathedral, which is a Roman Catholic cathedral, built between 1895 and 1903 - it's built from brick, so on the outside it has a flavour both of Victorian municipal building and Italian church - I can't help but think that the architect had seen Siena but didn't have the budget (or the marble) 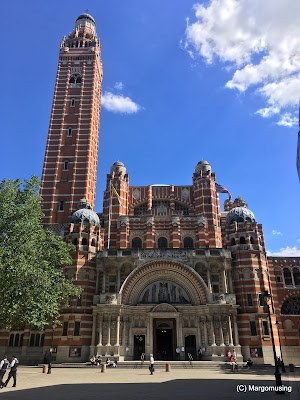 Inside, it isn't completely finished, but those parts which are complete are Neo-Byzantine, with mosaic ceilings. (I do have a very soft spot for a well done mosaic ceiling) 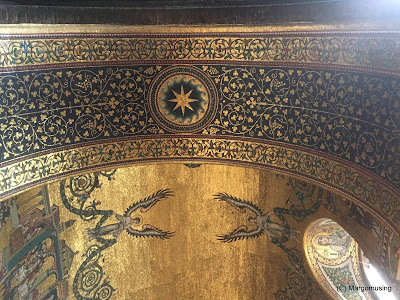 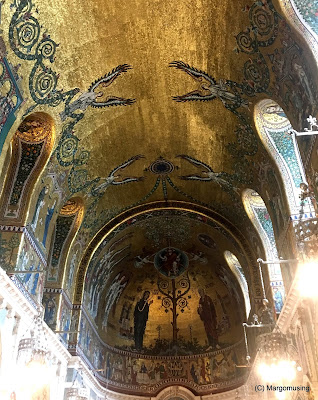 It's impressive, although I couldn't stay long due to the amount of incense!

My second bit of touristing was a visit to the London Guildhall art gallery, to see their (temporary) William De Morgan exhibition.  I am very fond of William De Morgan's work, from when I first came across his work in the Manchester Art Gallery, years ago.

He was a contemporary, and friend of William Morris', and designed and created ceramics - dishes and tiles (including tiles explicitly designed to complement Morris's wallpaper designs. 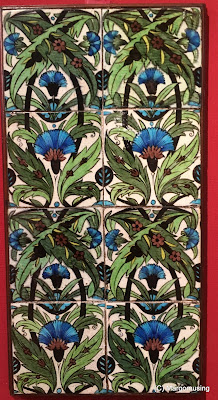 What I didn't know before seeing this exhibition was that De Morgan's father was a celebrated mathematician (Augustus De Morgan) who was an agnostic who became a professor at University College London as, unlike Oxford and Cambridge, no theological test was required. He also taught Ada Lovelace. It seems likely that his skills in maths and geometry influenced his son's designs. 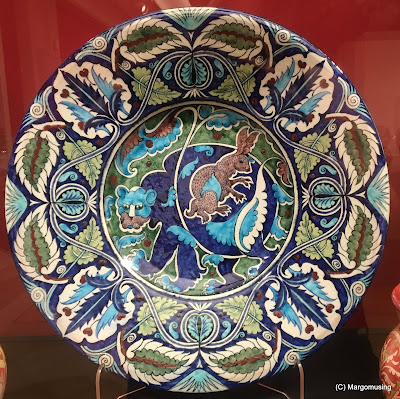 I also learned that William De Morgan designed a set of tiles for Charles Lutwidge Dodgson (better known, of course, as Lewis Carroll), who was a friend of his,  which were installed round the fireplace in his college rooms: they feature Dodos and dinosaurs, among other things. (They are still in the College, but the exhibition has photos) 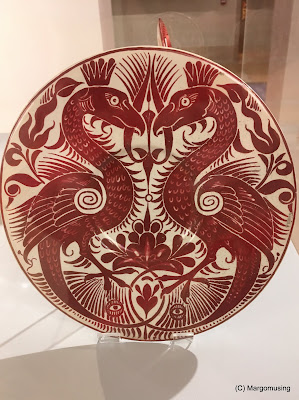 I loved the dragons and fishes, and the fact that almost all of the designs are symmetrical, some of them in more than one direction.

Sadly the Greast Hall at the Guildhall was not open, so I couldn't look round the hall.

However, the church next door, St Lawrence Jewry, was open, so I popped in for a while. The church was designed by Christopher Wren, but was badly damaged in the Blitz, leaving the walls and facade standing but not much else, so the interior and stained glass are modern. I rather liked St Michael. 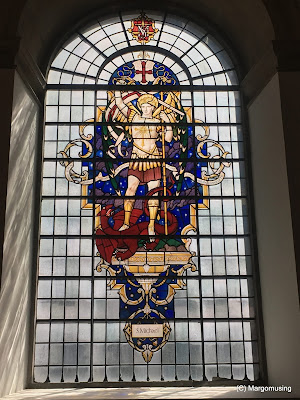 But the best known of the windows is the Christopher Wren window, which features the man himself (flanked by woodcarver Grinling Gibbons and Master Mason, Edward Strong, with the architect and Vicar at the time of the restoration shown at the bottom of the window. 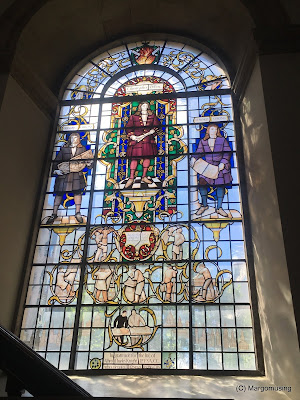 All very enjoyable. As was the duet being played on the church's grand piano, while I was there. It wasn't clear to me whether they were official, as it were, or if they had, like me, simply popped in in passing but (unlike my) had the skills and talent to play wonderful piano duets!

And in between, I got to meet up with one of my cousins, and to have a really enjoyable catch up.
Posted by Marjorie at 9:31 pm No comments: