I have not been blogging recently - partly, of course, because my usual subject matter of theatre trips and exhibitions hasn't been available, (although there are a couple of shows I saw just before all this started, which I had not got around to blogging about), partly because I haven't had the mental energy;   and partly as I have been working from home and spending 7 hours a day staring at a laptop screen, so doing more of it for leisure hasn't really appealed.

It's a very strange time to be living through. I am angry and ashamed at how poorly our government has dealt with the pandemic, the failures in providing adequate PPE, the lack of testing and tracing, and so much more, and,in common, I suspect with most people, I am worried for y family and friends. (My close family are all currently well,mercifully, but knowing how many work in front line medical roles, or have pre-exisiting conditions or vulnerabilities is  a source of constant, underlying anxiety. And sadly, I have friends who have not been so fortunate.)

And of course, it's a situation which adds all sorts of new stresses and problems to being a business owner - I admit to having felt a certain amount of envy of those who are furloughed and have a steady income, at least for the present!

I am primarily working from home - we have furloughed some of our staff, and those of us who are working are, where possible, working from home, while means that when it isn't possible, the office is empty enough that it's possible to maintain appropriate distancing. When I have needed to go in, I've mostly done son during the evening or at weekends, when it is quieter or even empty. After 3 days f working from my dining table, I cleared off my old desk (bought for me by my parents, when I was around 12 or 13) in order to be able to separate my work space from my living space, and a few days after that I manhandled my office chair into my car to bring it home, as sitting at a dining chair for hours a day is...not good. I's much harder work, and less efficient, than being able to work normally from the office, but it's the best I can do right now.

However, it is not all gloom and doom. As well as the stress and anxiety there are positives. I am deeply grateful that I live where I do, in a rural area, with a house large enough that I don't feel too confined, and with the luxury of a garden. I would have found lockdown in my previous house, which was smaller, and where several of the neighbours lived loud and at times volatile lives, and their children had nowhere much to play except the street, much harder.

I already had a good relationship with both sets of immediate neighbours before this started,  which has been a boon - we've checked in on each other,  shared  relevant information about services available in the village, and each time we have a grocery delivery or click-and-collect have checked in to see if the others need anything adding.

My right hand neighbours have even been delivering a paper to me, on Saturdays, (I had mentioned, in passing, that  it was the non-essential purchase I was missing, and as they normally do a run to the village shop for essentials on a Saturday morning,they've been buying a paper and putting it through my door, which is lovely. 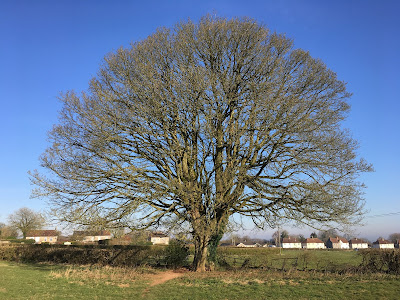 I also feel very lucky that I am am able to go out every day for my one,  government endorsed, Permitted Exercise each day, and that I have such lovely countryside in which to walk. It's rural enough that most days, I either don't see anyone, or just see  one or two people walking or walking dogs, and there is plenty of space to stay over 2m apart.

There are lots of public footpaths, so I can vary my route, and I've enjoyed watching the fields, woods and hedgerows change as Spring advances, from bare branches and frosty mornings, when lockdown started, through the blooming of primroses,  blackthorn and hawthorn, then wild violets, bluebells and wild garlic, and the trees coming into leaf, and now, flower. 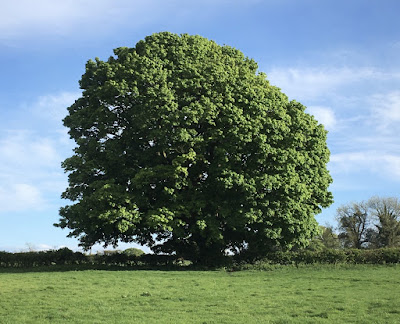 I have also enjoyed seeing more wildlife - initially, it was mostly rabbits, in all the fields, and commoner types of bird, such as robins, blackbirds, bluetits  and sparrows.


I have also spotted wrens several times,which gives me great pleasure. I love wrens, they are so tiny, and so very bolshy and territorial despite their size. (also uncooperative - I haven't managed to get a picture of any of them, yet)

However, as Spring has advanced, and I have explored more and found less frequented paths, I have also seen deer - I've been getting better at walking softly and appearing unthreatening, so I can get closer without causing them to flee.


There have been foxes, gorgeous, bright red ones, and smaller, leaner ones. 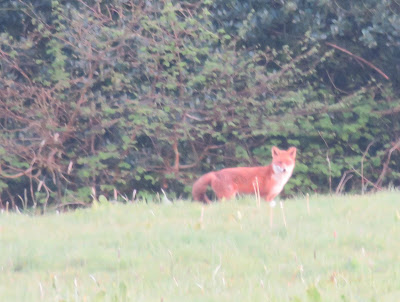 And, in the past week, I even found a den where there are a family of fox cubs 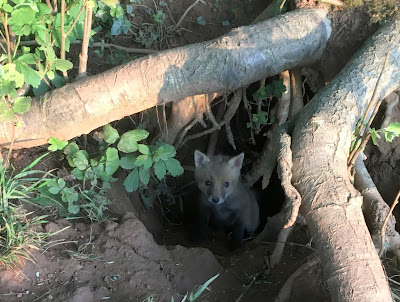 I am not yet quite sure how many there are. I am absolutely certain there are 3, as I have seen three of them at the same time. 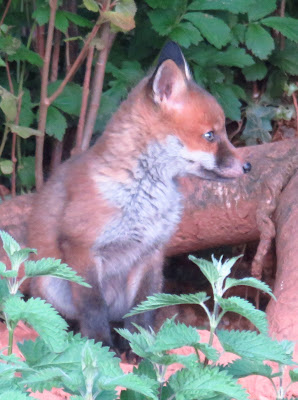 I am nearly sure that there are four, and there might be as many as five. 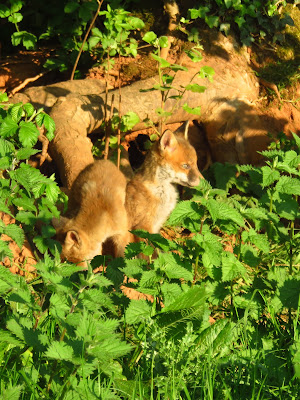 They are adorable - just like puppies, when they relax and start playing they yip and bark and make little squeaky noises, and while they are wary enough to disappear back into their earth if I move to fast or get too close, if I am patient, they will often re-emerge

I saw a rather thin and harassed looking fox in the same field, which I assumed was their mother, but I have since seen another, much larger and redder and sleeker one, too, and have read up and learned that foxes cooperate to raise their cubs, and there will often be a group of 4 or 5 foxes (male and females) cooperating to raise one litter of cubs.

They sometimes have more than one vixen who has a litter, and raise them together, co-parenting fox style, but generally just the most important vixen will have cubs. (Nature being what it is, the strongest cubs get most food and attention,and develop faster - I am hoping that all of 'mine' survive - the smallest of them is (seen in my first photo) is extremely cute, and I really he hope that s/he makes it, as well as the bigger ones.

I have a bigger selection of wildlife pictures on flickr.

My neighbours tell me that they've seen a hedgehog in their garden - I hope it visits mine, too, although I haven't seen it so far, and I am hoping I might manage to see a badger at some stage.

I must go now - my neighbours have just arrived to deliver some scones and cake they have been baking, (from a socially approved distance, of course! )

How is everyone else's lock down treating them?
Posted by Marjorie at 3:48 pm