Several months ago, friends of mine pointed out that the wonderful  Zoë Keating would be giving a concert in London in September , and suggested that we should meet up an go, which, naturally, I agreed would be an excellent idea.

I had stayed with my friends the previous night, which was an added bonus - we got to eat cheese, and snuggle the cat, and catch up, and drink gin. (apparently I have led them astray, into the word of gin).

Then for the main event! 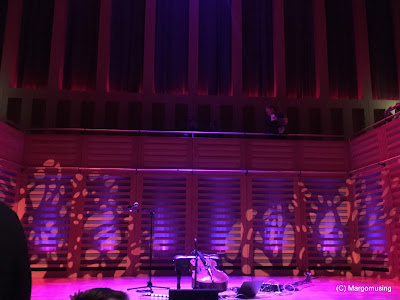 King's Place is a new venue to me, and it is rather nice - big atrium, adjacent art gallery and National Newspaper)

Thanks to my friends, we had excellent seats - dead centre of the third row, which was great.

Zoë then played a mixture of new and older pieces, giving us a brief introduction to each, and taking the opportunity to thank everyone who  provided or offered help (BA lost her Cello and luggage, on the flight from Germany. Apparently it finally arrived just an hour before the concert, so she had spent a lot of time trying to crowd-source a suitable cello an electronics).

It was very good, and came to a close with a little Beethoven. 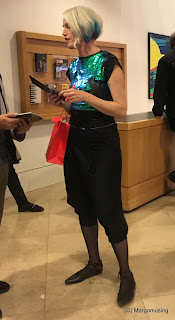 For those of us who then hung around in the foyer, there was the added bonus that Zoë came out and chatted to us, briefly.

If you are not already familiar with Zoë's work, check out her web site (zoekeating.com) and buy the CDs.  You can thank me later.

Posted by Marjorie at 9:27 am No comments:

Coriolanus at the RSC

I've only seen one previous production of Coriolanus, three years ago,  at the Donmar (review here), so I was interested when I saw the RSC were including it in this season. 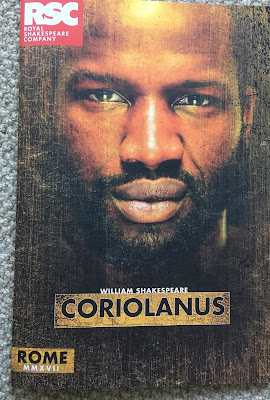 I did enjoy this production, but I didn't find the interpretation of the text as interesting, or Coriolanus's character, as compelling as in the last production I saw.

In particular, Coriolanus seemed to have little agency in his own life, and his final choice, to stop the assault on Rome in response to the pleas of his wife, mother and son, lost much of it's force, as he seemed not to realise the implications, seeming almost surprised that the Volscian's didn't accept his terms. I preferred a Coriolanus who recognised and accepted that his choice would have a terrible personal consequence.

However, I think this was a choice by the director rather than a reflection on the actors involved, all of whim I felt did solid work.


I do find it interesting to see different versions of the same play, and to see how the same text can be interpreted, but in this case, despite strong performances from Sope Dirisu (Coriolanus) and Haydn Gwynne (Volumnia) in particular, I found this one  little bit disappointing.

I fairness, though we did a preview, it may be that the production will find itself as the run continues.
Posted by Marjorie at 8:23 pm No comments:

My friend A and I had booked o see the RSC's new production of Coriolanus on Saturday evening and were thinking about where to eat before the show, and a different friend of mine recommended  Salt, which opened earlier this year, after chef Paul Foster and his wife raised the money to open it, via Kickstarter.

We went for lunch, and chose to go with the tasting menu, which involved 6 courses (plus optional cheese course) and was delicious!

We were tempted to try the special cocktail on arrival - a gin & prosecco fizz, which was also very nice!

The restaurant is small, with a relaxed feel, and the service was friendly and efficient.

After the bread (which was delicious, malty and warm, served with locally churned butter - very rich, with a hint of clotted-cream taste to it!) we started with tomatoes with a linseed cracker and a shaving of cheese - apparently very simply, but a wonderful, rich tomato flavour. 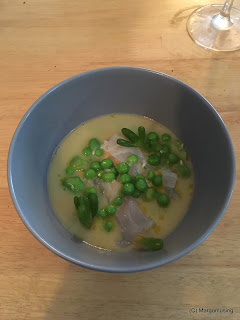 Then the next course was mussel broth, with salted cod, peas and beans (and mussels, and something which I think was samphire. 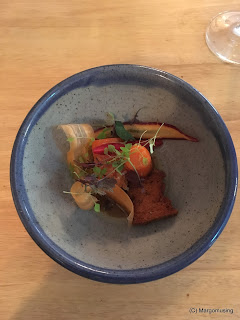 Next came a carrot and chicken dish, 2 or 3 different types of carrot, some cooked in chicken fat, others pickled, together with crispy chicken skin, like a tiny, intensely chicken-y piece of melba toast! 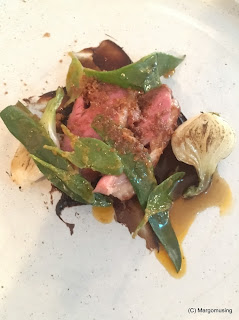 Next came the main, perfectly tender pieces of lamb rump, which came on a black garlic emulsion and with tiny onions and vegetables.

This was followed by the (optional) cheese course, which we, of course, opted to have, after which came desserts - first lime curd with yogurt meringue and sorrel, which was light and refreshing. I'm not normally a fan of meringue, but this wasn't overly sweet, and with the tartness of the lime and sorrel it worked really well. 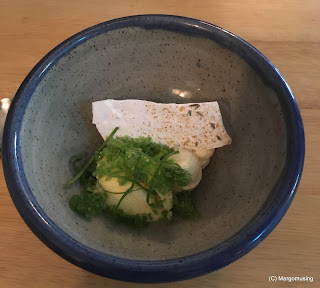 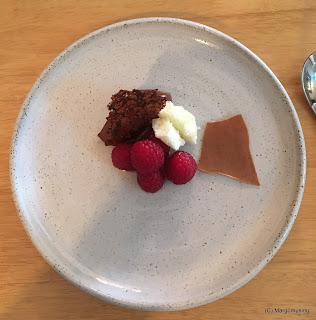 This brought us to the end of the menu, I finished with a coffee and we were given little choux pastry buns to finish with - again,  not over sweet, with more raspberries (possibly freeze dried, I'm not sure).

It didn't feel as though we spent a long time over the meal, but when we came to leave I realised it was almost 4 o'clock, so we have been there over 3 1/2 hours!

A fine meal. I shall definitely be going back, next time I am in Stratford, although I imagine that as the restaurant becomes better known and better established, it may get harder to get a reservation!
Posted by Marjorie at 4:51 pm No comments:

I wasn't sufficiently organised to get tickets to see Yerma at the Young Vic, but fortunately for me, the play was filmed for live broadcast via 'NTLive' so I was able to see it at my local cinema.

I was very impressed, particularly with Billie Piper's incredibly powerful performance as the (un-named) protagonist, who we see as she is gradually torn apart by her desperation to have a child.

The play has a lot of humour in the early stages, but gets progressively darker, and  parts are absolutely harrowing.

I'm glad I got to see it, but unlike many plays, a part of me is glad that I saw it on screen, not in the more immediate and intimate setting of the theatre.
Posted by Marjorie at 10:01 am No comments:

Loki vs. The Printer

Normally, my printer lives upstairs in the box room, but it's getting a bit temperamental about talking to the wi-fi, so I moved it downstairs where it's easier to turn it off and back on.

I don't use it very often, and I think this might have been the first time Loki's been in the room which I printed something. 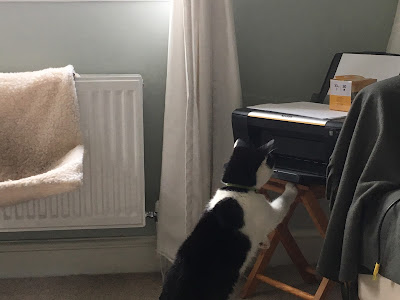 Anyway, as he seemed so interested by the noises it made when I turned it on, I thought I'd video him when it actually printed. ....

Here he is, for your amusement!
Posted by Marjorie at 5:39 pm No comments:

In Which there is cooking

Last weekend was a Bank Holiday weekend, and for the first time in a while, I was neither madly busy and rushing around all over, or away.

So, I got caught up with some boring but necessary stuff, such as cleaning the house, cutting the grass, and trying to reduce the proportion of the 'lawn' which is made up of docks and plantains.

And did a bit of cooking.

First, some honey gazed halloumi, which, though I do say so myself, was delicious, and incredibly easy to prepare. (pro tip. fry thick slices of lemon with the halloumi, and a bit of thyme, the juice means the honey glaze doesn't make it too sweet)  And I had peas and tomatoes from my own garden for the salad.

It only took about 10 minutes to make, which is excellent, particularly as it was such a hot day, so minimal cooking time was ideal. 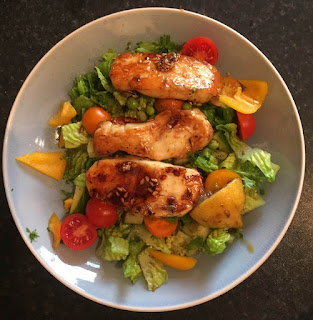 Then on Sunday I tried my hand at a pissaladière. I'd been planning to do some kind of onion/tomato tart, and then in my weekend paper on Saturday I saw a recipe for pissaladiere, so decided to give that a go. 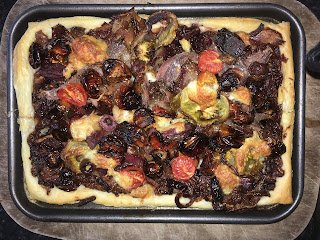 I cheated a little, and used shop-bought puff pastry for the base, but that was the only shortcut. It was good, but I think if I do it again I will seriously cut down on the number of anchovies, as a little anchovy goes a very long way. But the roasted tomatoes and slow cooked onions were delicious, though I do say so myself!

Who knows, next time I might even make my own pastry, too!
Posted by Marjorie at 2:04 pm No comments: