I've seen Lenny Henry on stage a couple of times - to see Othello in 2009, and Fences in 2013, and he was superb in both, so when I saw that he was going to be appearing at the Donmar Theatre I booked a ticket, despite being unfamiliar with the play, The Resistible Rise of Arturo Ui. 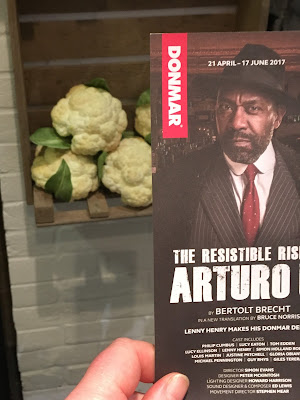 The theatre is small, so performances there are always intimate, but this one is more than usually so. The whole of the stalls seating has been removed, and instead, there are cafe tables and chairs, on all 4 sides of the 'stage' (although there was no demarcation between stage and audience), and 'hooch' on sale - the whole effect being that of a 1920's speakeasy.

Cast members were moving around the space, greeting and chatting (in character) with the audience; I had not expected to have Lenny Henry personally greet me and shake my hand as I took my seat!

For those who, like me, are not intimately familiar with Bertolt Brecht's oeuvre, the play was written in 1941, and is set in prohibition-era, Chicago, covering the rise of Arturo Ui from gangster to politician, in an extremely thinly disguised reference to the rise of Hitler, echoing events such as the Reichstag fire, the night of the long knives and the anschluss / annexation of Austria.

It's very, very good. Although written about the rise of the Nazis, the current production has been updated with some more contemporary references as well - Ui, as he begins his political careers, promises to build a wall, and to make his city great again...

The play has a lot of very funny moments, but also a lot of very troubling ones. Lucy Ellinson, was phenomenal, she was utterly convincing as Emmanuelle Giri (Herman Goring) - completely amoral, murderous, superficially charming, and more than slightly unhinged. Giles Terera as Ernesto Roma (Ernst Rohm) was equally good, tough, loyal to his boss, and not too bright (and, also, murdered slightly, early in Act 2)

The production draws heavily on the audience, with members of the audience co-opted to help move kerosene, and one audience member being hauled out to stand trial for setting the warehouse / Reichstag fire, and eventually we all have to stand (or sit) to be counted.

Lenny Henry  (Ui) himself is excellent in his move from touchy, inarticulate gangster, to smooth (and terrifying) policitician. In fact, he's rather too convincing.

The run ends on 17th June, so there isn't much time to see it, but if you are in London and can get a ticket, it is very definitely worth it.
Posted by Marjorie at 10:26 pm