My visit to the Potter play was on the Sunday, which, as I had to stay overnight afterwards, meant that I had booked the Monday off work and had time for a trip to the British Museum before heading home.

I went to see the Sunken Cities exhibition (which I had originally planned to see when I was in London for the Likely Stories screening, but was foiled by some protesters who caused the museum to close that day).

It's a fascinating exhibition, based on archaeological finds from Thonis-Heracleion and Canopus, cities which stood at the mouth of the Nile and which sank into the sea in the 8th Century BC. (probably due to liquefaction of the silt they were built on)

The remains of Canopus were originally spotted by an RAF pilot in the 1930s, but the discovery of the full extent of the ruins, and their identification as the near legendary cities, did not take place until 2000, when a team of archaeologists led by  Franck Goddio, working with the Egyptian Supreme Council of Antiquities started to map and explore the ruins, and to recover many of the artefacts preserved there. 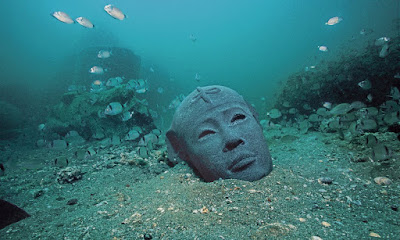 A selection of the finds make up this exhibition, which explores in particular the links, and the cultural connections, between the ancient Egyptian and ancient Greek civilizations. There are also other, connected items, loaned by Egyptian museums

As well as statues, finds included gold jewelry, inscriptions, buildings, ritual objects, and even a wooden barge, preserved almost intact (It's still on the seabed, I believe, but there were photographs) 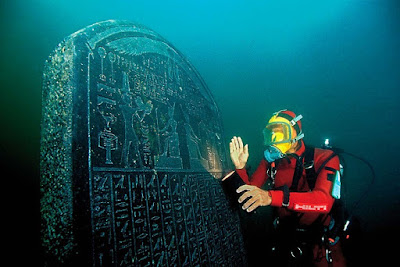 The exhibition provides lots of information about the way that the Greek conquerors of Egypt adapted (and adopted) elements of Egyptian religious life, with gods from each culture being merged.

There is a fascinating section about the mysteries of Osiris, in which priests made models of the god out of a mixture of soil and seeds, and then, once the seeds had germinated, processed in barges through the canals of the city.


Of course, the water did not preserve the papyri or the amazing textiles or painted artefacts that one sees in other Egyptian exhibitions, so these artefacts seemed, to me a least, a little more distant, less relatably human, than (for instance) The Petrie, or even the items in the Egyptian galleries at the BM itself, but it's still very interesting!

I wasn't a big fan of the  piped music played throughout the exhibition, which made me feel a little as if I were trapped in a  New Age lift, but other than that, it think it well done. I would have liked, also, to have been given more information about the technical side of the the archaeological excavations, which the short videos presented didn't really go into.

But over all, well worth visiting!

I then headed upstairs to the old Reading room to see the smaller (and less heavily advertised) exhibition about Sicily: Sicily: Culture and Conquest.

It is absolutely fascinating, very well put together and full of beautiful and stunning things.

I admit that I know very little about the history of the island, so learned that it has been variously invaded and ruled by the Greeks, the Phoenicians, the Romans, Arabs, Normans, the Spanish and finally the mainland Italians, and of course took, and retained, elements of each culture. There are also some unique prehistoric remains, including burials.

There are some wonderful documents in the exhibition, including Arabic maps and manuscripts. 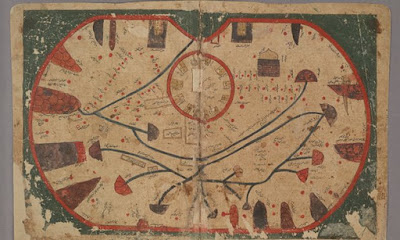 It seems that although the island was repeatedly conquered, for much of its history it was ruled by surprisingly enlightened individuals, so that the North African Arab conquerers built mosques and palaces in their own style, but allowed Christians and Jews to continue, to a gret extent, to practice their own religions and customs (albeit they were required to pay higher taxes for the priviledge, and all important posts were held by Muslims)

Then the island was conquered by Vikings, and after that buy the Normans, in 1072. (Presumably Roger I decided that Sicily was a nicer, and definitely warmer, place to conquer than England - I wonder whether he and William the Conqueror ever compared notes!

Under the Normans, the Arab culture was retained, resulting in the island being far more open and advanced both artistically  and scientifically (at least in the cities, where mosques remained open, and Arab mercenaries served with Christians in the King's service. I gather rural areas were less open minded), so you get churches filled with Saracen-inspired mosaics,and a carved wooden ceiling reminiscent of those you find in the madrassas of Marrakesh.  Astonishingly, given how Jews and Muslims were treated elsewhere in medieval Europe, in Sicily Jews and Muslims had freedom of religion, access to their own court.

Its a fascinating exhibition and left me wanting to visit the island, and to learn more about it!
Posted by Marjorie at 6:00 pm 1 comment:

Harry Potter and the Big Secret (no major spoilers) 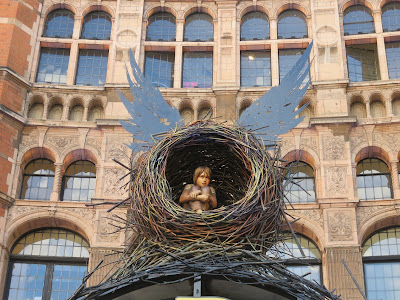 Way back last October, I succumbed to curiosity about what the new Harry Potter story might be, and booked tickets for Harry Potter and the Cursed Child . And, given that you have to buy tickets for two shows, as the story is apparently too long for one, I booked during the preview period when  the tickets were half price!

About 3 weeks ago the tickets arrived.

Last Sunday I caught a train up to London, in order to see the show.

It was a very hot day, so having to queue for security checks was frustrating, although in fairness they were pretty efficient once they opened the doors and got going.

The theatre has been completely redecorated internally, there are lamps with Hogwarts dragons on them, on pillars in the auditorium (and on the canopy outside the theatre) and new Hogwarts wallpaper. 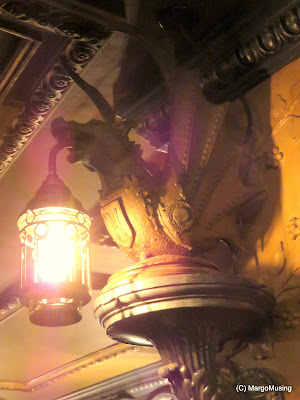 Then of course there is the play itself.

It really is one very long play, show in two parts. Depending on how you book, you can either see the two parts on one day (matinee and evening performance) as I did, or on two successive nights. I think that this is an advantage, as you get to see part two while the end of part one is still fresh in your mind (The break between the two is about 3 hours) 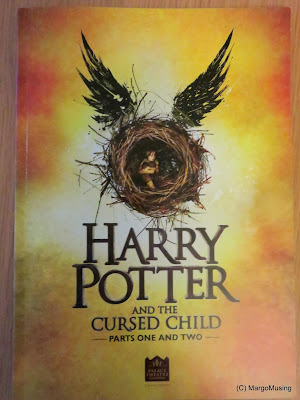 So, what is it like? I'm not going to give a synopsis of the plot, because it hasn't even had press night yet, plus they give you little badges on the way out asking you not to spoil things for later viewers. (although should you decide that you need to know, google and you will find) 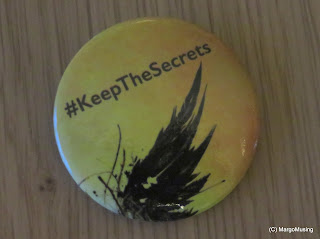 What I will say is that it is spectacularly staged - the stage set has an arching framework reminiscent of a railway station, with multiple clocks, and a rather nice display of the phases of the moon on the front arch. The set also includes (at different time) wood panelled walls, moving staircases and a fascinating bookcase. 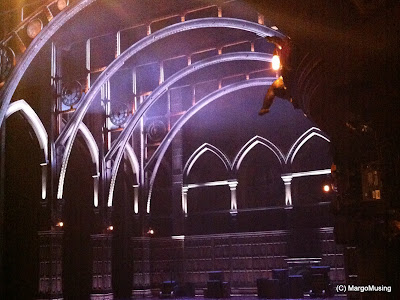 There are lots of excellent,and very well done, special effects. From the pupils joining the Hogwarts Express and 'magically' changing into their robes, to travel by floo powder, entering the Ministry of Magic through a phone box, transfiguration and use of Polyjuice potion, all of which happen on stage.

It's fun to see some of the characters we are familiar with from the books and films. Noma Dumezweni (Hermione) and Alex Price (Draco) were my favourites of the 'old guard' - Ron doesn't get a lot of opportunity to show how he has developed, which is a shame, but he is still a likeable character. Similarly, I'd have liked to see more of Ginny. Draco is perhaps the most developed of the older characters, and also gets many of the better scenes. More than any of the others, he seems to have developed as a person. 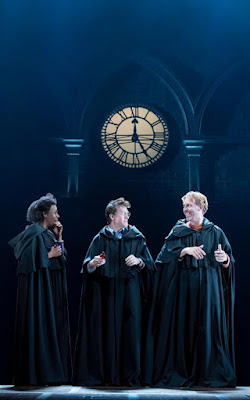 The play focuses upon Scorpius Draco and Albus Potter, and in between the excitement it is about parents (fathers) and children (sons), and the pressures of living up to them them. (and Scorpius)

There are some great set pieces, there are some rather clunky bits of dialogue, to ensure, with sledgehammer subtlety, that no one misses the point. And the plot is both complicated and predictable.

But despite its flaws, it's well worth seeing -  nearly 6 hours of almost constant spectacle, .and as much fun as the books.

I shall be interested to read the script book, to see what is left when it is stripped down to words on a page.

Of course, with the show being sold out until some time next year, if you don't already have tickets it's not going  to easy to try to hold of them, but if you do get the chance to go, take it.

There have been a lot of political things going on, which I've not blogged about, partly because that's not what this blog has been about, and partly because "Oh Fuck" isn't really the basis for a whole blog.

So, not blogging about that.

What can I talk about?

The bees and having their ups and downs. I had to feed them (with sugar syrup) because it was so cold and wet and there is the 'June Gap' when there is less pollen available. And I was dead pleased with myself for having spotted that they were getting low on stores, and choosing to feed them, before a general warning was sent out by the BBKA, which made me feel I was getting something right!

However,it seems I may have lost my queen - I have done a couple of hive inspections and found no eggs or larvae, and I have not seen her (but then she can be tricky to spot at the best of times)

I got a (much) more experienced beekeeper to come and have a look, and he thinks I may have a new queen (which means I need to be patient, to allow time for her to mate, and start laying,which could take 2-3 weeks). He has recommended checking again after a week, and has said that he will be able to give me a test frame (a bit of comb with eggs and young larvae in it) which would allow the bees to build a Queen cell and turn one of the eggs into a new queen if necessary.

In other news, I had a nice family meet up - both of my parents turned 70 earlier this year so we (their 4 children) wanted to take them out to celebrate, which we did, and very nice it was too!

Both the meal, and catching up with all my siblings and their partners, worked out well.

The restaurant we went to was in Cheltenham, and is in an old, art-deco style former cinema, which makes for a rather nice setting for a celebratory meal.


In fact, although I didn't realise it beforehand, it is the restaurant used in filming 'Sherlock', where Watson proposed to Mary

Sherlock did not call in while we were there, however! Bit even without Sherlock, it was a good day!
Posted by Marjorie at 10:08 pm 2 comments: