More Fun - Including travel and food and rainbows

Back in the mists of time, before I knew that Neil would be coming to Bath,and that Nathalie would be coming to see him and to visit me, I booked a ticket to see The Cripple of Inishmaan on Saturday. Which was a pity, as it restricted the time I had available to spend with Nathalie.

But we did our best. We breakfasted on Sicilian style Brioche which Nathalie brought with her, and then caught a train to London. the train was surprisingly full, but we managed to find seats together, and the train was on time, which was a bonus!

Once we arrived we went to Chinatown, and had lunch at a restaurant called Dumplings' Legend. Not the greatest food in the world, although the vegetable dim sum were delicious, and my friend beef Ho Fan was very tasty, too.

As we left the restaurant, the sky was suddenly full of aircraft - a Lancaster Bomber, then some larger and newer planes (one in formation with some fighters) and finally the Red Arrows, in formation (I didn't get my camera out quick enough, but I found some pictures here)  I'm choosing the believe that the fly-past was in Nathalie's honour. I am sure that the fact the it was apparently the Queen's Official birthday and the Trooping the Colour was therefore taking place was purely a coincidence...

After lunch I had to say goodbye to Nathalie, and we parted company. it was lovely to see her, and next time we shall manage (or, it would be fairer to say, *I* will manage better) so we can have a little more time to hang out.
So, at 2.30 I was settled in my (somewhat cramped, and lacking in legroom) seat  in the Noel Coward theatre, waiting to see The Cripple of Inishmaan. It's part of the same season as  Peter and Alice, which I saw in March, and stars Daniel Radcliffe as the eponymous 'Cripple' Billy. I saw him in Equus back in 2007 so I already knew he is more than just Harry Potter. I was not familiar with the play before seeing it, but I enjoyed it - it's a bleakly funny play, set on a small, impoverished island off the Irish coast in the early 1930s. News comes that a Hollywood producer plans to make a film on the neighbouring island, and Billy, the cripple of the title, wishes to be in the film.

Throughout the play there secrets and lies - did Billy's parents drown accidentally trying to get to America, or kill themselves at the thought of having a crippled child, or kill themselves so that their life insurance money would pay for Billy's treatment..? Or was it something still more disturbing?

There's a very strong cast -particularly  Sarah Greene as Helen McCormick (who gets to throw a lot of eggs) and  Pádraic Delaney as BabbyBobby.

And Radcliffe is excellent, both in the comedic parts of the play, and in Billy's frustration with his physical limitations and the poverty and limits of his home.

After the play, I had a smooth trip home, in a virtually empty train, through sunlit landscapes.

The sun was still out as I arrived in Bath,  but as I waited for my train home it started to rain, and there was a glorious rainbow.

It made for a fitting end to a long, and very enjoyable day. 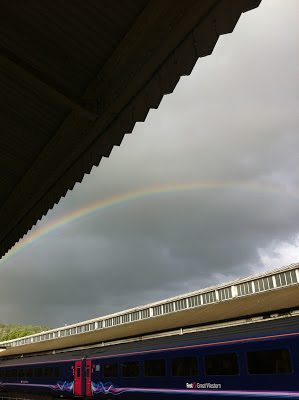