I've posted before about how lucky we are to have two wonderful independent bookshops in Bath, both of which hold regular author events. 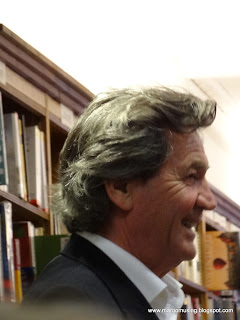 This week I went to another event at Toppings - it was just a smidgen smaller that the last one  - I would guess that there were between 40 and 50 people there.

The author in question was Melvyn Bragg (Lord Bragg) - I think he is probably best known as a broadcaster, but he's also written both fiction and non-fiction. I enjoyed his The Adventure of English, which was both a TV series and a book, and I've read some of his other work, and enjoyed other documentaries he's been involved in, so I was interested to see he was coming to Bath.

He was here to promote his new novel, Grace and Mary, which is  based on a re-imagining of the lives of two women who are based on his own mother (who died recently, after suffering dementia) and her mother. 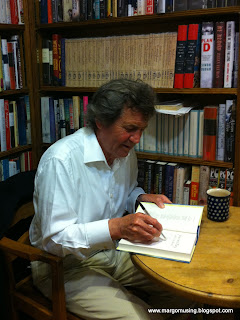 He spoke eloquently about the relationship he had with his mother, particularly in her final years, when she had memories of the past, but not of the present.

Bragg also talked about writing, and his writing in particular. "I would never describe writing as hard work because I was brought up with people who really did work hard!" and that he had not, in the past, found writing autobiographical fiction cathartic - indeed, he said, it had left him unable to write fiction at all for some years, but this story he felt needed to be written.  It was a very personal talk - and this is obviously a very personal novel.

The short readings he gave made the book sound interesting, so I bought a copy, although I hadn't originally planned to. I shall see how it goes.

An interesting evening.
Posted by Marjorie at 4:04 pm