Cyrano - James McAvoy at the Playhouse

I almost missed this - I booked a ticket months ago, but have been unwell with the cold-from-hell-the-will-not-die, and wasn't at all sure that I would be up to a trip to London, but in the end, I decided that I would regret missing it. 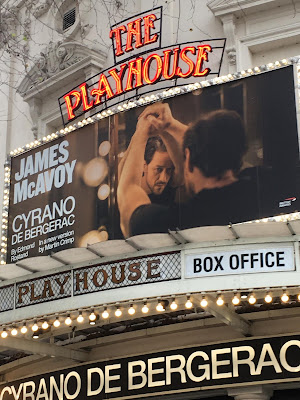 I had avoided reading any reviews so had no preconceptions at all. I haven't ever seen the original play, either.

I very much enjoyed the show - there is virtually no set, a bare stage with hand-held and stand microphones, with the actors in modern dress.

The play draws on rap and hip-hop, and beat boxing - it's poetry, knowing, thoughtful, often gleeful and funny, sometimes raw, but almost always engaging and entertaining

There is, of course, the love story between Roxane and Christian, and the unrequited love of Cyrano for Roxane (not to mention the attraction of christian to Cyrano, which I suspect perhaps didn't appear in the original!)

But it is mostly about  the love of language. And it is glorious. 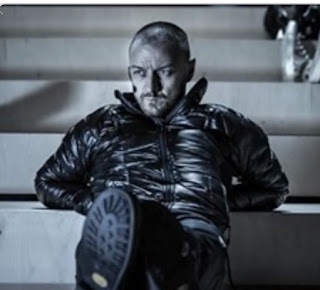 
The run in London run has finished now, but the play was filmed for National Theatre Live, and is well worth seeing if you have the opportunity.
Posted by Marjorie at 8:28 pm