New plays by Tom Stoppard don't come along very often, so of course when one did, it was inevitable that I would book tickets. My friend A and went on what turned out to be press day 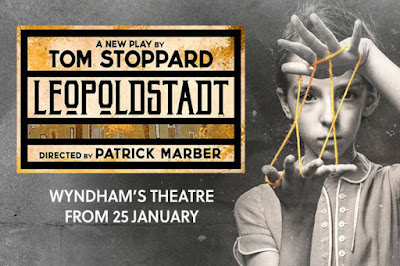 I have very mixed feelings about the play. I really wanted to like it, and given Stoppard's track record, I had high expectations, but I ended up feeling that there was a much better lay somewhere inside, struggling to get out.

The premise is that it follows a single family, living in Vienna, from 1899 to 1955. The family are (mostly) Jewish - Hermann Metz (Adrian Scarborough) , head of the family, has converted and been baptised as a catholic, and married a catholic woman and considers himself to be assimilated into Austrian society. He has ambitions to join the jockey club, is an optimist about the ways in which the Austrian Empire has progressed, allowing Jewish people to leave the ghettos and become accepted in society.


His brother-in-law, Ludwig Jakobovicz, is a mathematician at the University, and is less optimistic,  more resigned to the realities of anti-semitism and a slower rate of change, and primarily focused on his research.

The play moves forward in time, with scenes in 1900, 1924, 1938 (Kristallnacht) and 1955, there is a cast of over 40 people, although the numbers fall over the course of the play, with the final scene having just 3 characters remaining on stage. Almost everything takes place in a single room, which changes from turn-of-the-century richness to the grim, battered state of the room in 1955,. It's an excellent visual reflection of the changing fortunes of the family.

Given that the play follows the fortunes of a Austrian-Jewish family through the first half of the 20th Century it was inevitably going to end tragically, and this is constantly foreshadowed throughout the play, to the extent that is feels very heavy handed.

And that is my key issue with the play - it has an awful lot of  very obvious, repetitive exposition, with characters laboriously explaining things to each other,including things about their own shared personal and family history.

There are parts where the exposition and foreshadowing are done much more subtly, and work far better - for instance, in relation to WW2.

The final scenes were very well done  - the remnants of the family have returned to try to recover their looted art (A Klimt portrait of Hermann's wife, Gretl) and home . The survivors include the character presumably based on Stoppard himself, a young man whose mother was widowed before the war, and remarried an English journalist, who was able to take her and her son to England, in 1938, and to bring her son up as a Englishman, forgetful of his Austrian and Jewish roots, who becomes someone to whom the others can explain what happened.

The play ends listing the names of the characters we last saw in 1938, and their fates.. Auschwitz, Dachau, Suicide....

I think this could have been a very good mini-series, with more time and space to allow us to get to know the multiple characters and perhaps to show more, and cut down on the lectures-to-the-audience , alternatively I think it could be a very good play, if it were perhaps to be edited a little, with a view to trusting the audience a little more.

Posted by Marjorie at 5:23 pm No comments:

Carmen - ENO at the Coliseum

I saw Bizet's Carmen a couple of weekends ago, in a production by the ENO at the London Coliseum. I have had mixed feelings about the previous operas I have seen - I like the music, but find it much harder to suspend my disbelief and get immersed in the show than I do with straight theatre.

I enjoyed Carmen - maybe because so much of the music is familiar, but it has to be admitted that having it sung in English, and therefore wholly understandable, does rather expose the er.. somewhat thin plot.

The story, as far as I could make out, is along these lines:

Despite the downbeat ending, it was entertaining, and I enjoyed it more than the other operas I've seen - I am glad I went. Although I am still not convinced that setting it in the 70s really worked.
Posted by Marjorie at 7:28 pm No comments:


I was in London again to see the final performance of The Ocean at the End of the Lane at the National Theatre, which was just as good on re-watching. 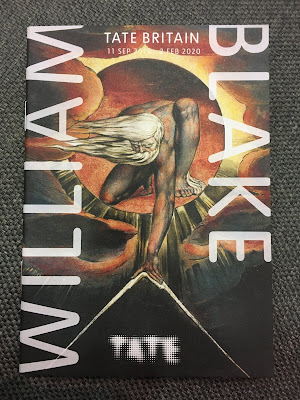 But before that I went to Tate Britain to see their big William Blake exhibition.Like a lot of popular exhibitions, they seemed to have oversold the tickets so it was very crowded, which was frustrating, but despite that, I did enjoy it.

I enjoyed Job, and various angels and demons.
And I especially enjoyed this big-eyed owl! 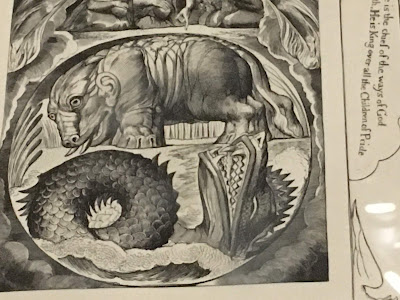 Seeing so much of the art together I was struck by how modern a lot of the art felt, despite having been created in the late 18th C.

Henry VI at the Sam Wanamaker

My friend A and I saw the Globe's trinity of Henrys - Henry IV Parts 1 and 2, and Henry V. last year,so when we saw that the Sam Wanamaker Playhouse next door was ding Henry VI, it seemed like a good plan to go!

Henry VI is 3 separate plays - I've seen the plays once before, in 2013, as 3 separate plays this production is a compressed version of the 2nd and 3rd of the trilogy, so starts with  the arrival of Queen Margaret, and the news that she comes with no dowry, and at the cost of losing provinces in France won by Henry V. Things don't do well, from there...


It's a modern dress production, York appears as a wide-boy type, in a white suit embroidered with white roses, and the others has suitably colour coded and decorated clothes, too. This King himself, Jonathan Broadbent, appears in a hoodie, making him less impressive and memorable in appearance than any of his courtiers, emphasising his passive role.

Later in the play, once the battles started, characters wore sports kit in red or white, emblazoned with their names (and in some cases, regnal numbers) - a costuming choice which  does help to allow the audience to keep the characters and their allegiances straight, but at the same time does downplay the serious nature of the conflicts.

I particularly enjoyed Sarah Amakwah's performance as the strutting,  prickly Edward, and John Lightbody as Gloucester.

However, over all I felt the play was a bit patchy - it dragged in places and felt rushed in others - perhaps as a result of the cuts and merging of the 2 plays.

I am glad to have seen it, but don't regret my decision not to also book for RIchard III, which is part of the same season
Posted by Marjorie at 3:41 pm No comments: