The Lady in the Van

On Friday, I went to Bath Theatre Royal to see Alan Bennett's The Lady in the Van. Which (for those who don't know) is a play which Bennett wrote based on his own experience, and friendship (or at least acquaintance) with 'Miss Shepherd'. Miss Shepherd was a homeless woman who lived in a Bedford Van, and who moved the Van into Bennett's front garden when the Council painted double yellow lines on the street, and stayed for 15 years until her death.

In the original play, and in the film adaptation, Miss Shepherd was played by Dame Maggie Smith and Bennett (on of the two Bennett's in the play) by himself, which have to be hard acts to follow, but I think Sara Kestelman, Sam Alexander and James Northcote did pretty well!


Sara Kestleman's Miss Shepherd was acidic, brusque and generally unlikable, but with an element of vulnerability and pathos which won a certain amount of sympathy. Sam Alexander and James Northcote are Alan Bennett (the one who does, and the one who writes) discussing the situation with each other (or, I suppose, with himself)...

I enjoyed it. (and a day or two later, happened to watch the film, which was an interesting contrast)
Posted by Marjorie at 7:46 pm No comments:

I've recently got back after spending a long weekend in Devon, with my parents.

Its always nice to see them, and they do live in a lovely part of the country.

As the weekend weather wasn't expected to be very good, we decided to make the most of the better weather on Friday, and went for a bracing walk on the coast path, near Trentishoe.

It was windy, but despite very grey clouds at times, we didn't get rained on (although I did do something painful to my knee which made the last bits of downhill walking were very uncomfortable.) 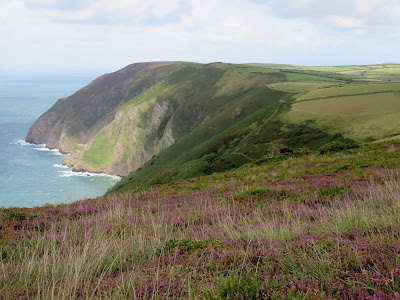 There weren't a lot of other people around, although we did meet some other walkers... 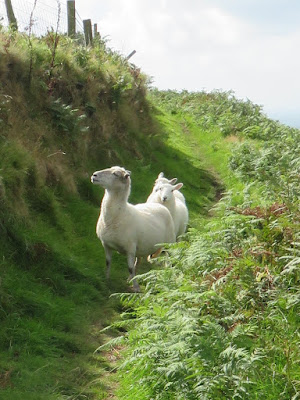 The following day was rather wet, and we avoided any walking due to my knee, but we did take a trip into Barnstaple, to see the elephant.

Did you know that Barnstaple had an elephant? I didn't. Or, to be more accurate, they have parts of an elephant. It died about 125,000 years ago, and found in 1844, and now its teeth and skull may be found at the museum.

Plus they have a large tissue paper elephant in the stairwell. 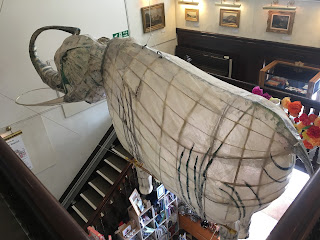 The museum also has a small selection of fossils, some taxidermy, and, and some local history stuff, including a couple of adverts relating to a shop owned by one of my ancestors!

Rural North Devon isn't, perhaps, the obvious place to expect to find a Michelin starred restaurant, but The Mason's Arms in Knowstone is just that.

As it is only about half an hour away from my parent's home, I suggested to them that we pay it a visit, and we were able to get a last minute reservation. Which was nice :)


We were tempted with delicious canapes while we waited for our table - little bites of fish eggs and taramasalata (I think) on puffed rice, decorated with petals, and beautiful little duck 'bonbons' with honey.

The meal itself was also lovely. And very pretty. I was sad that we were all too full to eat dessert. Maybe next time.


The the following day we got to have some unexpected family time - I'd posted some pictures from our walk, on facebook, and then got a message from my cousin to say she was visiting her parents (who live about 12 miles from mine).

So on Sunday, she came over for a few hours, giving me the chance to meet her daughter (15 months old) for the first time, (and her son for the first time in a while!)  which was a lovely addition to the weekend.  H was very taken with my phone, and took about 40 selfies, mostly of the top of her own head! 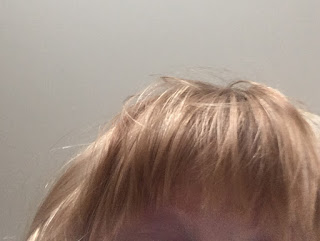 We discovered the 40 year old sticklebricks are still highly acceptable entertainment for small people, as are 30-60 year old dinky toys! 3 generations worth of enjoyment of the same toys ins't bad going!

Altogether a fun weekend.
Posted by Marjorie at 12:12 pm No comments:

Twelfth Night at the Globe

It's been a while since I have been to the Globe, and one of the plays I've seen there before is Twelfth Night, which I saw 5 years ago, in a very traditional production with Mark Rylance as Olivia and Stephen Fry as Malvolio. 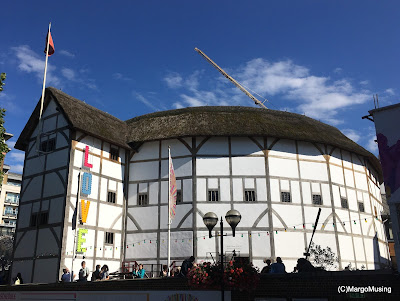 I knew this production was going to be very different - it was directed by Emma Rice, who has now parted company with the Globe, and features Le Gateau Chocolat  as Feste, and has even more cross dressing than is usual for this play.

It is set (judging by costumes etc) in the 1970's, apparently on a Scottish island, so Antonio (Pieter Lawman) and Orsino (Joshua Lacey) were in kilts, and  Sir Andrew Aguecheek (Marc Antolin) was in a pink fair isle sweater and was extremely camp.


Viola and Sebastian (Anita-Joy Uwajeh and John Pfumojena)were both excellent, and both appeared very young, which works well with the text, and the whole thing was fun, and didn't take itself too seriously.

I can understand why Emma Rice and the Globe parted company - this isn't the traditional, Elizabethan style production which the Globe specialises in, although I can't help but feel that if Shakespeare had had the option of including glitter balls, fairy lights, gold  lamé and the fabulous Le Gateau Chocolat in his plays, he would have done so!

The performance I saw was the penultimate performance, so the run is over now, but it was fun while it lasted!
Posted by Marjorie at 8:21 pm No comments:

GWR - Delays and other disasters

When I travel by train, it's almost always with GWR, as they have the franchise for my area, and run the trains from here to London.

Which gets frustrating, as they are, frankly, a bit crap at present - lots of delays, very poor customer service  and the like  (For instance, they claim to process refunds, for delays, in 7 to 20 days. I sent off one in mid June which still has not been dealt with!)

So I wasn't too surprised to find my train to London was over an hour late.

Coming home was worse, though, and involved a new and unpleasant experience, due to a passenger who harassed me, and a member of GWR staff who then ignored my request for help. As in, I explicitly asked him for help, asked him to get this guy to leave me alone, and his response was "Whatever it is, move on"

Fortunately it was verbal harassment,and didn't escalate after another passenger who was more helpful than the member of staff, and told him to back off.

But it certainly took the shine off the day.

Plus, it's now Thursday, and there's been no response to the e-mail complaint I sent, which seem a bit poor. (I know they take forever with refunds, but you'd think they would prioritise dealing with complaints.)

Posted by Marjorie at 7:56 pm No comments: