After seeing Henry V's bit of bling at the Guildhall, I had time for a pub lunch in a rather consciously Dickensian pub, before heading to the Noel Coward Theatre to see Photograph 51, about Dr Rosalind Franklin and her role in the discovery of the double helix structure of DNA.

The play ought to be very good, but I found it a little disappointing - so much of it seems to consist of characters explaining the plot to each other, and it felt as though almost all of them, other than Franklin herself were a little 2 dimensional.

Which was a shame. I wanted to like the play a lot more than I actually liked it, and felt thatthe cast, which were all very good, were let down rather by the script. 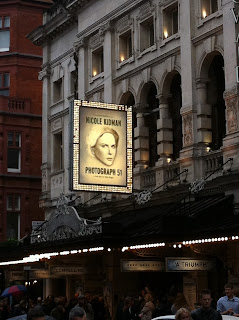 The set was interesting; based on the blitz-damaged cellar labs of Kings College.
Posted by Marjorie at 5:45 pm No comments:

I was in London for the day on Saturday. I had booked to see 'Photograph 51', a play about Dr Rosalind Franklin and her role in the discovery of the double helix structure of DNA, but I arrived early enough to have time to go first to the Guildhall Gallery where there is a temporary display commemorating the 600th Anniversary of the battle of Agincourt. 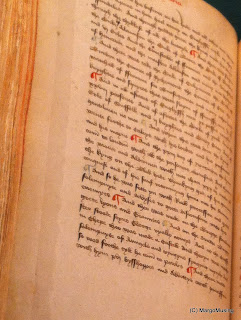 There is the Great Chronicle of London, displaying an account of Henry V's entry into London following his victory. 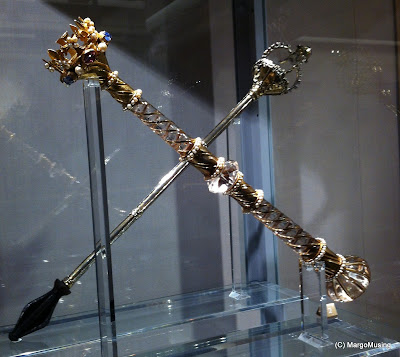 The centrepiece of the exhibition is the Crystal Sceptre (also known as the Crystal Mace) which was a gift from Henry V to the City of London, in thanks for their having loaned him the money (around £4M in modern terms) to finance his campaign.

The sceptre is made of rock crystal and gold, and apparently (and with a touch of irony) the crystal parts were, almost certainly made in France! 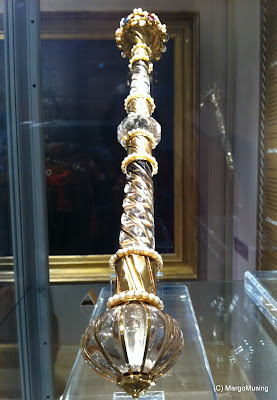 The whole thing is beautiful, and I found it amazing that it has, apparently, never been put on display before (it is used each time a new Lord Mayor is installed, but apparently they only hold the box, and it does get an airing when it is carried by the Lord Mayor during coronations, so I suppose people may have caught a glimpse of it in 1953)

The second item on display is the Hedon Mace - it belongs to the town council of Hedon, in East Yorkshire, and is believed to be a mace used at the battle of Agincourt, which was then coated in silver gilt, and was given to the town by Henry V when he granted a charter to the town in 1415.

It is believed to be the oldest surviving ceremonial mace in the country, and looking at it, one of the things which stands out is that despite the gilding and engraving it is still, very obviously, a weapon. You can imagine a medieval Brian Blessed wielding it to lethal effect!

Its on display until 3rd December.

I'm very lucky to live close to Bath, which has two lovely independent bookshops, Mr B's and Topping and Co Books, both of which regularly arrange events and signings.

One of the most recent was an event organized by Toppings, featuring Professor Mary Beard, who was in Bath to talk about her new book, S.P.Q.R.

Prof. Beard is a very interesting speaker: she spoke about how questions may be raised about whether there is a need for more books about the Romans, and a lot of what she spoke about were the new developments in archaeology which have produced new information and new insights into the past, but also made the point that historians in each age ask different questions, so of course what they discover, and how they interpret information, varies.

One example she gave was that in the past, (male) historians have tended to assume that Roman barracks were very masculine spaces , but the number of children's shoes 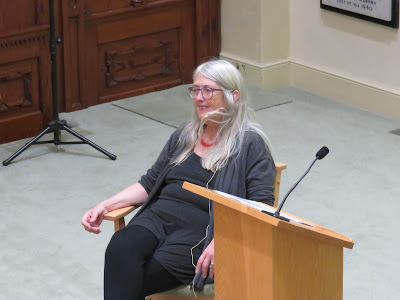 Beard spoke about a number of recent developments and discoveries which have provided new information, for instance:

- Analysis of teeth from Roman burials which show the climate (and therefore, to an extent) the region, in which people spent their childhood (or at least that part of it during the period their 2nd teeth were growing in). This has been particularly interesting in looking at the teeth of Roman Britons. It seems that around 20% of the Roman population grew up in significantly warmer climates,which suggests a much greater degree of movement within the Roman world than previously thought.

- Analysis of the material found in cess-pits in Herculaneum, which gives information about the diet of ordinary people, whereas in the past, the main evidence has been from Roman writing, where descriptions of food have tended to be about the banquets of the rich, not about normal, every day food. The new evidence shows that ordinary people in Herculaneum were eating a lot of fish, chicken, eggs, figs, sea-urchins, pork, and pepper (which would have been imported, and presumably, expensive)

As well as new scientific evidence, she explained the there are also, still, new literary discoveries to be made - around 10 years ago a new essay of Galen's was discovered in the library of a monastery in Greece.

She explained that she Chose S.P.Q.R. as title as she wanted to include and focus on the 'Populi' - the people of Rome, not just the senate or aristocracy - and in particular to think about women and their role.

I would like to read the book, but admit that I shall wait until it comes out in paperback - the hardback is vast and heavy! But I may be re-reading her book about Pompeii in the mean time!
Posted by Marjorie at 9:28 pm No comments: