..in case you were wondering.

The snow in my street has mostly gone, washed away by the sleet. But the higher parts of my drive to work are still snowy.

Also - did I mention it's still cold?

Email ThisBlogThis!Share to TwitterShare to FacebookShare to Pinterest
Labels: cold

It stopped snowing yesterday afternoon, but stayed very cold, so today the pavements and the road in my street are all sheets of ice, as there's been enough traffic to compact the snow, but not enough to clear it. It looks as through the roads further out are mostly clear, so I should be able to get to work on Monday, provided we don't get more snow. Although  getting to the end of my own road is likely to be interesting, knowing that the road is clear beyond that is reassuring 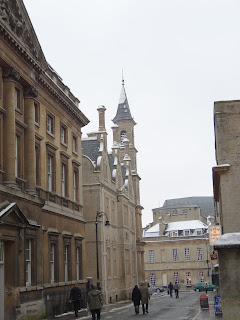 I went out this morning to see how bad the going was likely to be, and then walked down to the station in order to get a train into Bath,  to go to the theatre.

The train was late, and horribly crowded - to the extent that there were people unable to get on, at Avoncliffe. It turns out that Bath Rugby were playing at home this afternoon, which no doubt was part of the reason for it being so crowded. It makes me hopping mad that they never put on any extra trains (or even extra coaches) despite that fact that trains on match days are *always* packed. I imagine that the snow and the lateness made it even worse than usual. And they have just put the fares up. Grr.

Once I got to Bath, I grabbed a pasty for lunch, and took a few photos of nice buildings with snow on them, then back to the theatre to see 'Quartermaine's Terms'

The play, by Simon Gray, is set in a school teaching English as a foreign language, in Cambridge in the 1960s, and is presented as a series of scenes in the staff room, over a period of around 2 years.

There are lots of funny moments, but the play is ultimately a tragic one.

All of the characters experience their own personal disasters, whether in the shape of an unfaithful husband, a dependent and critical mother and unsuccessful love life, a daughter's suicide, a partner's death, snobbery and lack of professional appreciation or family breakdown and failure as a novelist. Everything is presented through the medium of staff room conversation, so practically all of the drama takes place off stage, and we only ever get a partial and understated view of anything.

Quartermaine himself (Rowan Atkinson) presents as, perhaps the saddest of all. He appears to be a well-meaning but ineffectual teacher, and to have no life beyond his job.  Throughout the play he is ignored or taken advantage of by his colleagues, who use him as a babysitter for their children, but forget or turn down his own invitations, and the play finally sees him facing the loss of his job.

There was a little too much of Mr Bean in Rowan Atkinson's performance for my taste, pushing his character from pathos to ridiculous once or twice, but despite this is was an interesting play, and I'm glad I was able to see it.

It is going to the West End now, for (I think) a couple of months - I shall be interested to see what the critics make of it. 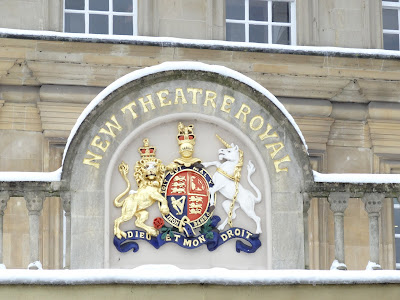 My train home was late, which was actually a good thing for me - it meant I was able to get on a train 10 minutes after getting to the station, instead of missing one by 3 minutes and having to wait half an hour, and it was reasonably empty, too, so I got a seat.

The walk home from the station was hard work, due to the ice, but having spent a lot of time over the past 48 hours looking for my yaktrax I gave up and bought some new ones (well - these) when I was Bath, so I was able to walk safely.

And I called into one of the local mini markets on the way home and bought a lime, so the well-earned G'n'T I gave myself when I got home could be properly garnished.

Tomorrow, I think I shall try to make another batch of marmalade. It's a nice, warm, indoor occupation.
Posted by Marjorie at 9:40 pm No comments:

The BBC has been forecasting heavy snow for today, in tones appropriate to an impending apocalypse. I have to admit that I was a bit sceptical, and was expecting to wake up to a heavy frost, or a dusting of snow. However, just in case, I did decide that I would do my grocery shop on the way home last night, rather than on my way home tonight.

However, it turned out that they were right, and I woke instead to about 2" of snow (Not a lot, by the standards of those places which have proper winters with 6' drifts, I know, but a lot for us here)

I still thought that I would be able to go into work, but by the time I was ready to leave, 90 minutes later, I decided that would not be such a good idea, as it had been, and still was, snowing quite hard, in additional to which the local police were advising against any but essential journeys, and I saw my opposite neighbour leave, slithering all over everywhere, so I decided that working from home would be the better option.

I think I made the right choice - we ended up closing all of the offices at 2pm so everyone could get home, and I think all of those who were able to get in were either close enough to walk, or had 4x4s.

It continued to snow for most of the day,and we ended up with about 5" of snow, and the bits of road around my house had just enough traffic to compact the snow into a icy mess. 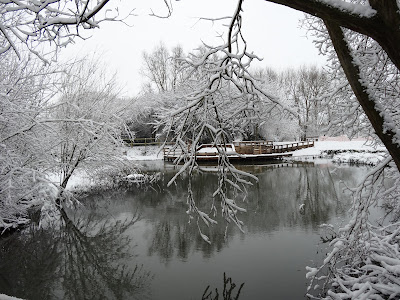 I spent the morning working, but did go out a little later for a short and chilly walk in a monochrome world. 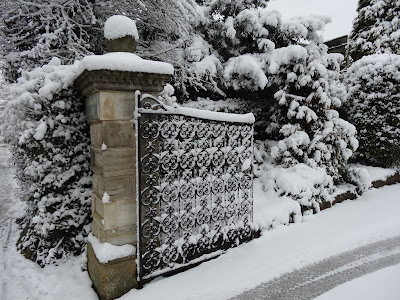 There were lots of bits very decorative bits of ironwork, and the few other people out and about were all friendly. And of course, getting a bit of fresh air and exercise is always good! 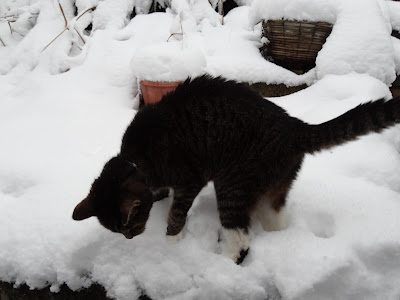 I'm not sure Tybalt agrees about that part. He approved of me being home all day, and he approved of the heating being on all day, but he very definitely didn't approve of my poor management in allowing all this cold, wet stuff outside the back door and the front door at the same time!

I was supposed to go to the theatre this evening, in Bath, but that isn't going to happen, as I can't drive there (It's further, more hilly, and on smaller roads than the trip to work would have been, and it's now dark and freezing...) and although I could potentially get a train in, it would involve a cold, dark walk to and from the station, and probably a wait of about 40 minutes for what would be the last trian back, which of course may be cancelled. Fortunately the theatre was very understanding and I was able to change my ticket for one for tomorrow's matinee (when, assuming the snow hasn't gone, I should be able to get trains both ways). It's not such a good seat, but much better than missing the production altogether (tomorrow is the last day).
Posted by Marjorie at 5:58 pm 1 comment:

Email ThisBlogThis!Share to TwitterShare to FacebookShare to Pinterest
Labels: an apology to the BBC, Snow, winter

Marmalade and Exercise - a study in stickiness

It's turned very cold again these last few days,and they are threatening us with snow, although I suspect it may not come this far south. I think we may get it as sleet or rain, instead.

On Friday I went into town and bought around 6 lbs of seville oranges, to make marmalade, and yesterday evening I did the juicing and chopping peel stage of the first batch (using around 2 lbs of oranges, which is as much as will fit into my largest saucepan without overflowing at the boiling sugar stage). By the time I had finished, it was too late to finish the whole process, as the peel has to be boiled for about 2 hours, to soften it, before you add the sugar, so I left it all to soak in water over night.

This morning turned out to be very cold and frosty but also clear and sunny. This is the sight which greeted me from my bedroom window as I made the bed. 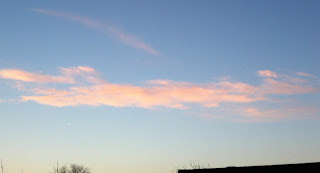 As my friend Spacedlaw commented, ideal weather for a walk. I agreed. I spent the morning making marmalade, but once that was done, and a dozen jars sitting cooling (and, I hope, setting!) in the kitchen, I set out for a walk.
It was cold and bright and beautiful, but also very wet and muddy.
And did I mention cold? I took a circular route, and the sun went it when I was at bout the most distant point, so the second half of the walk was both colder and, as a result, brisker, than the first half!

When I got home (at which point I had to change not only my shoes, but also my jeans, as they were so muddy) I was happy to find that my marmalade seems to be setting nicely.

And I was very good, and have cleaned up both the walk-related muddiness, and the marmalade-related stickiness, and vacuumed everywhere, so I have a nice clean, citrus-scented house, and a marked feeling of accomplishment.

It's that time of year again. When the Car Insurance needs to be renewed.
And the insurer sends out their renewal documents, and their letter, explaining that they have tried all they know, with their expert knowledge and experience, to find you the absolute best price on renewal, and then you do some research and discover that, if that is the case, they are obviously really, really crap at searching, since you can find 10 or 20 quotes for the same cover for less. Usually including one from the same company...

Which, even for an insurance company, is pretty bad.

So, Zenith, no, I won't be renewing with you.

The policy I have now bought cost less than 80% of what I paid last year.( I didn't go for the cheapest quote, as the companies concerned were ones with poor reputations for customer service). So, the 10 minutes or so I spent shopping around has saved me over £70, compared to what I'd have paid if I'd just accepted the renewal quote. And, as it happens, the cover is slightly better, too!

I suppose that enough people must just auto renew to make it worth their while to lose the custom of the rest of us, but I can't help thinking it would be nice if you could trust the buggers.

Oh, and apparently paying for car insurance triggers the automatic fraud alert on your credit card. Who knew buying insurance could be such a suspicious activity?
Posted by Marjorie at 6:05 pm 3 comments:

I can't help feeling that the first post of a new year ought to be exciting and contain lots of new things, but I haven't any new and exciting things to share.

I still have a cold, and  this week feels as though it has been going on for ages, despite being a short (3 day) working week.

So I'll just have to say Happy New Year everyone, and let us hope that 2013 brings good things, (and a little less rain than 2012)
Posted by Marjorie at 8:02 pm No comments: