Late last year, Neil Gaiman tweeted about a production of ‘Neverwhere’, due to be staged at Reading’s Progress Theatre, and as soon as I could, I booked a ticket for myself.

The production runs from 19th-28th January , and my ticket was for last night’s performance. Reading is about 75 miles from here, so it was quite a trek.  I had an uneventful drive down except for the bit in Reading where Tim, the disembodied voice who lives in my SatNav, got very upset with me for refusing to go down a bus-lane, and then refused to speak to me for a bit after that, (“lost satellite signal” indeed!), but happily he relented in time to tell me how to find the side-street which the theatre is in.

Having done so, I had about an hour to spare, so I wandered down to the nearest pub where I was delighted to find not only the expected beer, but also a remarkably good burger (although either I mis-read the menu, or one lettuce leaf, wilted to a sad remnant of its real self,  constitutes a salad these days). But the beer was good, and the pub was warm, and there was no piped music, no TV, and a shelf of books available. 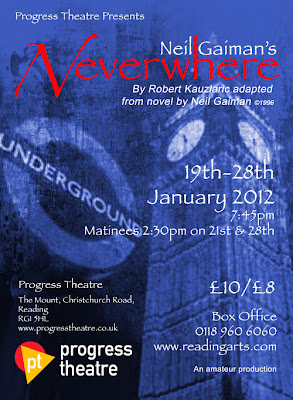 The Progress Theatre is very small – it seats just under  100 people, and it appeared to be very nearly sold out. (I've no idea whether there are any tickets left for other performances - the theatre's own website is down for maintenace at present but the box office number is 0118 960 6060.


The production was, I thought, excellent. It was very faithful to the novel. (I think also to the TV show, especially with some of the visuals, but I have not watched that for a long time, so I may have missed some) There were some places where scenes were cut – (the Marquis de Carabas’s meeting with Lear, the ‘Angels over London’ exhibition and, to my regret, the Nice Cup of Tea  element of the Black Friar’s Ordeal)


I enjoyed the various visual grace notes – in the Floating Market scenes the set included various coats of arms, relating to different characters or fiefdoms, some of which were immediately obvious (Hammersmith, Serpentine/Seven Sisters) others (Shepherds Bush, Earl’s Court) took me a little longer to work out. There was also very imaginative use of lighting and projections to help augment the sets – very effective, especially regarding Door’s ability to open doors, and the moves from London Above to London Below.
I was particularly impressed with Mr Croup (Alex McCubbin) and Mr Vandemar (Craig Daniels), although I was a little thrown when they first appeared, as Mr Vandemar looked very much how I’d always imagined Mr Croup looking, and Mr Croup looked more how I’d seen Mr Vandemar in my head, (there was a definite nod to Cain  and Abel in 'Sandman', too, in their appearance)  but both of them projected a real sense of menace.


I also greatly enjoyed the way that the black humour of the original were retained. Well worth seeing, both for fans of Neil’s work, and for newcomers.  I’m very glad I went.
Posted by Marjorie at 6:01 pm 1 comment:

It's that time of year again: there are Seville oranges in the greengrocers' shops, it's cold outside, and I am (literally) scraping the bottom of my last jar of 2011 marmalade. So it must be time to make the entire house small of oranges by making marmalade. 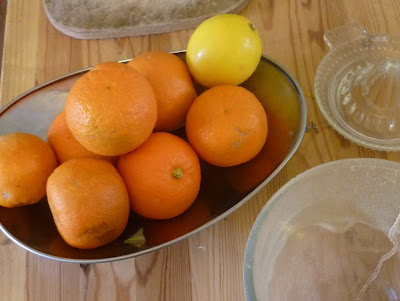 Saturday  was very cold - it's been a very mild winter so far, and I've only had about 2 days when I've needed to scrape ice off the car before heading into work. There was a very heavy frost, coupled with that very bright, cold sunshine you sometimes get in winter, and a perfectly clear, perfectly blue sky. I walked into town and found that the marmalade oranges were in stock at the greengrocer's (they weren't, last weekend) so I bought lots, popped into the corner shop on the way home for shedloads of sugar, and spent much of Saturday afternoon making my first batch, and much of Sunday afternoon making the second.

So far, the first batch is looking good - it's got a nice set, and the peel is well distributed through the jars. Today's batch is not looking quite so good - it looks as though the peel is rising a bit, especially in the fist couple of jars I filled,  which means that I didn't leave it quite long enough before putting it into jars, but the taste seems fine, so it's many aesthetic! I am always a little bit worried that I'll leave it too long and end up with a saucepan full of solid marmalade, instead of neat jars full.

I've probably made around 12lbs of marmalade, and  have another 4lbs of oranges, (which will make around the same quantity) so will probably do some more next weekend, provided I can source a few more empty jars by then.

Having spent most of the last week eating very dull, not-very-good-for-me meals because I felt too tired to cook properly when I got in from work, I also took the opportunity yesterday to make a big batch of chili / spaghetti sauce, most of which I have frozen, so I have enough for 7 or 8 meals, so the next few times I'm too tired to cook I can have real, home cooked food without having to do any real cooking.

I also renewed my car insurance, which was, as it so often is, a frustrating exercise. My renewal from my existing provider was just under £100 more than last year, for the annual premium. Shopping around, I managed to get it to £45 less than last year (and with a slightly lower excess than the renewal quote, but otherwise an identical policy) - the really irritating part being that this is actually with the same insurer - but even knowing this, they wouldn't price match so it is treated as a new application, not a renewal, and I have to faff around sending copies of my licence and renewal notice. It seems such a waste, and just goes to show how much insurers rely on inertia to take advantage of their customers. I'd love to see an insurer genuinely reward loyal customers, with lower prices for sticking with them, but I doubt it will happen.

I didn't get around to spring cleaning the spare bedroom, which is next on my 'to-do' list, but all in all I feel the weekend has not been wasted, and I shall be able to settle down to enjoy watching 'Sherlock' with a clear conscience, this evening!
Posted by Marjorie at 7:00 pm No comments:

Oh dear, I've not really got on with the blogging this year, have I? Since going back to work I seem to have had no time or energy for anything else. But it's almost the weekend, so: quick update time.
Tybalt is doing much better. He had a further check up today, as he's now been on the meds for a month, so he has to have blood tests so they can check that he's having the right dosage. He'd put on another 300g, which means he has gained nearly 2lbs since he started treatment. He is, of course, not at all happy with me for taking him to the vet - and 3 times in a month is, he makes clear, wholly unacceptable. I have given him a spare sardine, however, and I think he is considering forgiving me...

In other news, I've been very busy at work - I seem to have spent vast amounts of time in court this week, mostly with good outcomes from a professional perspective, although sad in other ways. (A child being removed from parents is never good, even when it is the least-worst option for the child concerned..)

There have been a few other things going on causing me a lot of stress, which always causes me to sleep badly, so I get stuck into a cycle of sleeping badly, so having no energy to do much except work, which in turn means little time or energy to do anything fun, which adds to the stress... All of which means that life becomes a little dull, and there is nothing to blog about.

I shall try to do better this weekend.
Posted by Marjorie at 7:22 pm 1 comment:

I spent New year's Eve with both my sisters, and my soon-to-be brother-in-law, and one of C's friends from Uni, at K and C's flat. K and C spent Christmas with his parents, so we hadn't seen them, which meant that the first order of business, (after hugs and tea, of course) was a degree of gift exchangage)
K, E and I went out during the afternoon for a very brief and bracing walk along the beach at Southsea. It was rather chilly, so we didn't go far. 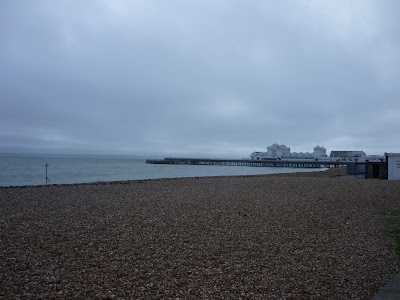 We stayed in for the evening - K and C cooked - canapes,  spicy butternut squash soup, and duck breast with plum sauce. I think its possible that there was a cheese course planned, but what with mojito fizz, and red wine, and nuts and nibbles we didn't get that far!

As New Years go, it was fairly quiet, with chat, and card games, and eating and drinking. I think I ended up going to bed at around 1 a.m., before the Quality Street fight started (it turns out that a carelessly aimed toffee finger can cause a nasty bruise...)

On New Year's Day we were, surprisingly, feeling a little languid. Some of us got up, at the crack of noon, and started the year with bacon butties and copious quantities of tea and coffee. We didn't go out for a bracing walk, or an even more bracing sail, as it was pouring with rain, and the idea was wholly unappealing.

C cooked a roast chicken for supper, and I then came home, for an early-ish night. Today is a bank holiday, which is nice, as I've been able to catch up on some sleep, and do a few chores, and it also means that this will be a short week at work, so we should be able to ease back to the daily grind.