This week has mostly involved little, calm but nice things. Many of them food-related.
On Monday, on of my colleagues who is a member of a local shoot, gave me 2 brace of pheasant. He explained that he'd brought 4 birds as some of them were quite small, which was kind of him, but rather overlooked the fact that there is only one of me, so even a small pheasant goes quite a long way!

Anyway, I decided that I lacked the patience to pluck that many birds, so I skinned them (well, 3 of them) instead, which is much quicker, and two of them were casseroled with cider and apples (which worked very well - and which leaves me with at least 3 more servings in the freezer, for high-quality dining the next few times I don't want to cook properly!) One went to a friend, and the last one is in the freezer (jointed and de-feathered. Putting a feathery one in the freezer would be weird) awaiting further inspiration.

Tuesday evening was spent with relatives - my Dad's cousin M (a very young 80 year-old) invited me over for dinner, and to see our mutual cousin, J (who is the one I visit in London, and go to the theatre with, and who is the same age as my dad) I enjoyed the evening - it's nice to have a meal which I haven't had to cook for myself, and it was also very pleasant to simply sit and chat.

Then I managed to do some early Christmas shopping, as I found myself in Bath at lunch time, after going to court,  which meant I DIDN'T need to go in on Saturday, which was a bonus! It meant I got to go to the library on Saturday, instead. And to catch up with chores at home, which is good, as things are now tidier with fewer heaps-of-stuff. And I got to read two Amelia Peabody novels over the weekend.

The Bath Christmas Market has opened this week - lots of nice things, although as I get older and crankier I find I'm less and less willing to buy the kind of things which will be amusing for 10 minutes, and then will gather dust for the rest of their existence.  In fact, what with that trip, and the wonders of online shopping, I've done a lot of my shopping - just have Awkward Men, a 5 year-old boy and a few stocking fillers still to do.  Which is good. It means I don't have to get too stressed about shopping. although I will have the wonderful queueing-in-the-post-office with parcels event to do.

And I just realised that the stamps I have for sticking on cards for the USA all have George III's portrait on them. They beat him in the end, so no ones going to be offended, right?

This weekend I have a day-trip to London coming up - I'm meeting up with my cousin J and his partner, and we're having lunch and then seeing the Southwark Playhouse's production of Diana Wynne Jones' 'Howl's Moving Castle' - should be interesting.
Posted by Marjorie at 9:31 pm 1 comment:

This weekend, I'd arranged to go down to Devon to visit my parents. I saw them last weekend, while they were staying with me  while they went to a dinner locally. This weekend however was a visit just to spend some time together. And the weather was nice, too.
One of the nice things about visiting my parents is that as long as I don't get up too early, I usually get a cup of tea in bed ;-)  I love that little touch of luxury. 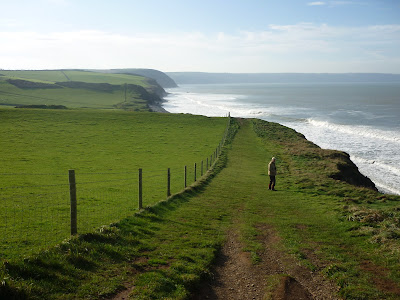 We decided that a nice walk by the sea would be an appropriate thing to do with a bright November morning, so we went to Westward Ho!, which is an uninspiring town, but where you can start a walk along the top of the cliff, and then down to a pebbly beach. 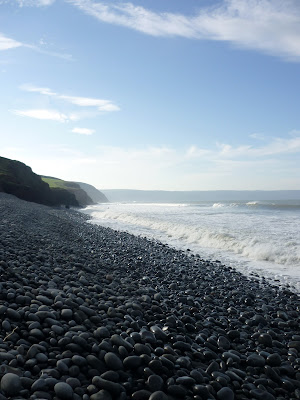 There was an offshore breeze, and very big waves, so there were a lot of surfers out, and despite being the middle of November, it has been so mild that there were still quite a few butterflies and dragonflies around. 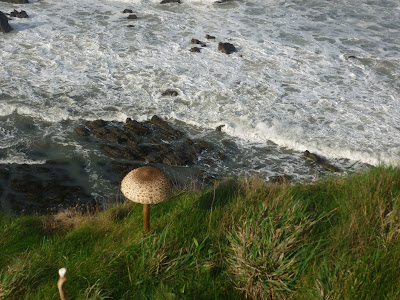 And a really big mushroom, right on the cliff edge!
We didn't have a long walk, as my mum and dad wanted to get back in time to go to a local history talk in Bideford, but it was very pleasant. 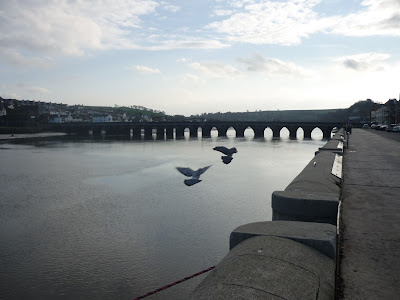 While the talk was going on, I wandered around Bideford, and admired the bridge, and looking into a few shops, and a little later, we all went back home for a delicious meal of roast beef, Yorkshire pudding and then lemon meringue pie. All very good.
Sunday, we had a lazy morning, them they went out to Exeter for some ringing, and I came home, to be greeted by a very snuggly cat. Over all, a very relaxing weekend!
﻿
Posted by Marjorie at 7:09 pm No comments:

Ooops, it's been weeks!

I haven't had a lot to blog about. My car got its annual service, and I got my flu jab, but neither of those is very exciting!

Last weekend my parents came to visit, as they had a dinner to go to near here. I always enjoy seeing them, and I had had a really shitty week at work and was feeling very stressed, so it was lovely to have company to distract me from brooding too much over things I couldn't do anything about until Monday morning...

On Saturday we did a little early christmas shopping, distracted only by the police doing a fingertip search of the High Street, and then on Sunday, which came a gorgeous sunny day, we went to Stourhead for a walk. 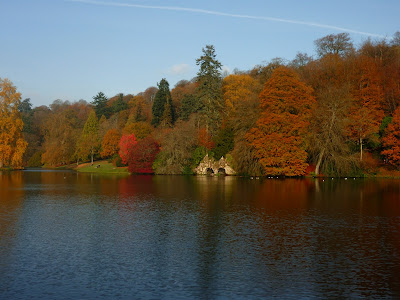 The colours were even better than when I was there a couple of weeks ago - mainly because the sun was out this time. 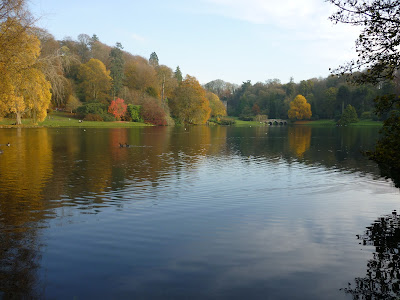 In addition, we saw a heron. I don't think there is much risk it will go hungry - we aslo saw lots of leaping fish, in the lake. 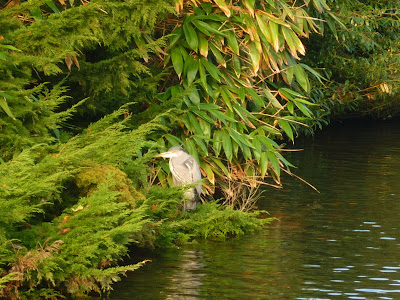 There may have been a cream-tea before we went home, too.
Posted by Marjorie at 8:27 am No comments:

In Which I am Fascinated

Back in August, Nail Gaiman tweeted about the shows he was enjoying at the Edinburgh festival. One of them was 'Fascinating Aida' - and he exhorted all his readers to go to see them. I hadn't heard of them before, but when  looked I them up, I saw they were due to play in Bath on 30th October, so I bought a ticket, and so, on Sunday night, I found myself in the Theatre Royal, not entirely sure what to expect, but hopeful I would have a good time.

All too soon, the evening came to an end. The final song was dedicated to Bath itself, "your Roman ruins are extensive, but your pumproom teas are too expensive"...

Watch the videos, they give you a far better idea of what these women are all about that I can. and in the event they play anywhere near you, go to see them, You won't regret it. (unless, of course, you are of a sensitive disposition!)
Posted by Marjorie at 7:10 pm No comments: